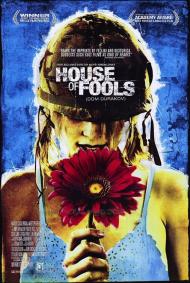 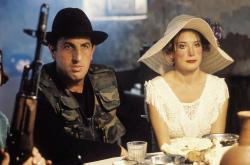 Sultan Islamov and Julia Vysotsky in House of Fools.

Some movies lift the spirit by taking us out of our real lives and giving us a few hours of welcoming entertainment. Other movies, such as the compelling Russian war drama House of Fools lift the spirit in a vastly different, perhaps less entertaining, but far more visceral manner.

House of Fools, which was the official Russian selection for Best Foreign Language Film for Academy Awards consideration, tells the story of a group of inmates in a psychiatric hospital. At first the inmates are blissfully oblivious to the war raging all around them between Russian soldiers and invading Chechen rebels. Then one morning they awaken to discover the entire hospital staff has run off leaving the patients to fend for themselves. Just as the inmates are in the midst of deciding to stay or flee they are interrupted by a group of Chechen soldiers who use the hospital as a temporary HQ.

Janna, a beautiful young woman obsessed with pop singer Bryan Adams, falls in love with one of the soldiers. Janna, along with fellow inmate and poet, Ali, are the two most 'sane' of the patients. Through them we are shown just how thin the line between reality and delusional fantasy can be. Janna plays the accordion and leads the other patients in exercise classes. Ali is the one that keeps them all together and safe as the chaos of war descends on their peaceful, if confined, world. Julie Vysotsky (in her first starring movie role) and Stanislav Varkki are the glue that holds the larger picture together. They support the structure of the story that filmmaker Andrei Konchalovsky beautifully crafts.

Bryan Adams appears in a few fantasy scenes as himself. These surreal moments contrast nicely with the realistic style of the rest of the film.

House of Fools is not for the squeamish or those looking for escapist entertainment. The violence of war is graphically depicted. In one memorable shot Janna is sitting in the dirt in hysterics because the Chechen soldiers, including the man she has fallen in love with, are leaving. Suddenly we see a shadow over her head and then an army helicopter lands on the ground and explodes maybe thirty feet behind where she is sitting. This movie takes a hard look at the human condition and shows that the most noble of spirits can be found in the most unlikely of places.