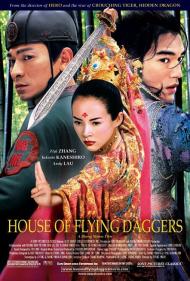 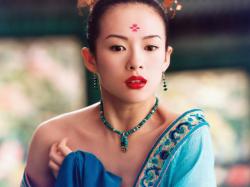 The House of Flying Daggers is a beautifully filmed movie with colors that seem to leap off the screen and massage your eyeballs. Its action set pieces are well filmed and executed. If only the plot had been worked out as carefully as the cinematography and stunts. Instead it is hampered by one too many plot twists and a large heaping of melodrama.

Set in China near the end of the Tang Dynasty, the plot revolves around two police deputies, Jinn and Leo, attempting to locate and kill the leader of a rebel faction known as The House of the Flying Daggers. To this end they capture Mei, a blind dancer from a local brothel whom they believe to be an agent of the Flying Daggers. After she refuses to reveal any information, Jinn pretends to break her out of their jail and offers to help her return to her group. As the duo journey to safety they begin to fall in love. Unfortunately for them, almost no one is whom they claim to be, nor is their motive the stated one.

While the love story and its associated betrayals are pure soap opera, the action is so beautifully filmed that it's more artistic than violent. Near the beginning of the film, Leo challenges Mei to an echo game. She stands in a circle of drums. When he throws beans that strike the drums, she must hit the drums in the same sequence as the beans. As she strikes the drums, while using the most extraordinary combination of martial arts and ballet, the scene is dazzling, particularly at the end when Leo throws the remaining beans all at once and Mei, using the magical abilities that all heroes of these types of movies seem to possess, manages to remember and strike the drums in the same order as the dozens of beans did.

The several battle scenes later in the movie are equally as beautiful to watch. Again, it's almost more like watching a dance than acts of violence, and all filmed with such lush and vibrant colors.

It's only when the plot and the talking interrupt the choreography that the movie loses its way. There are so many plot twists involving who knows what about whom and who's working for whom, that the story unravels. Each secret revealed nullifies some earlier plot point. Because if he knew that about her, than why did he act that way in an earlier scene? Working from the end of the movie backwards, it becomes obvious that the story just doesn't hold together.

Whatever problems there are in the plot are instantly forgiven whenever the action starts, but sadly, at nearly 2 hours in length, the dialogue scenes outnumber the action ones. Since trimming the script would only have reduced the number of plot inconsistencies, it's a pity that this movie wasn't edited down to an hour and half.

For sheer beauty, this movie is hard to match, while your mind might be bored, your eyes are never anything less than dazzled.