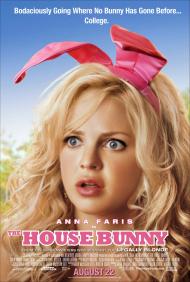 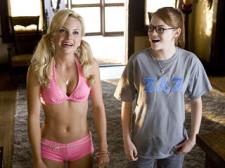 The playboy bunny meets the nerds.

Shelley is a playmate living in the Playboy mansion. She dreams of one day being the centerfold playmate of the month. However, shortly after her 27th birthday she gets sent packing. 27, it is explained to her, is “...59 in bunny years.”

Down on her luck, Shelley comes across sorority row and soon finds herself the house mother for a group of misfits girls that will lose their charter if they cannot get more pledges. Across the street is the stereotypical rich, snobby sorority house that wants to get rid of them. With Shelley’s social skills, and street walker wardrobe, she decides to help the girls attract pledges and even more importantly, boys. When she teaches them how to apply makeup she explains that, “The eyes are the nipples of the face.”

Faris takes dumb blonde to a whole new level. She makes Elle Woods and Sugar Kane look like genius’s. She keeps hoping “vapid” is a compliment as she constantly gets called that. When asked who she will vote for, she responds, “I definitely won’t listen to what Simon says, he’s just so mean.” She bothers the sorority girls when she walks around naked. She explains that it is natural, because she is as God and her plastic surgeon made her.

Faris does not get all the laughs. The head sorority girl is such a nerd that her suggestion for a social event is to have a ferret dress up party. When she is trying to ask a boy over, while her mouth is full of food, she asks if he wants to come over to watch Battle Star Galactica. The funniest line in the whole movie is when the lumber jack chick tries to talk to some guys at a bar by asking them, “Do you guys know where the crapper is? I have to drop some timber.”

Not all of the jokes work. A guy makes fun of one of the misfits girls who wears a back brace, by saying, “Oil can, oil can.” Is a seventy year old movie reference really the best joke the writer could come up with? Faris also pays homage to Marilyn Monroe by imitating her famous scene from The Seven Year Itch. (1955)

The House Bunny is as predictable as any movie there is. You are never surprised by anything that unfolds. However, the charm of a beautiful, dumb woman, with good intentions is contagious. She provides something nice to look at, while your laughing. It is a great combination.

Anna Faris is the reason this movie is as funny as it is.

Anna Faris is definitely the reason this movie rises above being a hum-drum, slightly silly, and rather light comedy. She brings a charisma to the character of Shelley that brings this movie to life in a way another actress might not have been able to. Probably my favorite part of the movie and the bit that made laugh the hardest is the voice Shelley uses to remember people's names.

To be fair though, as Eric said, the girls in the sorority also get some good lines. Emma Stone has some funny parts as Natalie. I love her enthusiasm when it comes to ideas about what they should do on their night out, like her desire to throw shoes over phone lines.

If the writers had been braver they might have thrown in some jokes about Playboy, which, let's face it, is a pretty creaky and obscure institution in this age of internet pornography, as is Hugh Hefner, its founder. Obviously though, since they had the participation of Hefner they had to keep any jokes at his expense out of the movie.

The dumb blond has been around probably since the dawn of movies and this is a worthy entry in the genre. It rather reminded me of a female version of Revenge of the Nerds.