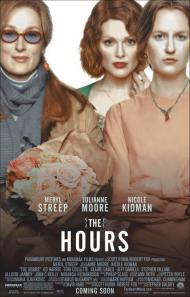 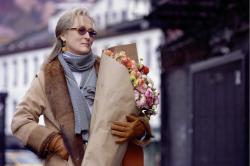 Meryl Streep in The Hours.

The Hours features three very talented actresses in a very simple story told in a very ambitious way.  Unquestionably, the three actresses each play their part extremely well.  This movie is overflowing with talent.  Each performance is Award worthy, but perfect performances do not necessarily make perfect movies, as is the case with The Hours.

It tells the story of one day in the life of three women all living in different times and places.  Nicole Kidman is author Virginia Woolf living in London in 1921.  Julianne Moore is a housewife in 1951 California.  Meryl Streep is a book publisher in New York City, 2001.

On the day in 1921, Virginia Woolf begins writing her novel "Mrs. Dalloway".  In 1951, Laura Brown begins reading it.  And in 2001, Clarissa Vaughn is living the plot of the book, sharing the same first name with the titular character of the book, and even nicknamed Mrs. Dalloway by an ex-lover.

It is a day of change for all three women and they share certain themes with each other.  Themes such as suicide, lesbianism, dealing with guests and family.  It is not a terribly happy day for any of them, yet they all react differently towards their unhappiness.

Virginia Woolf (Kidman), whose sanity was only ever so-so, has her work to retreat into, Clarissa (Streep)  pretends that it is all alright and believes that if she just keeps up a brave face it won't be so bad, while Laura Brown (Moore), the saddest of the characters, has no outlet for her unhappiness and must bury it deep within herself.

All brilliant character studies and as a novel I'm sure it worked, as evidenced by the fact the novel this movie is based on, won the Pulitzer Prize.  A movie is not a book however, and on-screen there has to be a balance between what's going on inside the characters and what's going on outside of them.  And frankly there's just not enough happening here.  Artistic yes, but almost painfully so, as if the director were saying, 'Look at this, it's an artistic movie!'.

Without a doubt three of the best female performances of the year, helped by the fact that pretty much all this movie is, is three different character studies, The Hours does make you think, but it doesn't entertain.  Some people would say that's not the point of Art, but to that I say, 'Great art makes you think and entertains you'.  The Hours does the one brilliantly, the other not so well. 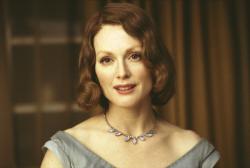 Julianne Moore in The Hours.

The Hours DVD should come with a label attached to it - Warning: This Movie May Cause Severe Clinical Depression. These people are seriously unhappy. Yes it features some of the finest acting (at least technically) in movies today, but it is also dull, drab, dreary, bleak and morbid. Nearly every scene deals with suicide in one form or another.

The best thing about the movie is the creative manner the director uses to connect the three main characters. Virginia Woolf writes the first line of her novel 'Mrs. Dalloway', cut to Laura Brown reading the line from the book and then to Clarissa speaking the line. This is an intriguing and original way to start the storyline and introduce these three women at the same time. There are not enough of these moments however.

As a pop culture entity this movie reflects the interesting politics of The Academy, at least as far as Oscar nominations are concerned. Julianne Moore is billed over Nicole Kidman, has more screen time, and has arguably the more pivotal role - she is, after all, the one who links the other two together – and yet she gets nominated in the supporting category while Kidman not only garners the Best Actress nomination, but takes home the prize on the big night. She was the winner, but only by a nose. Don't get me wrong; I think both she and Meryl Streep are brilliant actresses as far as body movement and having a command of voice and language are concerned. I just don't connect to their souls. Julianne Moore is the exact opposite. She is primal like Elizabeth Taylor; she has more heart.

The supporting cast is nearly as impressive as the three stars; Ed Harris, Toni Collette, Claire Danes, Jeff Daniels and John C. Reilly are all on the roster. Although Ed Harris is the only one allowed to really shine. His death scene is gut wrenching. There are moments like this of intense melancholy throughout the film. And given the subject matter the funeral pace of it makes sense. But at the same time this makes The Hours, while undeniably an artistic achievement, seem more like days. 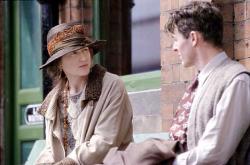 Nicole Kidman and Stephen Dillane in The Hours

This aptly named film is about three horrendously sad characters.   One is a miserable wife, another is a lesbian, but not a hot one.  The last is played by the gorgeous Nicole Kidman, made to look unattractive.   All of them are depressed.  The man with the most screen time is dieing of AIDS.  This drama about death, is nearly two hours long and is actually named The Hours of all things.   Short of including a Rosie O'Donnell nude scene, I cannot imagine a less appealing sounding film.

Do any of these lines interest you in the least?  "I'm dying in this town."  "You cannot find peace by avoiding life, Leonard."  "That is what we do. That is what people do. They stay alive for each other." "I don't know what's happening to me. I seemed to be unraveling."  "Someone has to die in order that the rest of us should value life more. It's contrast. " Zzzzzzzzzzzzzzzz

There is nothing in this film to even mildly amuse me.   I felt nothing for these clinically dull women.  Okay, so the acting is outstanding.   Each actress gets to emote, cry and slog through their character's knee deep pile of self pity.  Booo fucking hoooo!  My favorite moment, besides Woolf's suicide, was when the two teenage boys laughed at her.

Woolf's husband provides her with a beautiful country home and agrees to move if that will make her happy.  She in turn gives him only grief.  Laura's husband provides and cares for her, but she fakes it for as long as she can, before abandoning him and their children.   Only Clarissa and Sally seem at all happy together.  Who in the hell was this film's intended audience, pseudo intellectual middle aged lesbians?

Scott wrote that, "Great art makes you think and entertains you."   I believe great  art makes you feel something.   However, the only thing I felt watching The Hours was that I was wasting my time.