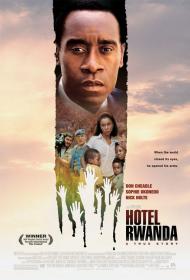 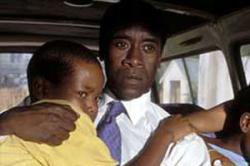 Hotel Rwanda is everything Schindler's List wanted to be but failed to become. It's the story of an ordinary man thrown into extraordinary circumstances and more than facing up to the challenge. If the definition of a hero is someone who was in the wrong place at the right time than the real Paul Rusesabagina, upon whom this movie is based, is a hero of the highest order.

Don Cheadle, in the lead role, gives the performance of his career as a hotel manager in Rwanda in the early nineties. The country is divided into two groups, the ruling class Hutus, of which Paul is a part, and the rebel Tutsis. On the eve of a United Nations brokered peace agreement, the rebels assassinate the Rwandan president and all hell breaks loose.

Paul's 4 star hotel is the headquarters of the UN taskforce as well as the base for the international media who are covering the situation. By catering to local dignitaries' every whim over the years, Paul is confident that he has enough clout to rescue his own family if things get too bad. He is also confident that the International Community will intervene if the situation worsens. Gathering his family and several of his neighbors, mostly Tutsis, Paul takes refuge in the hotel, which quickly - thanks to the UN's presence – becomes a refuge for Tutsis seeking a haven from the Hutus who are now bent on genocide.

When a large United Nation's Intervention group does arrive, everyone in the hotel sighs with a relief that quickly turns to disappointment when they learn that the UN is only there to remove all foreign dignitaries from the country (i.e. all the white people) and not the locals. All the UN leaves to help guard the hotel are two soldiers with orders to never fire their guns. Paul must now use all of his years of building connections to try to keep himself, his family, and the now 1,200 refugees cloistered in the hotel, alive.

I have only vague recollections of these events myself, which proves I think, how sheltered we as Americans are from news of other countries, particularly third world ones. “How can the world not intervene once they have seen your footage?" Paul asks a cameraman (Phoenix) who has just, at the risk of his own life, filmed some of the atrocities taking place all over the countryside surrounding the hotel. “I think most people," the cameraman replies, “will look at that on the news and say, 'that's horrible', and then go back to eating their dinners."

Without a doubt, the best thing going for this movie is Don Cheadle's performance. His sensitive portrayal of a man trying to save his own family, but who ends up saving over 1,000 people simply because there's no one else to do it, is inspiring and definitely Oscar worthy. 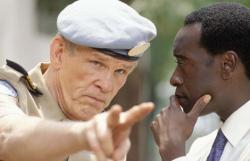 Hotel Rwanda is proof that with mediocre direction and a somewhat flat script a movie can still be great, provided it has an absolutely riveting plot and Oscar caliber performances.

The story, as Scott said, is truly amazing and inspiring. Ditto Don Cheadle's acting. He brilliantly shows the guts and fortitude of this man without ever making him seem extraordinary. He simply does what he has to in order to keep himself and his family (and an ever growing number of strangers) alive.

All of the U.N. workers are shown as completely one dimensional, with the exception of Nick Nolte's character, who delivers one of the most melodramatic speeches of the year. Still, the details of this true story are so compelling and awe inspiring, and the central performance so sublime, that any and all flaws in the script seem nonexistent. If you are not emotionally affected by Hotel Rwanda (and specifically Don Cheadle's performance) then you are an evil person who should never go near a theater again. 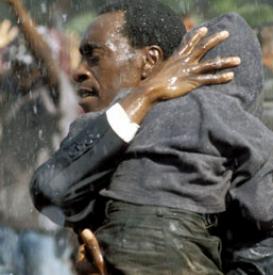 Hotel Rwanda is the greatest socially significant movie I have seen in a long time. It missteps with Nolte's "nigger" speech. The foreign nationals are being sent away because they are from different countries, not because they are white, as Nolte's character suggests. However, it does illustrate, almost as well as Team America, just how impotent the United Nations truly is.

The cast does an amazing job and the writing is great. Cheadle does a notable performance as the hotel manager who continues to wear his suit and tie until the horrific scene on the road. What follows is his character's utter melt down. He symbolically stops wearing his suit after that.

As Patrick wrote, the direction is the weakest part of the movie. Too often a dramatic scene is left unmilked. The scenes where Cheadle breaks down or sends his family away are not maximized for their full emotional potential. The director should have shown Cheadle's face more during his break down scene. He should have lingered more on Cheadle and his wife when she departs on the truck. The film still carries plenty of emotional weight, but it is due more to the circumstances than anything the director does.