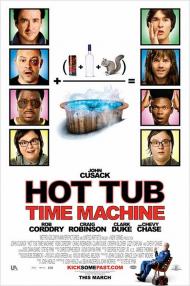 If you're going to name your movie Hot Tub Time Machine you're setting up an expectation for a very high degree of silliness and comedy. A degree that this movie only achieves occasionally and never for a sustained period of time. It's still funny and oftentimes fun, but never consistently and seems to hold itself back from being as silly as it should be.

Three old friends leading miserable middle-aged lives, and the nephew of one of them, decide to take a vacation to a mountain resort where they'd shared some good times 25 years ago. Once there, they discover that the old place isn't what it used to be, but after an accident with their Hot Tub and a Russian energy drink, they wake up inside the bodies of the younger selves in 1986. Cautioned by a mysterious Hot Tub repairman played by Chevy Chase to not change anything, the group sets out to relive some moments from their past.

A story like that could go either one of two ways. It could be an all out comedy of silliness or it could try to make a statement about aging and dealing with decisions that we've made. While this movie never says anything profound, it also never goes silly enough.

The cast is lead by a frankly bored looking John Cusack. He plays a sad sack insurance salesmen recovering from a breakup. It's his nephew who accompanies the group to the past. Cusack plays the straight man to the much wackier supporting cast.

While even people born later than 1989 might enjoy this movie, those of us who remember the 1980s will get more out of it. Buried in the film there are a few 1980s Easter Eggs. William Zabka, whom you might remember as the blonde kid who gets his ass kicked by Ralph Macchio in The Karate Kid, has a cameo appearance. There's a moment recreated from John Hughes Sixteen Candles. And several references are made to the movie Red Dawn.

They should have really run with that 1980s theme. The entire cast should have been played by stars from the 1980s. People like Mathew Broderick, Molly Ringwald and Anthony Michael Hall as stars would have amped up the nostalgia level.

Clark Duke as Jacob, Cusack's nephew in the film, gets some of the movies' funniest lines. "This is scientifically possible." He exclaims at one point. "I write Stargate Fanfiction so I oughta know!" However, it's another 1980s throwback Crispin Glover who steals every scene he's in. First by playing a surly one-armed bellboy in the present and then as the same more lighthearted two-armed bellboy in the past with a running joke where he almost loses his arm numerous times. Glover seems to be one of the few actors in the movie who's playing his part with the level of mockery that it requires.

As someone who remembers the 1980s with some fondness despite the horrible fashion and hair of the times, I was looking forward to this movie for some good old nostalgic fun. And while I wasn't bored and I did laugh occasionally, it wasn't all I had hoped it would be.

Three depressed, drunk, naked middle aged guys. How much better can a movie get?

I was looking forward to Hot Tub Time Machine for the nostalgia factor as well. The only time it generated any real sentimentality though, was in recognition of the songs on the soundtrack. There are some fashion and hair jokes, but like Scott, I felt they never went far enough. Were drugs really so much more prevalent then?

Hot Tub Time Machine's humor is more crude than clever. It has far too many jokes involving male genitalia. The scene where one yells obscenities over the phone to a nine year old girl was just wrong. Being able to determine the decade by Michael Jackson's complexion is funny but already old due to the commercial.

The film's weak area is definitely the cast. None are able to generate any amount of sympathy for their dull characters. They seem to just walk through their roles. Robinson and Cusack are lifeless. Although Scott liked Duke, I fail to see his charm. Ever since Seth Rogen, Jack Black and Jonah Hill, fat guys are supposedly innately funny? Corrdry works the hardest to keep the energy going, but his suicidal drunk is more annoying than entertaining. No wonder the other characters no longer hang out with him.

Since my son recently told me that I see politics in everything, I have to point a couple of things. When Adam is bad mouthing the 80's he says all it had was, "...Aids and Ronald Reagan." How nice to put a great President in the same category as a horrible disease. The big jerk in the movie, Blaine, is a self described patriot. In Hollywood terms, a patriot is synonymous with ignorance.

For a movie that really does not make any sense, I feel this last point is almost moot. Jacob had to go back to the future as he did not exist in that time, but why did th other guys go? They go back to discover changes they made in their life, that they do not know that they made. If they just stayed back and made those changes then.... Oh what the hell! This movie is hardly worth thinking that hard about. 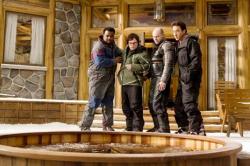 Adam, Lou and Nick are rip-offs of Phil, Alan and Stu from The Hangover; only none of them are as funny. I especially agree that John Cusack seems completely bored by the proceedings and he has aged noticeably since the last time I saw him in a movie.

There are a few minor laughs to be had but I was honestly glad when this pretty awful movie was over. And from now on I will take away half a star from any movie that features a scene with someone projectile vomiting. A gag that was never funny in the first place and now seems ubiquitous in comedies.

Chevy Chase looks tired and befuddled in his few scenes as the enigmatic hot tub repairman. I guess his presence serves to remind us just how much time has passed since the 80s. Unfortunately what’s left of his talent is completely wasted.

I chuckled when Blaine accuses the guys of being like… “21 Jump street communist spy battalion type dudes.” Even though that show didn’t debut until 1987, the year after this movie is set. In fact this movie is full of anachronisms.  Many of the songs heard in the background hadn’t been released yet in 1986, including "I Just Died In Your Arms tonight" by the Cutting Crew and Salt-n-Pepa’s “Push It”.

Also Adam’s nephew Jacob is supposed to be 20 years old in 2010 but he is shown being conceived in 1986. But I guess it is stupid of me to expect any sort of detailed attention to reality in such a dumb movie.

Hot Tub Time Machine works best when comparing 1986 to the present day. Jacob and a girl have the following humorous exchange. Jacob: “I'm kinda right in the middle of a thing right now, but can I text you later?” Girl at Club: “Can you what?” Jacob: “Are you online at all?” Girl at Club: “I have no idea what you're talking about.” Jacob: “How do I get a hold of you?” Girl at Club: “You come find me.” Jacob: “That sounds... exhausting.”

Like my brothers I was hoping for more good old-fashioned 1980s nostalgia. I agree with Eric that the soundtrack evokes that decade the best. In fact the scene I most enjoyed was when New Order’s “Bizarre Love Triangle’ was played in the background. I couldn’t count the number of times I danced to that classic back in the day. That bouncing electronic beat and those strange melancholy lyrics still send a chill down my spine...