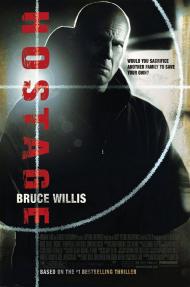 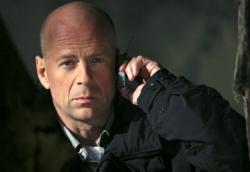 The makers of Hostage are clearly of the school of thought that believes that no matter what's happening on the screen, it can be improved by making the music swell dramatically and by showing at least a part of it in slow motion. These are both devices that should be used infrequently and judiciously, but here they are thrown about so often, that it's a wonder the entire film isn't done in slow motion with giant dramatic chords playing constantly.

Bruce Willis stars as Jeff Talley, a former Los Angles hostage negotiator who's taken a job as the police chief of small Californian town. He retired from negotiating after failing in his last hostage situation as depicted in the opening scene. Of course in one of those coincidences that only happen in the movies, a hostage situation erupts and he's forced back into action.

Amid the melodrama and shaky plot points lies a lot of fat that could have been trimmed from this movie. Every scene with Chief Talley's family should have been the first to go. It's supposed to add drama to the action, but it's so weak and Talley is such a stiff, cardboard character that it only slows down the film. He could have just said he loves his family and we'd have believed him. We don't need to know that his daughter hates staying in this small town and that he's having marital problems.

The movie is completely devoid of humor as well. Everything said and done is soooo serious. One moment of irony that passes without even the slightest wink to the audience, occurs when Talley is talking to one of the hostages on a cell phone. It's a young boy and he's managed to crawl into the air vents inside the house. Maybe he learned to do this from watching Die Hard, but not the slightest reference is made to it.

There are also a few scenes with bizarre imagery. At one point a fire is set in the house where the hostages are being held. One of the villains comes walking down a hallway with his arms outstretched, Christ-like, as the flames flicker behind him in slow motion. The teenage daughter being held hostage, is watching him, only she's put a wet towel around her head to protect herself from the flames and appears as if she's trying to do a Virgin Mary impression. I'm only assuming this was intentional of the director, but if not, it's an unfortunate coincidence.

To his credit, Willis is the only enjoyable aspect of the movie. He's in his serious, hard-case mode here, but he still retains his likeability and the audience's sympathy. There are also one or two scenes where he's required to display real emotion, which he does quite well, but then the swelling music and the slow motion come in and kill the moment.

With a better director, a tighter script and just a few jokes to break the tension, this movie could have been so much better. It still might not have been perfect, but it would've been better than this.