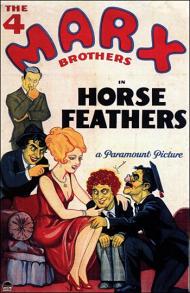 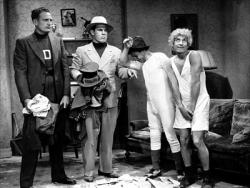 The Marx Brothers take on higher education in their fourth movie, Horse Feathers. Groucho plays Professor Wagstaff the new dean of Huxley College where his son (Zeppo) is enrolled and fooling around with the college widow (Todd). Groucho disapproves. He compares his son’s actions to his own at that age. As he puts it, “A college widow stood for something in those days. In fact she stood for plenty.” Zeppo has a slightly larger part this time around. He had expressed a desire to retire from the group and his brothers wanted him to stick around. As it turned out he would appear in just one more Marx Brothers movie, Duck Soup the following year.

Like she did in Monkey Business, Thelma Todd handles the Margaret Dumont chore of playing the gravitational straight person to the revolving lunacy of the brothers. All of whom try wooing her at one point or another in the movie. Her part is larger here but she was funnier in Monkey Business. She does do a great job of setting Groucho up for a laugh. At one point she exclaims, “Oh, Professor, you’re full of whimsy.” “Can you notice it from there? I’m always that way after I eat radishes.”

The silly plot involves the events leading up to the big football game between Huxley and its rival Darwin. Darwin plans to cheat by hiring two well-known local athletes to play in the game and also by trying to obtain Huxley’s game signals. Groucho counters by mistakenly hiring bootlegging misfits Chico and Harpo to play for Huxley. They later come up with a desperate scheme to kidnap the semi-pro players. Like all Marx Brothers movies the plot is not important, it is merely a tree for them to hang their laugh ornaments from.

The movie opens with Groucho performing a song called “I’m Against It” explaining his feelings about education. He does a very silly little dance step where he kicks each leg out sideways and rotates it at the knee. Later each of the brothers performs a song called “Everyone Says, I Love You” for Todd. Each version has different lyrics sung to the same melody. Chico accompanies himself on the piano while singing, Zeppo just sings it and Groucho (perhaps to show he was also a talented musician like his brothers) plays a guitar and sings it in a rowboat, while Todd does the rowing of course. Harpo whistles the tune and plays his harp.

Although this is one of their shorter pictures, clocking in at just an hour and six minutes, it squeezes in quite a few of these musical moments. In fact Groucho seems to take notice of this as he makes a disparaging comment directly to the audience before Chico begins to play the piano at one point. He says, “I’ve got to stay here but there’s no reason why you folks shouldn’t go out into the lobby until this thing blows over.” Scott, I know you’ll appreciate that line.

For once Groucho doesn’t completely dominate the movie. This one belongs to Harpo. He has many surreal bits of comedy. When a bum asks him for change to buy a cup of coffee, Harpo produces a steaming cup from under his coat. When he walks past two men playing cards in a speakeasy and one of them puts the deck on the table and says “cut” Harpo does, with an ax. To get into the speakeasy you must say the password Swordfish. Harpo pulls out a fish with a sword sticking out of its mouth. And he gets to be the hero during the famous and hilarious climactic football game where all four brothers wind up on the field. The brilliant insanity of this sequence is better seen than described.

One of the funniest scenes happens when the boys take over a classroom and Groucho begins teaching an anatomy lesson. “Now then baboons. What is a corpuscle?” Chico: “That’s easy. First there’s a captain, then there’s a lieutenant, then there’s a corpuscle.” This scene ends with Chico and Harpo attacking Groucho at his desk, first with pea shooters and then by throwing books. One of these clearly strikes Groucho in the face. He falls back on the desk and says “You got me.”

Horse Feathers tickles but it isn’t the funniest Marx Brothers' movie by more than a nose. 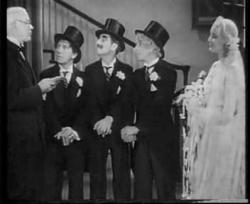 As someone who has always found Chico and Harpo's musical interludes to be the Marx Brothers' films' weakest points, I did appreciate the comment by Groucho that Patrick mentioned. This time though, the entire movie is so short and so briskly paced that the ones included here can't slow things down. I have always enjoyed the comical songs in their films and I certainly enjoyed the ones here, especially Groucho's "I'm Against It.' The song "Everyone Says I Love You", sung by all of the brothers, as Patrick mentioned, was the inspiration for the title of Woody Allen's 1996 musical.

While I agree that the comedy is more evenly spread among the brothers, with even Zeppo getting a bigger part (but not many more laughs) than usual, for my money it is still Groucho who is the funniest, as he always was. His exchanges with Chico are priceless and he delivered one-liners better than anyone ever has, before or since. Patrick mentioned a few and here are some of my favorites,
"You know you've got the brain of a four-year old child, and I bet he was glad to get rid of it."
"I was gonna get a flat bottom but the girl at the boat house didn't have one."
"I married your mother because I wanted children. Imagine my disappointment when you arrived."
And in one of the scenes that made me laugh hardest, Groucho responds to Thelma Todds' attempts at baby talk, "If icky girl keep on talking that way, big stwong man's gonna kick all of her teef wight down her fwoat."

Although the brothers are hilarious as always, some of the credit to the film's success has to go to the screenwriters, especially S. J. Perelman, who reportedly fed the brothers a steady stream of one-liners. He also worked on Monkey Business, but while creatively they were a good combination, there was friction between the writer and the brothers. In an interview years later, Perelman would say, "I did two films with them, which in its way is perhaps my greatest distinction in life, because anybody who ever worked on any picture for the Marx Brothers said he would rather be chained to a galley oar and lashed at ten-minute intervals than ever work for these sons-of-bitches again."

Part of the reason for the film's brevity is that the original ending, which involved a victory bonfire burning out of control across the campus, couldn't be filmed because the studio deemed it too expensive. This actually works to the film's benefit. Marx Brothers' films were never strong on plot and an hour and change was the perfect running time for their particular brand of humor. And with that original ending we might have lost the iconic image of the three brothers in tuxedos lined up to marry Thelma Todd.

Perhaps this isn't quite the brothers' absolute best film, but there's plenty to enjoy and even more to laugh at here. 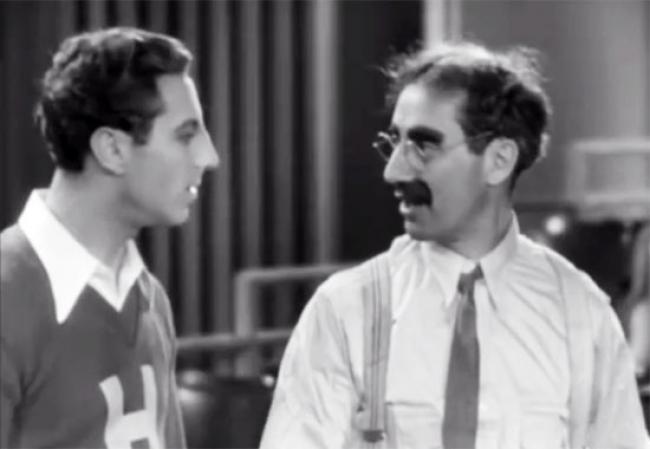 As great of a foil Margaret Dumont was for the brothers, Thelma Todd was younger, thinner and more attractive, providing some sex appeal to the Marx Brothers routines. Dumont was merely there to be the straight (wo)man, act shocked, and all the while taking plenty of hilarious abuse. Both ladies brought something to the table and there was certainly room for both women in these films.

As my brothers wrote, it is once again the one liners that make Horse Feathers so funny. My brothers mentioned some and I will add my favorite. After Harpo hangs a poster of a sexy girl in the front of the class Groucho is “teaching” Groucho asks Chico, “Is this your picture?” with perfect timing, Chico responds, “I don’t think so. It doesn’t look like me.” It is those types of responses that make me laugh. However, many sight gags are too obvious or stupid to garner any humor. At one point Harpo has a banana whose peel comes off with a zipper. He takes a bite and then zips it back up. When Groucho signs a document but then points out that it is not official because there is no seal on it, what do you think Harpo will bring back when he runs off camera?

Although it was likely not meant to be anything but funny, I found the scene where Harpo burns the Deans books to be a tad unsettling. He smiles gleefully as he does it but there is never any reason given for it. The year after this film was released; Adolph Hitler came to power and the first organized Nazi book burning took place on May 10, 1933 where German university students gathered in Berlin and other German cities to burn piles of books that they believed contained "unGerman" ideas. The fact that the Marx brothers were Jewish adds another political layer to the scene. In real life, when Groucho was once told that a swimming pool was off-limits to Jews, he stated, “My son is half-Jewish; can he wade in up to his knees?”

It was those kinds of off the cuff sounding lines that made Groucho and the Marx Brothers so hilarious. They did not write all of their own lines but it sure sounded like they did. When Groucho walked in on a Professor lecturing his class on anatomy, Groucho asks him in his very distinct voice, “Is this stuff on the level or are you just making it up as you go along?” The Marx Brothers were so good at what they did that they sure made it seem as if they were making it up as they went. 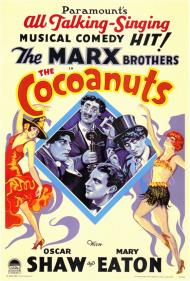 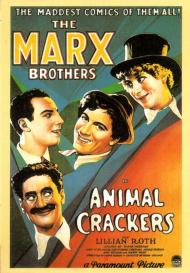 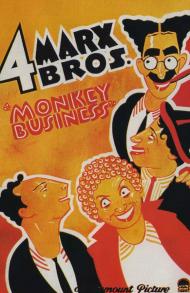 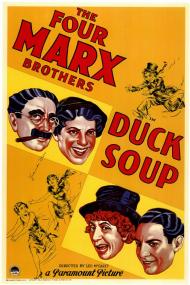 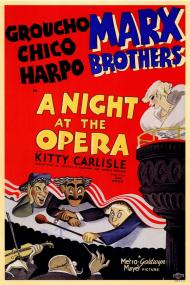