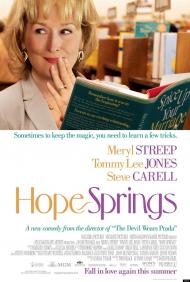 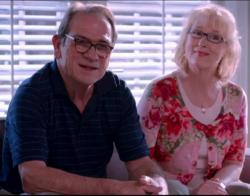 Not since Katharine Hepburn and Henry Fonda spent that last summer together On Golden Pond has a movie so perfectly captured the experiences of a longtime married couple entering their twilight years. Meryl Streep and Tommy Lee Jones play empty nesters Kay and Arnold Soames. As the movie begins they've long since grown apart, having slept in separate bedrooms for years. They live their lives going through the same mundane routine everyday.

One fateful day the desperately lonely Kay decides she's had enough. She pays for a week long intensive couples therapy session in a small seaside town in Maine. She tells the unwilling Arnold that she is going with or without him but that she hopes to see him on the plane the next morning...

Hope Springs is that rarity in summer movies. It's a naturalistic, low-key look at love and the difficulties of keeping a marriage alive after 60. It is sad at times and in the few scenes that do go for obvious laughs the humor is of the gentle variety. There are no vulgar body function jokes, nobody gets peed on or covered in projectile vomit. There are no car chases or explosions. Finally, a summer movie for adults.

Although there are a few famous faces that pop up in cameo roles (Mimi Rogers and Elisabeth Shue get a scene apiece) this is really a three person movie. A very restrained Steve Carell plays it straight as Dr. Bernie Feld. The script has him talking like an actual therapist rather than a movie caricature of one. Through a series of sessions he works with the Soames to salvage what's left of their crumbling marriage by helping them reconnect physically.

Their attempts to rekindle the long dormant passion they once shared provides the most laughs. Although, as I said, the humor is definitely on the gentle, more subtle side. There aren't really any gut busting laugh-out-loud moments, but there are certainly moments that will bring a smile or induce a chuckle or two.

Whatever your age, Hope Springs is a great date movie. Young couples can imagine themselves growing old together while older couples can compare themselves to the Soames. As played by Streep and Jones they seem like the nice older couple that lives next door. Kay is mousier than most of Streep's characters. Meryl gives an introverted portrayal of a woman longing to be touched by her husband, who has grown increasingly distant. She is soft spoken and passive. Jones is curmudgeonly as Arnold. He's stuck in his ways and seems to take his wife's presence for granted.

The intelligent script shows us the current state of their marriage and then, during therapy, we learn how their relationship reached such a sorry condition in the first place. Watching the two of them squirm in embarrassment when Dr. Bernie forces them to frankly discuss their sex lives and most intimate fantasies is great entertainment. These three old pros expertly toss the ball around without ever dropping it.

Although it's not as much of a comedy as the trailer (and tagline) tries to sell it as, Hope Springs is very romantic and it features two of the greatest stars of their generation in their first movie together (just like Hepburn and Fonda more than 30 years ago). Hope Springs and it also tugs at the heartstrings. 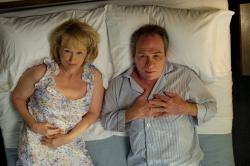 Hope Springs has an old married couple at the center of its story and that couple is played by two very good actors. That's all it has in common with On Golden Pond. Any sentence I used to compare this movie to that classic would have to include the phrase, “unlike On Golden Pond.” Both movies feature good acting, but On Golden Pond also had a great script, something this movie lacks.

As Patrick wrote, this movie isn't the comedy that the trailer and marketing made it out to be. In fact, despite some humor, I wouldn't call this movie a comedy at all, despite Streep's Golden Globe nomination in the comedy category. There are some humorous moments, but it's a much more serious look at a troubled marriage than a comic one. The jokes are gentle as Patrick said. In fact, they're so gentle that they don't so much tickle your funny bone as they do lightly blow on it.

This seems to be the year for awkward sex scenes featuring older characters. I thought seeing Bill Murray as FDR get a hand job in a car was uncomfortable enough, until I saw Meryl Streep giving Tommy Lee Jones a blowjob in a movie theater. I think it's great that older couples keep their sex lives going into their old age, but I don't want to see or hear about the details. Watching and listening to them discuss and act out sex acts felt like having a conversation about sex with your grandparents. Patrick mentioned that the humor doesn't involve projectile vomiting, but I think I'd rather have seen that than Streep and Jones getting intimate.

The characters of Kay and Arnold seem fairly stereotypical for most of the film. Their main problem as a couple is that they both suppress all of their emotions and stopped communicating years ago. They manage only one moment that seems truly genuine and revealing when they have a breakthrough during a therapy session and finally discuss the reasons their sex life has died.

I do agree wholeheartedly with Patrick that Streep and Jones deliver great performances. What good there is about this movie is all down to them. If only the script lived up to their performances. 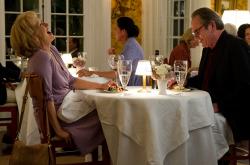 The message of Hope Springs actually has nothing to do with the couple in questions age. They both take each other for granted yet want intimacy with each other, but have gotten to a point where they are both complacent to the lack of it. What they both lost track of was that loving someone without expressing it, is nearly meaningless. These two need sex/intimacy in their life so as to let the other know they still care.

In fact, it is not even about the act of sex so much as it is the need to feel that the other still wants them. Note how Kay says that Arnold use to close his eyes when they had sex. What ever the reason he did it, she took offense to it, thinking it meant he no longer found her attractive. She just wanted to feel that he still loved her while he felt she stopped loving him when they stopped having sex. He loved that she made an effort in the movie theater while it bothered her terribly that she could not commit to it. Neither one is actually begging for sex so much as the passion and love that it expresses.

Streep and Jones do a convincing job as a couple long familiar with each other. I always enjoy Streep in casual moments. In one scene she is packing to leave as Arnold does not want to continue the therapy sessions. She is upset as she packs and talks indifferently to him about his reasons, then cuts in with, "Don't forget your razor." It is such a natural little moment that seems so very sincere. Some actresses need to go big, while she is better than any actress in history at underplaying.

Jones is best in the therapy session scenes. Arnold is there because he knows there is a problem and wants to resolve them, but is not at all comfortable about discussing private issues. You can see on his face how he is struggling very hard to deal with a situation that is completely outside of Arnold's comfort zone.

Hope Springs is a nice little film that really just says that love means having to show you mean it.