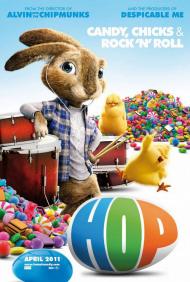 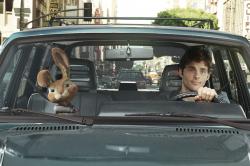 There really has never been an Easter movie, at least not in the sense that there are Christmas movies.  Sure, Judy Garland and Fred Astaire did Easter Parade, but it is more of a romantic comedy than a holiday film.  Passion of the Christ is a far too literal a film to be considered a "Holiday" film.

Hop tells the story of the Easter Bunny's son E. B.  He is to inherit the job of delivering the baskets annually to kids around the world.  Except for China, they haven't cracked them yet.    For some reason, E.B. would rather be a drummer.  He leaves their home, on Easter Island or course, and goes to Hollywood to follow his dream.

Meanwhile, Fred O'Hare, played by middle aged James Marsden, gets an intervention from his family.  They are tired of him being unemployed, doing nothing and still living at their Los Angeles home.  His sister sets him up with an interview at a video game company and lets him house sit in her bosses mansion.   On the drive to the mansion he runs over E. B. who ends up moving in with Fred.

While the slacker human and the Pascha Lepus are making like the Odd Couple, a coup d'état is going down on Easter Island, led by a bitter fat fluffy chick, named Carlos.   He is thrilled E.B. has run off.   Carlos wants to steal the egg of destiny so as to take charge.  The dastardly chick wants to replace all the candy in Easter baskets with worms.  Will E.B. get back to Easter Island in time to save Easter?  Will Fred ever get a job?

Hop is a visual treat of pastel colors and a great combination of live action and animation.  The scenes of the Easter Bunny's candy factory is an ocular exercise.  Chocolate rabbits, Hershey kisses and marshmallow peeps are every where.  Then there is the huge jelly bean fountain with numerous colored jelly beans cascading down several tiers.  One of the funnies moments that earned the greatest laughs from the children in the audience is when E.B. poops jelly beans.

As cute and sweet as Hop is, the plot and motives of the lead are very weak.  E.B. wants to run away to be a drummer instead of deliver baskets once a year.  Would working one day a year really be bothersome to his drumming career?  The biggest glaring flaw in the film is that half the time Fred is desperately trying to keep a talking rabbit hidden and the other half he isn't.  He pretends E.B. is a stuffed animal or puppet, to keep him a secret.  Then they talk on the street or have lunch in a cafe for all to see.  The waitress even takes E.B.'s order without batting an eye.

Hop will entertain the kiddies and play into the entire joy of Easter egg hunts and baskets full of candy.  It has a few adult jokes, such as when E.B. tries to get into the Playboy mansion because he heard bunnies live there.  No mention is ever made of religion or the Crucifixion of Jesus.  Hop is light and whimsical.  It is the perfect film for an annual Easter viewing for any household that has children. 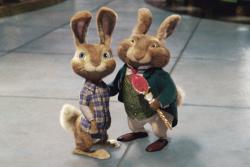 Russell Brand and Hugh Laurie provide the voices of E.B. and his Dad in Hop.

I have to admit that I expected to hate this movie. It looked pretty bad and Eric, your review didn't exactly make me want to rush right out and watch it. I can't say I ended up loving it. It's aimed too much at young children for that. However, I did enjoy it more than I thought I would.

Even though Santa Claus isn't exactly realistic, he  has a certain logic and clearly laid out mythology that the Easter Bunny lacks. The writer's of this film borrow liberally from the Santa mythos for the Easter Bunny and his setup. You could easily transplant this story to the North Pole with very little rewriting required. You just substitute elves in place of the chicks and set the story in December and you've got a Christmas story.

The other reason Christmas movies are easier is that any actor can put on a fake beard and a fat suit to play Santa, but you're forced into using animation if you want to portray the Easter Bunny. This is easier nowadays with CGI and the animators do a good job with it here, both when E.B. is in the human world and when Fred is on Easter Island, which is mostly animated.

I found the way E.B. walked around Hollywood talking to Fred without people batting an eye to be odd also. Eric, you mentioned the restaurant scene where E.B. orders a meal and the waitress acts very nonchalant at serving a talking bunny. What's even odder about that moment is that in another scene, Fred lectures E.B. about staying out sight because if he's spotted he will be dissected for sure and so it seems an odd choice to then take him out for a meal.

Clearly this isn't a movie that required heavy acting, but I actually give James Marsden credit for so gamely playing second-fiddle to an animated rabbit. I'm sure while filming he was playing off of a ping pong ball on a stick or some other representation to stand in for the animation and he does it all with a straight face and a willingness to look like an idiot.

Russell Brand puts his comic charm to good use as E.B.. Just where he got his Essex accent from is a bit of a mystery though, especially considering his father is voiced by the posh sounding Hugh Laurie. I suppose the never mentioned Mrs. Easter Bunny must have come from there.

There is an absence of classic Easter films and I can't say that this one filled that void, but it's cute enough in its own way and I agree with Eric that for little kids this would make perfect Easter viewing. 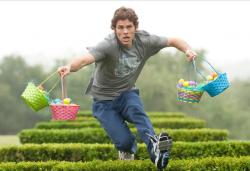 There is certainly the germ of a great holiday movie here. It's just too bad it didn't sprout into something truly memorable. I too enjoyed aspects of the story but found the threadbare plot stretched a bit thin for its 90 minute run time. 20 minutes could easily have been trimmed.

Scott mentioned the similarities with the Santa Clause myth. The problem is they copied it too much. I never before heard that the Easter Bunny drove a giant egg-shaped sleigh pulled by flying chicks. Scott, the chicks actually pull double-duty as both the elves and the flying reindeer of the Santa story. It even ends with Fred O'Hare paraphrasing Santa, “Happy Easter to all and to all a good... mid-to-late morning.”

Like Eric, I found E.B.'s motivation for leaving Easter Island to be pretty flimsy. Also the set-up seemed needlessly convoluted. Why not just have Fred be a rich eccentric living in his own Beverly Hills mansion rather than having him house sit? This storyline never really goes anywhere. I kept waiting for the owner of the house to show up and be a miserly old guy that needs help rediscovering the true meaning of Easter. Either that or be someone famous.

At first I thought Eric was being needlessly snide in calling James Marsden middle-aged, but the fact is he does come across as a bit mature for the part. He looks too old to be playing Elizabeth Perkins' son.

I liked the visuals on Easter Island well enough. They captured certain aspects of my childhood imagination fairly well, but I would have liked to see the concept of Spring tied in a bit more. The secular Easter Holiday is about Nature's awakening from Winter's slumber and this angle should have been played up more.

I agree that Marsden plays well off of the CGI bunny, and Russell Brand is good providing the voice of E.B. If they had tightened the script, given E.B. stronger motivation, and highlighted the seasonal aspect of the holiday more (where was that famous Bunny Trail we've heard tell of?) I would wholeheartedly agree that this should be an annual movie treat. I guess if the kiddies like it enough it will become an Easter tradition but it could certainly have had more appeal for adults.

Oh and be sure to stick around through the end credits to see how that China situation that Eric mentioned works out. Now please excuse me while I go color some eggs.