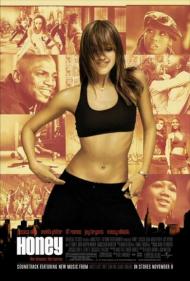 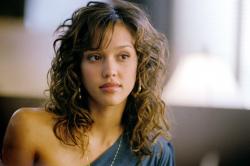 For a while there I was convinced that Gigli had a lock on the Razzie for worst movie of the year, but then, along came Cat in the Hat to compete with it. And now this week, we have Honey, which makes both of those two films look like Oscar contenders. Riddled with clichés, bad acting, laughably overdone melodrama, and filled with stock characters thrown into your standard plot of the girl who just wants to make it big. It's so bad that a new definition of the word bad will have to be invented just to cover the scope of this movie's badness.

Honey Daniels (Jessica Alba), just wants to be a music video dancer (Of course, with a name like Honey Daniels, it was probably that or become a porn star.) Her dreams are realized when a video director sees her dancing in a club one night and offers her a job. About 30 seconds into the video shoot, he promotes her to choreographer. Suddenly all of her dreams are realized, but with her newfound riches, she begins to pay less attention to her friends and the kids from her old neighborhood that used to attend her free hip-hop dance lessons at the community center run by Honey's mother. Before you can cry, "Will no one think of the children?" Honey is forced to choose between her friends and success, cause that's what real friends are for, right? To make you feel guilty about being a success? Along the way, Honey falls in love with barbershop owner Chaz, played by Mekhi Phifer, who's talents are wasted in this throw away role. I won't spoil how the movie ends, but if you can't guess after watching the first five minutes, than this must be the first movie you've ever seen.

Jessica Alba is attractively bland in the lead role, but she does manage to keep a straight face through all the melodrama, which wasn't true for me. I found myself laughing at the moments that were supposed to be touching. The rest of the cast is so locked into their stereotypes that there is no room for talent to emerge. There's the supportive father, the disapproving mother who, at heart, just wants the best for her daughter, there's the shady drug dealer, and of course the best friend. Take plot A and insert characters B, add some real hip-hop artists, like Missy Elliott, 3rd Storee, Ginuwine (and several other people that I've never heard of), and you end up with this sad excuse of a movie.

Honey's problems are entirely the fault of first time feature film director/long time music video director, Bille Woodruff and the inexperienced writing team. They bring nothing new to this movie. Nothing in the plot is original, and some of the devices are straight out of those old Mickey Rooney/Judy Garland "Let's put on a show!" movies. The characters are all stereotyped, and the dialogue is nothing to write home about (or to put in a script for that matter.)

Maybe Ben and Jen should write a letter of thanks to the makers of this movie. In terms of being bad, Honey beats Gigli hands down. 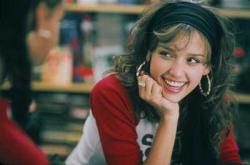 Although Scott is completely right about this movie being really bad at least its heart is in the right place. It tries very hard to be uplifting in that cheer-along-with-the-star-against-adversity kind of way. The enthusiastic performers all give it their best shot but in the end the weaknesses of the script are just too much to overcome.

Bille Woodruff is a competent, if inexperienced movie director. He has a fine eye for setting up shots but lacks the ability to bring cohesion and believability to the cliché filled story, which has been done dozens of times with better results. See Krush Groove or either of the Breakin' movies for superior examples of the genre.

As Scott mentioned Honey's dreams of being a dancer/choreographer are realized almost instantly. Then, as an afterthought it seems, the filmmakers realized their story lacked any real tension. So they have the ignored best friend go off to Atlantic City for her birthday celebration without Honey. (Oh no, she had to go shopping by herself!) Meanwhile Honey is attending a star-studded party with the video director. He's the guy who discovered her dancing in a club and gave her a job and up until this point in the movie seemed like just a really nice guy. But wait, he suddenly becomes a slime-ball who only wants to sleep with Honey. She rejects him of course. This leads to one of the most overly dramatic moments when he snaps, 'How you gonna play me bitch!' At this point he is revealed as the heavy. He also loses whatever real characterization he had (which wasn't much I grant you) and becomes instead a walking representation of 'The Man'.

The section dealing with Lil' Romeo and the pressure he is under from a local drug dealer has about as much actual tension as an old episode of 'The Facts of Life'. And if this movie is any indication of his acting skills then Bow Wow has nothing to worry about.

Good intentions aside, youthful energy and enthusiasm can't make up for incompetent writing and inexperienced directing. 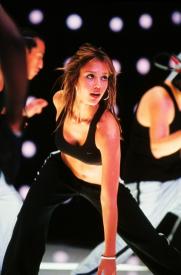 Each of the three movie buffs have a list of films that we need to write the third review for. Clearly they are all ones that do not interest us or we would have long since reviewed them. Honey has been on my list for a very long time, which speaks for itself.

Honey Daniels is a living breathing angel. She is beautiful, sweet and nicer than can be believed. She works at a dilapidated community center teaching underprivileged youths to dance hip hop. She helps children she comes across on the street. She works several jobs. She does not do drugs or even swear. When it comes to sex, Honey explains, “I'm not that kind of girl.”

In fact, everyone is so Disney-like in this dull film that it quickly lost whatever credibility it may have been attempting to have. The only friction comes in the form of a jealous dancer who purposely bumps into Honey at a club and yells, “I don't owe anybody anything, especially not some section eight, no-rhythm-having club ho.”

Honey may know how to dance but she should have paid better attention in English class. At one point Honey says to Lil Romeo, “I like that. Your flavor's hot.” No, she is not talking about his chili recipe; she is referring to his dance moves. Honey makes the plural term “people” extra plural when she explains, “We just peoples.” When she says, “If you don’t wanna kick it?”, She is not asking Lil Romeo to play soccer.

When the dialogue is not dumbing down the English language, it is sappier than a Nicholas Sparks novel. Chaz has this Hallmark card line, “I found something that I truly love, that truly makes me happy. That's a million times better than something that makes you rich.” While Honey has this cliché, “It was everything I always wanted. But when I had got it, it felt like nothing, less than nothing.”

The best I can say about Honey is that it is now off my list of movies to review. Unfortunately, I still have to review Sex and the City 2 (2010). Maybe I will get lucky and death will come first.