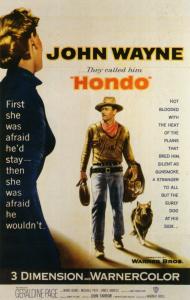 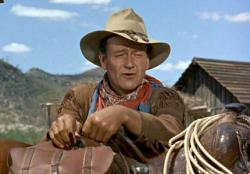 Wayne is Hondo Lane an army dispatch rider who once lived with the Apache's. He discovers a mother and her young son living alone in Apache territory and assumes the role of their protector. A romance quickly blossoms between the cowboy and the mother. Stage actress Geraldine Page made her movie debut opposite Wayne and even garnered an Academy Award nomination in the supporting actress category. Her acting chops definitely add to the realism of this movie.

The story is pretty standard stuff, up to and including the climactic showdown. Hondo finally convinces the mother to leave with him just as a small cavalry contingent rides out to do battle with the warring Apache's. The soldiers are nearly wiped out and soon Hondo, the mother, her son and the remaining soldiers are in a race for their lives with the Apache's in hot pursuit. At the end of the movie one of the soldiers makes the statement that a larger army will come back to slaughter the Indians, to which Hondo replies, 'That's a shame since the Apache way of life will be forgotten. And it's a good way.'

If you are in the mood for a fast-paced classic Hollywood western then look no farther. Ward Bond and James Arness costar. 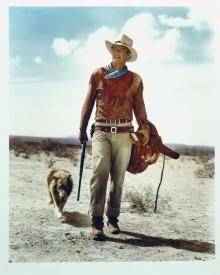 John Wayne has never been better than in Hondo

Released several months after Shane, I wonder how much of this John Wayne film was inspired by it. Both movies start with a strange cowboy showing up out of nowhere to help a family out. Both families have a boy who quickly comes to admire the cowboy. The most notable difference is the boy’s father is absent here and as Patrick wrote; the cowboy and the mother almost instantly have eyes for each other. Her interest is obvious in how she stares at him.

One of the most strangely erotic scenes happens early on when Wayne tells a disbelieving Paige that Indians can smell white people and as he is half Indian, he can as well. The scene then becomes obviously sexual when he says to her, “I can smell you when I am downwind of ya.” He then moves in close and goes into great detail about all the aromas he can smell on her. He ends with, “Besides all that, you smell all over like a woman. I could find you in the dark and I am only part Indian.” Someone needs a cold shower.

Wayne is playing his usual tough guy but when talking about his Indian wife he becomes sentimental. He compares his wife’s spirit to Paige’s but not her looks. Paige then states she knows she is homely. Wayne agrees, in so many words. Wayne then talks about trust being more important than good looks, just before giving her a farewell kiss. Soon thereafter, Paige gets visited by a group of Apache who insist she marry one of them. I guess they are also not bothered by her being homely.

The movie is not all romance. Wayne goes into town, gets into a bar fight and discovers what happened to Paige’s husband. On his way back to Paige’s ranch, Wayne gets attacked by a few Apache but after killing a couple of them he soon finds himself pursued by an army of them. It is a great chase on horseback across some rugged land. It was filmed in Mexico and Utah.

With some romantic intrigue and the ever threat of war with the Apache, Hondo is an entertaining watch. Some interesting aspects of this film are John Wayne’s methods of education. As logical as they may have sounded at the time, they would today be considered outright cruel. He tells Paige that you can train a dog to smell an Apache by paying an Apache to beat the dog regularly. When Wayne finds out Paige’s six year old cannot swim, he literally picks him up and tosses him in the river. I wonder what kind of parent Wayne was in real life?

Filmed beautifully in color, Hondo quickly distinguishes itself from Shane with it's quicker pace and more action. I agree with Patrick that Hondo is easily one of John Wayne best westerns. It is certainly one of my favorites.