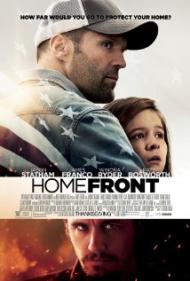 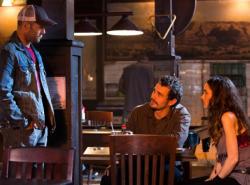 As I watched the opening credits for Homefront, I was a bit surprised to notice that the screenplay was written by Sylvester Stallone. By the time the end credits rolled, I was thinking how this script could have only been written by Stallone, or any teenager who has ever seen an action film. The plot is simple and the characters are so one dimensional that a cardboard cut-out could have stood in for most of the cast members without the movie suffering in the slightest.

After a brief opening action scene involving an undercover DEA agent busting a drug ring, the film moves quickly to a small Louisiana town.  The (semi) retired DEA agent, Phil Broker, and his daughter Maddie are trying to live a quiet little life. He repairs the front porch stairs when not taking his daughter horseback riding. Their only problem is that they live in a town full of assholes.

One day Phil is called to Maddie’s school after she beat up a bully who started a fight. The school psychologist stares googly eyed at Phil while the bully’s mom curses and demands that her husband beat up Phil. Of course Phil is played by Statham so the poor guy is quickly put down. This incites the guy’s hysterical wife to tell her meth manufacturing brother, nick-named Gator of all things, about Phil. Being the loyal brother and all-round douche bag, Gator sneaks into Phil’s house, abducts Maddie’s cat and finds Phil’s boxes of files, which reveal his undercover past. Gator decides to use this very convenient information to his advantage.

Based on a novel by Chuck Logan, the script had apparently been sitting around for a while. It is exactly the kind of quickie action films Stallone was putting together in his heyday when not making a Rocky or Rambo sequel. You could say that these types of films knocked him off his pedestal. If this was made twenty years ago it would have starred Jean Claude Van Damme. I like Statham, but I would actually have preferred it starred Van Damme. At least then I could have laughed at his accent and blank stare that he confused with acting.

Statham plays his role so straight that it does not make sense. Some local idiots start a fight with him and he lets the local law enforcement and citizens of this red neck town think it is his fault. He chooses to never press charges for some reason. The sheriff is more suspicious of the new guy in town, simply because he is new, than he is of the known local drug dealer. He is nearly as helpful as Sheriff Teasle in First Blood (1982).

I have no idea if James Franco is a pot smoking stoner in real life or not but he clearly has a fascination with roles that involve drugs. Pineapple Express (2008) and This is the End (2013) are the most obvious examples. I wonder why a college graduate, California born and raised Jew, would be interested in playing a southern stereotypical villain in a “B” action movie?  My only guess is that it was a role he wanted to cross off his bucket list. No matter what the reason, the only thing he brings is his name. As long as they spoke slow and smiled like they are a little crazy, any wannabe actor in Hollywood could have played his role just as well, and I am sure there are some that actually have a real southern accent.

Homefront is as predictable as a WWE wrestling match. In this corner we have the single father, former lawman, while in the opposing corner is the local drug manufacturer, wanna-be big time gangster. Let’s get ready to rumble! Yawn.