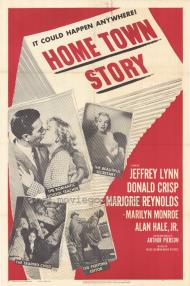 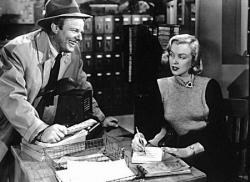 Home Town Story is a completely forgettable film. If it were not for two of it's co-stars, this film would have long disappeared. Alan Hale jr would go on to play Skipper on television's Gilligan's Island and of course Marilyn Monroe.

The plot centers on a bitter politician, Blake Washburn, who lost his reelection bid. He attempts to get revenge on his opponent by writing negative editorials about his opponent's father's local company. He gets his readers a bit riled when he goes on about the companies huge profits. In a groan inducing scene, the owner of the factory comes into Blake's office and gives a speech on the greatness of profits for everyone. Later in the movie, Blake's little sister gets trapped in a cave. The factory owner and his equipment come to the rescue and thus Blake learns to see big business in better light.

Don't get me wrong. I fully understand that the very greatness of The United States of America is derived from our capitalist society. Socialism does not encourage success. It attempts to maintain a status quo at best. However, this movie is so adamant about it's capitalist message that the plot becomes secondary.

Alan Hale jr plays the one and only character with any life in him. He and Monroe share the movie's best scene. Hale flirts with Monroe, who responds very cool. She explains that she treats men with respect so they will do like wise. Hale responds, "Is that a proven theory or something your just trying out?" 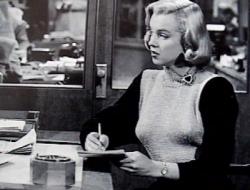 This movie is only remembered because of Marilyn Monroe, without her no one would care that Alan Hale Jr. was in it. It's true that he is by far the most interesting male character but in a movie this bad that hardly matters.

Donald Crisp is also in the movie as the wealthy benevolent businessman that comes to the rescue. Eric called his big scene groan inducing and the speech is pretty bad but I thought he was good in it. His character boasts that he will soon turn 65 and still has the vigor of a young man. In real life Donald Crisp was over 70. He had been around since the dawn of movies having played Ulysses S. Grant in Birth of a Nation in 1915. He continued working for another 12 years and by the end listed more than 300 movies on his résumé.

Watching this movie was like being back in seventh grade social studies class. They always made us watch cautionary tales in black & white with obvious political slants and bad acting. Jeffrey Lynn is just plain awful as Blake Washburn. He makes you feel absolutely nothing for this guy, except perhaps a vague pity.

This was Marilyn Monroe's tenth screen appearance. As always she is memorable. Everything she was in will live as long as celluloid, even a movie as unworthy as Home Town Story. 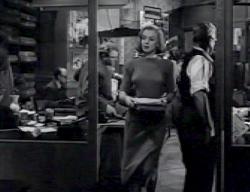 Once you learn that this movie was paid for by General Motors to promote their vision of big business, it all falls into place. It explains the simplistic philosophy and the promotion of big business and profits as the answer to all of our problems. They should have shown this movie down at Zucotti park. I'm sure the Wall Street Occupiers would have gotten a good laugh at it.

As propaganda films go this one is pretty bad. Anyone who believes that capitalism is a good thing will agree that profits are necessary. No one wants a company to lose money, from the owner down to the worker who could lose his job. And yet the existence of profits is all the bitter ex-politician Blake Washburn complains about in his newspaper. Then the kindly old capitalist comes in and tells him that profits are good and then backs it up by saving his sister's life. But what does that really prove, except that being rich and being able to own your own plane, is really awesome?

What about asking what happens to the profits? Why not ask why the workers don't get paid more or that the company donate more to charity, or offer health insurance, or profit sharing? Is Mr. McFarland going to personally fly the sick children of any of his employees to a hospital if they get sick? Or does he just reserve that privlege for Newspaper Editors who have the power to make him look bad?

I actually agree that profits are a good thing, but I just wanted to point out how dumb and unchallenged the message of this movie is in its delivery.

Some parts of  the actual plot are so bad that they're quite funny. I mean, whose genius idea was it to take a bunch of third graders to an abandoned mine as a class trip? Isn't that just asking for trouble? And Janice, who is engaged to Blake, has to be the least supportive girlfriend in the history of the movies. In one scene she comes out and tells him that she thinks he's a lousy politician and the voters were right to vote him out of office. How harsh is that?

Although this movie is only remembered because of Monroe, she has little to do except look good. The most interesting thing about her performance, apart from her prominent breasts, is that her speaking voice sounds much deeper and much less breathy then it would in her later starring roles. You can tell that she hadn't perfected the full-on Marilyn Monroe persona yet.

Alan Hale Jr. is the real light of the movie. He brings some much needed comic relief and a spark that is completely absent whenever he isn't on the screen.

This is a minor little piece of propaganda that as Patrick said, seems more appropriate in an old social studies class than it does in a theater. As entertainment, it's just plain embarrassing. Only the presence of a young and radiant Monroe has kept it even marginally around.