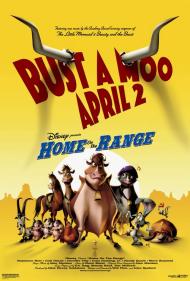 Directed by: John Sanford, Will Finn 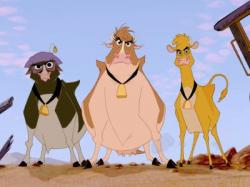 It's been quite few years since Disney produced a non-Pixar cartoon classic. While the early 1990s saw a plethora of Disney classics such as Beauty and the Beast, Aladdin, and The Lion King, the house of mouse has failed to match the success of those movies with anything they've done since. Their latest effort, Home on the Range, does nothing to change that. Not that it's a bad little cartoon, but it's certainly nothing special. It's simply that apart from the big name cast doing the voices, the movie doesn't rise above anything you're likely to see on your average Saturday morning.

The premise of the story is straight out of an old 1940s cowboy serial, only this time it's the animals that are the stars rather than the people. It's a Western for members of PETA.

Maggie (Rosanne Barr), a prize winning show cow is moved to a small farm named Patch of Heaven when the rest of the herd on the ranch she was living on were rustled by Alameda Slim (Randy Quaid). Life seems idyllic in her new home, with all of the, oh so cute, animals living in harmony with Pearl, the farm's owner. Shortly after her arrival, Maggie realizes that there's a problem in Patch of Heaven when the Sheriff shows up with a notice from the bank stating that unless $750 can be paid right away the farm will be put up for auction.

By a lucky coincidence, the bounty on Alameda Slim is also $750. Maggie, with the farms other two cows, Mrs. Calloway (Judi Dench) and Grace (Jennifer Tilly), decide they've got to capture Slim and collect the bounty to prevent Pearl from losing the farm. Unfortunately, Buck (Cuba Gooding Jr.), an adventurous horse, has the same idea. He, along with bounty hunter Rico, sets off in pursuit of Slim at the same time as the cows.

Although the film does feature several songs written by previous Disney songwriter Alan Menken, it's hard to call it a musical since the characters don't break into song, but rather, the music is played over the action. Thankfully, that means Rosanne doesn't sing. And while the songs are pleasant enough, they're not exactly memorable either. You probably won't be humming them as you leave the theater.

Although most of the humor is the slapstick variety, quite definitely aimed at the under ten set, the writers did throw in some jokes for the adults. It's pretty much guaranteed that when Rico says, "Mother of mercy, is this the end of Rico?" near the end of the film, that none of the kids will know that it's an Edward G. Robinson quote from 1931's Little Caesar.

The one standout in the movie is Jennifer Tilly as Grace. Her ditzy "blonde" cow is definitely the funniest character. She gets some clever lines like when she says to one of the bulls, "I bet you're a Taurus aren't you?" Her off-key singing is also quite humorous.

Although it's amusing in parts, and likely to please younger children and vegetarians, Home on the Range just lacks anything special to make it stand out beyond your average cartoon. It's definitely no Finding Nemo. Perhaps Disney should think about starting up negotiations with Pixar again before it's too late.

Scott is right about the age appreciation on this movie. My eight year old laughed quite a bit through the movie. My ten year old found it, at most, moderately entertaining.

With Home on the Range, Disney again flaunts it's liberal politics. Pearl is set to loose her farm. The bank is going to foreclose. Pearl is behind on her payments. In true liberal Michael Moore fashion, Pearl is played to be the victim. She is just so sweet that she never eats or thinks to sell any of her valuable animals.

Pearl, and the script, treat the animals as if they are far more than just cattle. They have personalities and show very human emotions. It is a confusing set up to have Pearl own a cattle ranch with livestock that are her best friends. It would have been different if she ran a zoo where income came with visitors and not the selling of her investments.

Consequently, she has no money, can't pay the bills and thus is getting kicked off of her land. She may like animals but that hardly excuses her from the responsibility of paying her bills. Alameda Slim is a bad guy because he rustles cattle. However, buying Pearl's farm in foreclosure is perfectly legal. If she does not want him to do that all she needed to do was make a mature decision, even if it involves a sacifice, just as most adults do at different points in their lives.

Disney also continues to attempt to redefine "family". Pearl adamantly calls her cows her family. Some people may think that sounds sweet. I think it sounds very sad and slightly disturbing. Home on the Range is just another one of Disney's liberal message films masked as family entertainment.