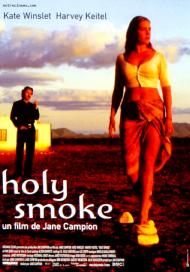 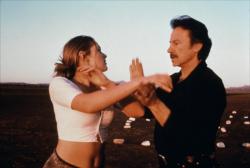 If you've ever wanted to see Kate Winslet piss herself or wondered what Harvey Keitel would look like in a little red cocktail dress (and be honest, who hasn't?) then Holy Smoke is the film for you. Directed by Jane Campion and written by her and her sister Anna, this quirky dramedy starts off strong before becoming a muddled mess with a too pat ending.

Winslet plays a young Australian woman named Ruth who, while on vacation in India, falls under the spell of a charismatic guru after witnessing a Hindu ceremony. She begins calling herself Naznee and refuses to come home. Her mother travels to India and lures her away by telling her (falsely) that her father has had a stroke. Once they get back in Australia, Ruth spends three days in a remote cabin with P.J., a professional cult-deprogrammer, or “exiter” as he is known in this film. He is played by a too old Harvey Keitel.

What began as a promising religious satire on Western religions' hypocrisy towards Eastern religions becomes a simple battle of wills between the two lead characters. Ruth wields her sexual power over P.J. and he caves in quickly. They go toe to toe insulting each other and looking for a weakness. They end up wrestling around in the desert with P.J. wearing nothing but the red dress mentioned earlier. Ruth isn't a nice person and P.J. seems quite inexperienced for a man who has supposedly deprogrammed nearly 200 previous subjects.

The biggest portion of the movie concerns this struggle between Ruth and P.J. but it isn't very compelling or funny. They should have either gone for a more cerebral approach about the ins and outs of brainwashing or upped the comedic aspect and gone all the way in that direction. Instead we get a watered down combination of the two that is less than satisfying. The main point of the movie seems to be that women have sexual power over men. Deep it isn't. And the “happy” ending where both lead characters learn a valuable lesson and wind up well adjusted seems downright simplistic. Despite a blistering performance from Kate Winslet, Holy Smoke quickly dissipates.