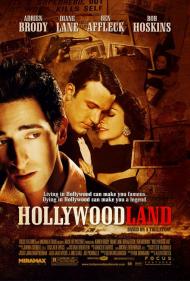 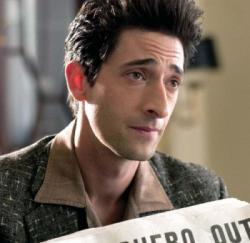 Hollywoodland is a well made film with high quality production values and good acting that just needed tighter editing and a more satisfying ending. It stretches on for far too long and contains far too many subplots, all of which could have been removed without hurting the main story. And by keeping the central mystery of the story a mystery, you are left with a feeling of, "That's it? That's what I sat through for over two hours?".

While all the previews for this movie will lead you to believe that this is a movie about the mystery surrounding Superman actor George Reeves' death, that is only partly true. Reeves death is the impetus of the plot and it does feature heavily, but Affleck, who plays Reeves, is not the star. Adrian Brody as Louis Simo, the private investigator hired by Reeves mother to disprove the suicide theory, is the star. This is where the movie went wrong. The Reeves storyline, which is told in flashbacks as Simo digs into his background, is the most interesting part of the story. Unfortunately, too much time is spent on Simo's personal life; his troubles with his ex-wife, his son, and another one of his cases.

The biggest disappointment to me about the movie though is the ambiguity of Reeves death. At different times during the story, Simo is presented with a scenario as to how his death could have come about. Was it Reeves fiancée, with whom he reportedly was breaking off their relationship? Was it the movie studio mogul, whose wife Reeves had carried on an affair with for years? Or was it, as the police reported, a simple case of an actor, with his career in ruins, taking his own life? All three of these versions are played out in Simo's mind, but none of them are presented as the definitive end of Reeves life.

At least, since you have to look at it for so long, the movie does look good. The sets, the costumes and the locations are all superbly done and it's easy to believe that you are in Hollywood of the 1950s. There's a funny moment in the movie where Reeves, whose career was foundering at the time, sees Rita Hayworth in a restaurant being followed by a group of photographers. He manages to stand beside her just long enough so that he appears in the papers the next day in one of the pictures.

The acting is also well done. Affleck gives one of his best performances to date as Reeves, perhaps aided by his own recent career speed-bumps. And Diane Lane, as the aging beauty, is equally good. Their moments together are some of the best scenes in the movie. Affleck also provides some of the only lighter moments as he and Reeves have some fun with their Superman persona. "You can't see my penis in this thing, can you?" he asks, just before he makes a public appearance as Superman.

When you walk out of a movie, the one thing you should be leaving with is a feeling of satisfaction. You just spent anywhere from 5 to 10 dollars and invested an hour or two of your valuable time in watching it. Hollywoodland merely teases you with satisfaction, but ultimately comes up short. 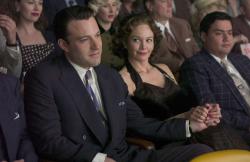 I couldn't agree more. I was left with the same feeling of dissatisfaction and also felt the ending dragged a bit. At the same time Hollywoodland does magically conjure up the world of the old California dream factory.

It's not even that the Adrian Brody part is bad. It just seems unnecessary and takes away from the real meat of the movie. Brody continues to prove his acting chops though. He delivers the 1950's gumshoe dialogue perfectly. The motivation for his obsession with the Reeves' case is never fully justified. Is he just desperate for a story and the ensuing publicity, or is there a deeper reason? We don't really find out.

Scott is right about the performances of Lane and Affleck, they are both spot on. Especially Affleck. He deserves an Oscar nomination. He embodies the character so effortlessly that he doesn't seem to be acting at all. In comparison to Brody's Method acting Affleck's old fashioned style comes across larger-than-life. He has Personality.

In sports lingo Hollywoodland is like a long fly ball that veers foul at the last second. 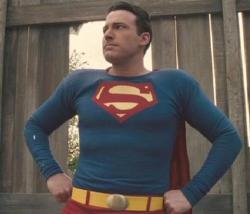 Although this movie is about the mystery surrounding Reeves' death, the theme is about him being unsatisfied with his life. George Reeves had small roles in several significant films. He starred in the most popular children's show of the 1950s. Looking in, from the outside, Reeves had a fortunate life. Fame, money and more women than he could handle. Yet he, according to this movie, did not see that.

As Scott and Patrick wrote, this movie has several plot lines going at once. The reason they are there is to support the movies point that we should appreciate what we have. Reeves never fully appreciated his fame and role as Superman. Simo does not appreciate his ex-wife and son. The third plot involves a man who insists that his wife is having an affair when no proof is ever presented. Hollywoodland is about being happy with what you have. In all plot lines, a man is reaching for something that he already has. He just does not realize it. Reeves had fame and respect. Simo has, what appears to be a nice wife, and son. The third plot has a man that wants desperately to prove his wife is having an affair when she isn't. All men get into trouble because they only see what they want to see.

The three plot lines all say variations of the same thing. The third one is a complete waste of screen time. At most, Simo could have told a story to someone about a man who accused his wife of having an affair and ended up killing her. It would have saved some screen time and kept the focus on Reeves and Simo.

Although the editing was not tight enough, the acting is. Brody is good and shines whenever he has to deal with his son. Lane is good, as usual. Her best scene comes when she tells off Reeves by pointing out his flaws. She demonstrates her anger but also just how desperate she is. Finally, it is Affleck who steals the movie. So often he has smiled his way through films, but here he plays an actual character. For me, a good sign that someone is doing a great job of acting is when you see the character and not the actor. For the first time in his career, I didn't see Affleck.