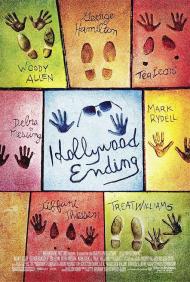 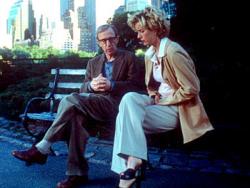 There's something very comforting in watching a Woody Allen movie. From the moment those white on black credits appear on the screen accompanied by the familiar strains of some old jazz piece or musical standard, it's as if you're seeing an old friend you haven't seen for a few years. You know what sort of jokes you're going to hear, what sort of characters you're going to meet, and you definitely know where it's all going to take place. You just know that all the typical Woody Allen stuff will be there; the New York Setting, the angst-ridden characters, and of course a leading lady who will be about forty years too young for him.

Hollywood Ending easily fits the Woody profile. He plays a neurotic New York film director who used to be considered cutting edge, but has since fallen on hard times due to his reputation for being difficult. His ex-wife (played by Téa Leoni (also known as woman too young for Woody #1)) however, is now engaged to a movie studio executive and has come across a movie she thinks Woody would be perfect to direct. After some convincing, she lands him the job for $500,000 and 1/10th of a point after the movie breaks-quadruple even.

Woody, who is now reduced to directing commercials, is living with a young actress (played by Debra Messing (also known as woman too young for Woody #2)). Shortly after he accepts the movie, he begins to clash with the executives. He wants to hire a foreign cameraman; so foreign in fact, that he doesn't speak any English. The set designer that he chooses wants to build Central Park and the Empire State Building (or at least the first 20 floors) in a sound stage.

The first day of the shooting, Woody wakes up only to discover that he is blind. A quick trip to the doctor reveals that it's not physical, simply a psychosomatic illness. At the urgings of his agent, who knows that he will never work again, if word of this affliction gets out, Woody decides to try to bluff his way through the movie.

The jokes start to get a little broader at this point than are usual from Woody Allen, prat falls and walking into furniture, etc. His verbal humor is still there, there's just also a lot more of the physical kind than you normally expect from Woody. And some of it works and some of it doesn't. At one point when he is alone in the dressing room of one of the female stars of the film he is shooting (played by Tiffani Thiessen (also known as woman too young for Woody #3)), and she makes a pass at him by taking his hand and placing it over her breast, he blithely replies, 'No, no, I'm ok, I don't need a throw pillow.' 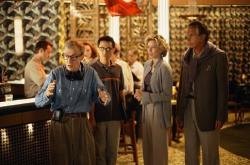 Scott, I’m afraid a bit of nostalgia and your fondness for the Woodman blinded you (pun intended) on Hollywood Ending. I honestly think this is his least funny comedy since A Midsummer Night’s Sex Comedy which Eric and I went to see upon its release way back in 1982. I guess when you are as prolific as Woody you are bound to misfire every now and then.

The main problem is the central conceit of a director being stricken with a psychosomatic blindness but somehow still being able to direct a movie. It’s just too silly of a plot device for even Woody Allen to pull off.

And speaking of Woody, his performance is not up to snuff. His timing is off. He stumbles over words and it’s more than just his usual stammering shtick. It happens so much that it begins to seem as if he is trying to remember his lines. I don’t think it’s merely coincidence that he hasn’t made a movie where he played the main character since this one.

Although to his credit there are individual scenes that work. The young Chinese translator (Barney Cheng) is funny. There should have been more scenes with him and Allen bantering on the set. And you can always count on Woody the screenwriter to deliver at least a few memorably funny lines. I laughed when he and Tea Leoni were discussing his hypochondria and she mentions several ridiculous ailments Allen has thought himself stricken with over the years, “Black Plague? An allergy to oxygen? Elm White? Only elm trees get elm disease.”

As Scott pointed out the age difference between Allen and his leading ladies has gotten more and more ludicrous over the years. It is just one of those things you have to accept when watching his films I guess. But that doesn’t make the sight of a shriveled wizened old guy kissing a pretty young woman any less disturbing.

The slapstick doesn’t work either. Allen talking to Treat Williams but looking in the wrong direction just isn’t funny. I mean he can’t tell from the sound of Williams voice that the guy is sitting across from him and not next to him? It is lazy gag writing that sinks like a rock.

SPOILER ALERT: Although his movie within the movie turns out to be crap it is, of course, hailed as a masterpiece in France. This leads to the funniest line of the entire movie when Allen says what Jerry Lewis has been thinking for decades. “Thank God the French exist.” 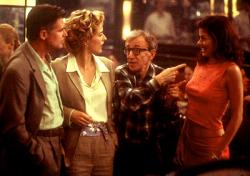 Scott finds something very comforting in watching a Woody Allen movie. I find it nauseating.  I am not exactly sure when Woody Allen turned into a little troll for me, but it happened.  Perhaps it was that day in 1982 when he bored me to tears with A Midsummer Night’s Sex Comedy or the long list of disappointing films since.  Maybe it was his personal life of having sex with his foster daughter.  Either way, it is as if I'm seeing an annoying old acquaintance I have not seen for a few years, or ever missed.

Allen's clear hatred for Hollywood is obvious.  The fact that Val directs a movie even though he is blind and no one notices is a not so subtle slam on tinsel town's worship of the movie making process.  Everyone thinks his awkward directions are just a sign of his artistic genius.  The joke drags on far too long.

My brothers both already mentioned it and I will ad that I am truly bothered by his leading ladies being so much younger.  Tea Leoni, who plays his ex-wife, is 30 years his junior.  He yells at her dramatically, "How you could leave me for that cheesy windbag!"  As if the answer is not obvious.  Val is a high maintenance, emotional egotist who is older than her father.  The more fascinating question would be what in the hell did she ever see in him in the first place.

The film has a scene where she mentions that when they first met she was a small town girl and he was cutting edge.  When referring to his current much younger ditzy girlfriend they describe her as trailer park or one step above.  Clearly Allen thinks little of people outside his circle.  I like how he is embarrassed by the producers finding out he is dating the airhead actress who just auditioned, not because he is dating someone forty years younger.

The most fascinating scene in the entire film was when Val visited his son.  They do not agree on taste and his son is the only person in the film who wants nothing from him.  It is the closest the movie ever gets to a real moment.  Hollywood Ending should have steered away from Allen's relationships with the much younger women and included more scenes with his son. His age would have been less relevant.  It would have also made a more original story and gave Allen someone unique to play off.