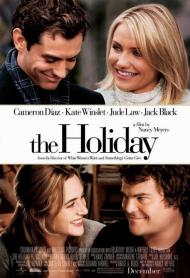 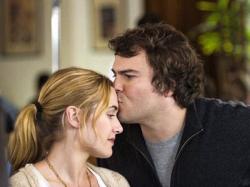 Kate Winslet and Jack Black in The Holiday.

Romantic comedies tend to be very formulaic. A girl meets a boy, girl and boy have a problem, girl and boy resolve their problem, girl and boy live happily ever after. The Holiday, written and directed by Nancy Meyers, follows, for the most part, just such a plot. Only, Meyers is not content with this plot playing out once, she has to do it two times no less.

Amanda is a Hollywood movie trailer editor. She often sees her life through her work. She and her boyfriend break up at the beginning of the movie because she never wants to have sex and he has an affair. She can also never cry because her dad left her mother when she was a teenager. In short, she's cold. Iris works on a London newspaper and is hopelessly in love with a colleague who has just gotten engaged to another woman. Never mind that she has been in love with him for three years and he has dated other women in the process. She is a living doormat. To escape their love lives, they agree to switch homes for two weeks over Christmas.

Iris finds herself smack dab in the middle of sunny L.A. Her neighbor is an old movie screenwriter who recommends old movies for her to watch. He also loves to talk about the old days as well as spout advice via movie metaphors, "Iris, in the movies, we have leading ladies and we have the best friend. You, I can tell, are a leading lady, but for some reason, you're behaving like the best friend." She meets and takes a liking to a man who writes scores for movies. He also likes to recommend movies for her to watch.

Amanda spends one boring night in Iris's cottage and decides the vacation was a bad idea until Iris's brother shows up at her door. They are immediately attracted to each other. As Amanda puts it,"I just broke up with someone and considering you just showed up and you're insanely good-looking and probably won't remember me anyway... I'm thinking we should have sex..." It soon becomes clear that Amanda has gotten herself into another bad relationship.

The Holiday makes nods to old Hollywood romantic comedies. Iris learns to stand up for herself by watching strong willed women in old films, like Barbra Stanwyck, Irene Dunn and Rosalind Russell. I am not sure if this was Meyers point but what this movies demonstrates that women have become wimps, at least on film. Any movie buff, of films from the 1940's or 50's, can tell you that women stood up to men then and were never doormats. Imagine if this movie were made in 1940 and starred Katharine Hepburn and Bette Davis. They would have never been the helpless victims of a man or their own emotions.

My wife enjoyed this movie, as I guess many woman will. Perhaps they can relate to these characters. I enjoyed it for the comparisons of old and new films, or at least how characters are written differently then and now. At well over 2 hours long it could have definitely been trimmed. Amanda's old boyfriend could have been cut entirely from the film as could the old screenwriter next door. Sure he is there so he and Iris can teach each other how to stand on their own two feet, but at 138 minutes Iris does not need a new boyfriend and a new, old teacher. Their characters should have been combined and saved screen time. 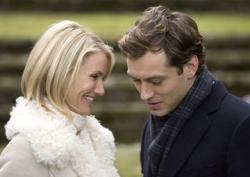 Cameron Diaz and Jude Law in The Holiday.

This movie helped prove my theory that I don't mind long movies at home as much as I do in the theater. Like Eric, I thought The Holiday ran a little long, but because I could pause it when I wanted to, the length didn't bother me quite so much.

The length also didn't bother me as much as it might have because I did enjoy the stories. As Eric said, romantic comedies almost always follow a set pattern. In this one, it only takes 5 minutes, just long enough to introduce the characters, for it to be obvious who will end up with whom. The important thing is to enjoy the ride.

Although I agree with Eric that the plot could have been trimmed, I actually disagree with the way it should it have been done. Rather than eliminate Eli Wallach's character, I would have removed Jack Black's. I didn't think that he and Winslet shared a very strong chemistry and since Iris seems to be a woman who bases her self-worth on whether or not a man loves her, it would have been stronger to show her realizing that she doesn't need to think that way. Wallach's old writer uses the line you mentioned Eric about being a leading lady and shows her the old movies filled with strong female characters. The real climax to Iris's story is when she tells Jasper that she's not going to be his doormat anymore.

With Amanda (Diaz) it makes more sense for her to fall in love. She's shutdown emotionally since her parent's divorce when she was a teenager and it isn't until she truly falls in love that she gets past that emotional trauma. Her relationship with Jude Law's Graham is a little sticky sweet, especially when his daughters are introduced, but I still enjoyed it.

The cast is a big help in overcoming the movie's weaknesses. Winslet, Law, Diaz, a subdued Black and Wallach make up for the cliches and occasional sticky sweetness.

There have been better romantic comedies, but this one is enjoyable enough if you watch it without too high of expectations. 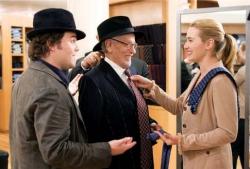 Jack Black, Eli Wallach and Kate Winslet in The Holiday.

Yeah, this is a fun romantic comedy featuring affable characters, even if the story is predictable and a tad on the corny side. I agree it runs a bit long but I have a third option that differs from either of my brothers. I don't think they should have cut either Black or Wallach's parts. Meyers simply needed to tighten the rhythm of the individual scenes. She needed to start them all a few seconds later and end them sooner. Ironically, for a movie that pays homage to classic screwball comedies, the comic timing is rather anemically paced.

The cast is terrific. Diaz's Amanda is more likable than most of her characters. Winslet plays dowdy quite naturally. Law is charmingly ordinary (or ordinarily charming?) “I have a cow, and I sew. Now how's that for hard to relate to.” Black is subdued but still funny. Wallach proves that acting careers don't have to end at 90.

Arthur Abbott is a classic Hollywood type and provides a great part for an old man like Eli Wallach. He made his big screen debut in Elia Kazan's movie version of Tennessee Williams' Baby Doll way back in 1956, at the relatively advanced age of 40. In his remarkable career he's worked with the likes of Clark Gable, Clint Eastwood, Steve McQueen, Marilyn Monroe, Yul Brynner, Peter O'Toole, Barbra Streisand and Al Pacino. Eli Wallach turns 97 this December (2012).

The contrast in the lifestyles and accommodations of the two house-swapping women is portrayed in an entertaining fashion. Amanda has the classic Beverly Hills mansion with all the amenities, while Iris lives in a quaint little country cottage in what looks like the Shire. I half expected Bilbo Baggins to go strolling by. The final scene is about as heartwarming as romantic comedies set at the holidays can possibly get. The Holiday is touching and funny despite being predictable and a tad long.