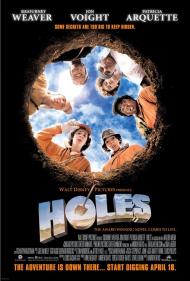 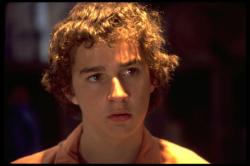 Watching Holes is like looking at your leaf-covered yard in autumn. You know where all the leaves are going. You just are not sure how or when it is all going to happen.

The main thrust of the plot is that a teenager, Stanley, played by Nickelodeon's Even Steven star Shia Baleouf, gets falsely accused of stealing a pair of shoes. He gets sentenced to 18 months at a boy's detention facility called Camp Green Lake. Green Lake is actually a desert. All of the inmates are required to dig a hole each day. They are never told why or what they are looking for.

Meanwhile, Stanley's grandpa narrates a story about the family curse. An ancestor left the old country after his ladylove did not return his affection. He left before completing a task that a Gypsy, Eartha Kit, required of him and thus a curse was laid upon his family.

There is also a love story that took place years ago on the very spot where Camp Green Lake now stands. This is about a white school marm, Patricia Arquette, and a black handyman. A jealous man, who likes the school marm, shoots and kills the handyman as he is rowing his boat on the lake. The school marm becomes distraught and becomes an outlaw known as 'The Kissing Bandit.' She leaves a lipstick kiss mark on all of her victims.

Yes, all of the plots end up in a neat pile of leaves. It just takes a while to get there. Louis Sachar wrote the novel as well as the screenplay. The best way to translate a novel to a screenplay is to keep the author as far from the movie as possible. Imagine how immensely bloated The Lord Of The Rings movies would have been if the long-winded J. R. R. Tolkien had written the screenplay. At 117 minutes, this family film gets tedious and a bit confusing in places. Authors are to close to the subject. I believe they are unable to make the appropriate cuts needed to keep the pace going.

The performances help. Jon Voight over acts as the camps tough guy, Mr. Sir. Sigourney Weaver is great as the dominating warden. She actually plays her character straight to good effect. Henry Winkler is under used as Stanley's father who is trying to invent an odorless shoe. Shia Baleouf is a fine actor but this film offers little in the way of demonstrating it.

This DVD is a great way to spend a rainy afternoon. Just don't leave the room without pausing it first. If you don't, you will surely get confused.