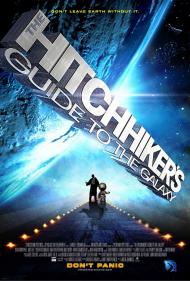 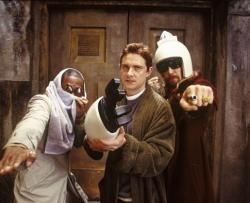 Mos Def, Martin Freeman and Sam Rockwell in The Hitchhiker's Guide to the Galaxy.

The Hitchhiker's Guide to the Galaxy is a fast paced, funny science fiction movie. While it doesn't surpass, or even equal the book upon which it is based, what movie ever has? It contains enough action, humor and memorable characters to please newcomers to the title without disappointing longtime fans.

The story remains relatively faithful to the book, which in turn was only relatively faithful to the BBC radio series that started it all. Arthur Dent (Freeman) wakes up one Thursday to discover in rapid succession that his house is about to be bulldozed to the ground, one of his best friends is from a small planet somewhere in the vicinity of Betelgeuse and that the Earth is about to be destroyed by an alien fleet to make way for a Hyperspace expressway. Fortunately for Arthur, his alien friend, Ford Prefect (Def), is a roving reporter for a guidebook entitled "The Hitchhiker's Guide to the Galaxy", and he is able to rescue Arthur just moments before the planet is destroyed. This sets Arthur on an adventure that could lead to the discovery of the meaning of everything or might just leave him stranded in deep space with only a towel for protection and no tea.

Visually the movie is without a flaw. Even though not everything is how I pictured it would be, where the movie differs from my imagination, the movie is better. From the Starship Heart of Gold to Marvin the Paranoid Android to the Vogons and right on through to the Magrethean factory floor, there's not a visual that disappoints. A great deal of attention has been paid to get the look and feel right and it shows.

The casting of the leads is also well done. Freeman as Arthur and Sam Rockwell as Zaphod Beeblebrox are both inspired choices who make the roles their own. However, it is Def as Ford Prefect who nearly steals the movie. His subtle use of his towel throughout the entire film is classic. The only disappointment is Zooey Deschanel as Trillian. She has the right look, but brings nothing special to the role. This is partly because Trillian has always been the weakest character in the story, but also because of Deschanel's wooden line reading.

Several new plot elements have been added. A subplot involving Jon Malkovich as Humma Kavula (a new character created by Adams specifically for the movie) is a welcome addition that includes some of the movie's funniest moments as well as a (if you look closely enough) cameo appearance by the original Marvin robot from the BBC Television version of the story. Less successful is the inclusion of a love triangle between Arthur, Trillian and Zaphod, something only hinted at in the books. There's never any chemistry between Arthur and Trillian and apart from the fact that Zaphod owns a spaceship, it's never quite clear what she sees in him either. It feels as though the romance was added simply for the sake of adding it.

The story moves at a frantic pace, keeping the jokes and the action flying at you in a way that might be confusing to viewers unfamiliar with the story. There are also numerous inside jokes and elements that will require several viewings to pick up on. Simon Jones, the original Arthur Dent, makes a cameo appearance as does Douglas Adams himself. There is plenty here to please the most dedicated fan, but will pass unnoticed by the casual viewer.

With any adaptation, there is always the worry that some big movie studio will muck up a beloved story. The Hitchhiker's Guide to the Galaxy proves that this doesn't always have to be the case. 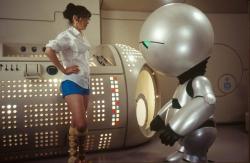 Zooey Deschanel and Marvin the Paranoid Android in The Hitchhiker's Guide to the Galaxy.

The Hitchhikers Guide to the Galaxy does not translate very well in film. Listening to the radio show or reading the books allows you to imagine the goings on. Watching it happen drains much of the humor away. I cracked up listening to the radio program. A whale trying to adjust to suddenly coming into existence sounded hilarious on tape. Watching it is nearly humorless. The whale dies!

Zaphod in the books is obnoxiously funny. In the movie he is just plain annoying. The love triangle is obtrusive to the plot. These characters are all absurd beings living in an absurd universe. To impose such a normal plot device as a love story simply destroys the film. Hitchhikers Guide to the Galaxy is a science fiction comedy of surprises. Having read the books and heard the radio programs left the punchlines without much punch.

This movie is atheistic. It shows aliens having created the earth as a computer run by mice. It pokes fun of God with such book titles as "Who is this God Person Anyway?" Sure it is all meant as a joke but it is insultive to all Bible believers.

My final complaint is that of Marvin. I never pictured him looking so simple. He looks like an android teletubby. Rickman has the voice down pat, but Marvin looks too cute to be so depressed and manic.

The cast is great! They all play zany well enough. However, none of the characters are solid enough to care about or even like. Watching this movie made me feel like Arthur Dent at that costume party. He is looking at everyone in costume and then blurts out that, "Everyone here is an idiot." 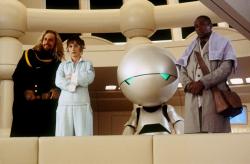 Sam Rockwell, Zooey Deschanel, Marvin the Paranoid Android and Mos Def in The Hitchhiker's Guide to the Galaxy.

Unlike my brothers I have never read any of the Hitchhiker books or listened to the radio program. Perhaps that is why I enjoyed the movie more than Eric did. I found it to be visually creative and funny. And unlike Eric I cared about the characters. Yes they are absurd but in a whimsical and amusing way. And just for the record I thought the whale was hilarious.

I agree that the cast is wonderful. Sam Rockwell and Mos Def are both standouts. Rockwell's Zaphod Beeblebrox is a zany lunatic and Def's Ford Prefect gives just the right sly wink to the audience. And Scott's right about his subtle Linus-like uses of the towel. A classic prop.

Alan Rickman, however, steals the movie. His voice and delivery are perfect for the manically depressed robot. Every line he utters is funny. Still, it is Douglas Adams' imagination and amazing sense of humor that are the real stars of the show. His wonderful characters, flippant one-liners and satirical philosophy have created a unique movie. It's sort of like Galaxy Quest meets Monty Python.

The one major flaw is an inherent one. The plot is more like a series of sketches than a cohesive feature length story. There's never any real dramatic tension or sense of danger. But since this is an absurd space comedy and not Star Wars it works.