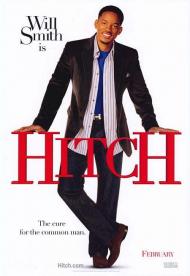 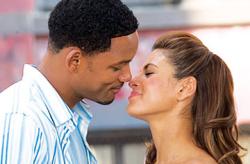 Will Smith and Eva Mendes in Hitch.

Despite the many things that this movie gets wrong, it manages to succeed by showcasing the likeable charisma of its lead, Will Smith, to good effect.

Smith stars as Hitch, a Manhattan Date Doctor, whose specialty is coaching men in methods of winning over the woman of their dreams. One of the biggest challenges of his career comes around when overweight, nerdy Albert (Kevin James The King of Queens) hires him to help win the heart of Socialite Allegra Cole. Soon though, it is Hitch who is in need of assistance when he finds himself falling in love with a gossip columnist played by Eva Mendes. And yes, you can probably guess the ending of the movie before the opening credits have finished playing, but then aren't all romantic comedies that predictable?

Some of the movie's best moments come early in the film when Hitch narrates several scenarios to illustrate how he works. We see several of his clients walking through the steps to winning the girl. The catch to all of this, and what keeps Hitch from being just another sleazy player, is that he coaches how to find love, not just sex.

It's only a pity that in a romantic comedy, the greatest chemistry should take place not between the two people falling in love, but between Smith and James. Hitch's urban suaveness clashes nicely with Albert's nerdy accountant clumsiness. Their time together onscreen provides the biggest laughs.

Eva Mendes, the real love interest in the film, is reduced to playing the stereotypically bitter, but beautiful woman who never dates because men are such bastards, who then falls in love as soon as our hero comes along. Whenever she and Hitch are alone and the dialogue turns serious, the movie becomes awkwardly slow. Perhaps the only true moment of heat that is generated from the two of them comes when they get into an argument and begin throwing food at each other.

The movie also runs long for a romantic comedy (nearly 2 hours) and could easily have been trimmed. Michael Rappaport has a cameo appearance in the beginning of the film as Hitch's best friend. After this one scene, which should have been cut completely, his character never reappears. Perhaps they wanted to leave the scene in because Rappaport is a fairly recognizable actor, but it should have been trimmed (no offense to Rappaport). There are other scenes that could benefit from an editor's knife, as well.

Without a doubt, this is the date movie for Valentines Day, 2005. But then considering that most of the competition is either really bad horror films (I'm including The Wedding Date in that category), or leftover Oscar Contenders, perhaps that's not saying so much. 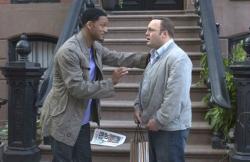 Will Smith and Kevin James in Hitch.

Hitch does get a bit long winded, as Scott wrote, but it is telling two love stories at once. The ironic thing, to me, is that the more unlikely love story, that of Albert and Allegra's, comes across more sincere than the love story between Hitch and Sara. Albert makes Allegra feel comfortable with herself. Allegra never makes Albert feel like an overweight paper pusher. They become completely comfortable with each other.

What does Hitch and Sara get out of their relationship? They never seem to connect. Even on the date, where they spend the night talking, they are both so guarded that they maintain an emotional distance. Sara's boss later explains, "People who are guarded are afraid that you can see right through them."

Other than being beautiful, what does Sara have to offer? Hitch jumps threw hoops to impress her. She plays hard to get because she is supposedly a realist. If she was really a realist would she write a gossip column? Sara is tired of getting hit on by men. "Sometimes it's hard to see the forest through the sleaze." She says at one point. Then why does she hang out at bars so much, if she does not want to get approached? Near the end of the movie Sara betrays Hitch in a huge way with the article. It hurts lots of people yet she does not suffer any repercussions for her poor judgment.

The best part of Hitch,is that it takes the high road on relationships. Hitch's goal is not to get his clients laid, it is to give them the confidence to find the love of their life. Jeffrey Donovan has a brief scene as your stereotypical male horndog. "Get in, get off, get out." Is how he describes his relationships. This movie could have had a lot more spark had this guy been Hitch's client. Hitch is about love and understanding. There could have been all kinds of opportunity for humourous situations having Hitch teach this guy some morals as well as about real love.

The movie spouts philosophy as often as it can. My favorite bit of advise from Hitch is, "Begin each day as if it were on Purpose." It represents the tone of the movie, which is that we are not victims to our lives. We need to only be proactive in searching for love and for that matter everything else.

Hitch is a nice rough draft for a movie that should have gone back for more rewrites before being filmed.