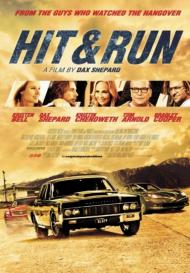 Dax Shepard and Kristen Bell in Hit and Run

Annie and Charles are just a happy couple living in a nice country home in California, when Annie gets offered an interview for a job she wants very badly in Los Angeles.  This is the catalyst that changes everyone's life.  Almost the entire film is Charles driving Annie to her interview.  It sounds simple, right?

The problem is that Charlie is secretly in a witness protection program.   When he decides to go to LA with Annie, he upsets Randy, an inept local Marshall assigned to keep an eye on Charlie.  It also bothers Annie's old boyfriend Gil, whom she mistakenly told about Charlie being in a witness protection program.  Gil still thinks of Annie as his girlfriend and decides to contact some old friends of Charles.   All of this leads to a plethora of car chases as everyone is after Charles.

The film starts out a bit slow but the pace picks up and continues to accelerate toward a hilarious ending.   Along the way, Annie learns the details of why Charlie is in the witness protection program as well as some personal information.  This puts a strain on their relationship, as they get continuously pursued and shot at.

Dax Shepard has admitted to being a fan of Smokey and the Bandit and it's influence is obvious.   Written by Sheppard, he packs the movie with plenty of automobile action, often driven in Sheppard's own cars.  He also did his own stunt driving.  Shepard's co-star and real life girlfriend Kristen Bell even loaned her own dogs for small roles.

Shepard and Bell have publicly said that they are engaged but will not get married until homosexuals can legally get married.   Their personal opinions reflect throughout the film.  Charlie makes several politically incorrect jokes, but Bell calls him on every one of them.  At one point Charlie says something is for "fags" as in "lame," not as in homophobic.  Bell lectures him that it is still derogatory.

The film also features two homosexual characters that find each other romantically.   However, the movies most memorable scene may end up being when Alex, played by Bradley Cooper, tells Charlie that he was raped in jail.  Charlie then asks if it was by a black guy, because, according to him, they see white guys as masculine women.   Charlie keeps the questions going until Alex yells, "I was butt-fucked by a Filipino dude, okay?"  Charlie continues that white guys see Asian guys as girls.

The political/social commentary never dominates the film but is clearly there none-the-less.   People do in fact talk about these issues in real life and they happen quite naturally here.  Hit and Run will entertain as it races along one breathless moment after another.  Sheppard should write more screenplays.

Dax Shephard and Kristen Bell in Hit and Run.

The political/social commentary never dominates the film because there isn't any. To call the scene where Bell is bothered by Shepard's use of the word “fag”, social commentary, is really stretching it. This is simply a comedy, with some high-octane energy.

Bell and Shepard's real life relationship works in the movie's favor as the two share a genuine and relaxed chemistry together. They are easily able to spark off each other, she with cuteness, more straitlaced personality and he with his checkered, more blue collar past.

Shepard not only wrote, starred, and did his own stunt driving. He also co-directed and was one of the producers. The cast is made up friends of his, all of whom waved their normal acting fees. Because of this, he was able to make the film for just $2 million, half of which went just for the rights of the music used. Because of this low budget, the movie was able to turn a profit despite only earning $14 million in 7 weeks of release.

I did laugh a few times during this movie, but it's more amusing than outright funny. Tom Arnold is mildly silly as the klutzy Federal Marshall. Bradley Cooper plays against his leading man good looks by wearing tacky clothing and dreadlocks. And spunky Kristen Chenoweth makes the most of her few scenes. Some of the jokes fall flatter than others, such as the hotel room full of naked people whose only humor comes from the shock value, but then is repeated a second time to less effect.

Like the cars Shepard so clearly enjoys driving, this movie goes by pretty fast. I didn't enjoy it as much as Eric seems to have, but I was mildly entertained. Certainly enough that if Shephard does put another movie together I'll probably go and see it.