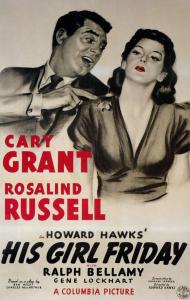 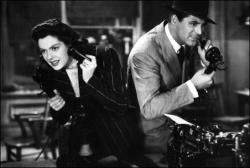 Rosalind Russell and Cary Grant in His Girl Friday.

As great as Cary Grant is in His Girl Friday Rosalind Russell somehow manages to steal the movie from him. These two banter constantly back and forth, sparring with words at a pace few others could keep up with. The crackling dialogue by Ben Hecht features some of the wittiest lines in movie history. The brilliant Howard Hawks directs with precision and passion. This one is very nearly as good as his Bringing Up Baby, missing only by a nose.

Grant is Walter Burns, editor of the Chicago Morning Post. Russell is Hildy Johnson, Walter's ex-wife and ace reporter. She returns from getting her divorce from Walter and comes to tell him that not only is she quitting the newspaper game, but that she is getting remarried the very next day to insurance salesman Bruce Baldwin (Ralph Bellamy). Of course Walter is not about to let this transpire without a fight. Through a series of escalating schemes he sets out to win Hildy back as wife and reporter.

Walter comes up with the idea of enticing Hildy by dangling a huge story about convicted killer Earl Williams in front of her face. He challenges her to get the scoop and promises to purchase a 100,000 dollar insurance policy from Bruce if she writes the story. Meanwhile he keeps coming up with underhanded ways of getting Bruce thrown into jail and basically harassed in all kinds of mean spirited ways. Walter Burns is definitely a shady character, albeit one with boatloads of charm. Hildy is a great feminist character long before the term was coined. She is openly acknowledged as the best reporter at the paper and treated as an equal by all the male reporters. You can't help but feel sorry for Ralph Bellamy's Bruce. This poor snook gets caught up in what turns out to be a twisted game of love between Walter and Hildy. From the very beginning it is clear that he doesn't stand a chance.

His Girl Friday is one of those rare movies that will bring a smile to your face no matter how many times you watch it. 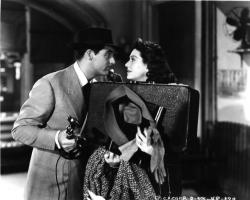 His Girl Friday is a very funny movie. It is best known for its speedy dialogue, which has been clocked in at a crackling 240 words per minute (Average conversation occurs at 120 words per minute). Like Bringing Up Baby, as Patrick mentioned, this is one of the best of the screwball comedies. And like that other Grant classic, they really don't make them like this anymore.

I disagree with Patrick when he says that Russell steals the movie from Grant. Since she's given the unfair advantage of appearing in more scenes (Grant is virtually absent from the screen for nearly 20 minutes near the end), if she does steal the movie it is only by default. In either case, while they both do a great job, the movie is at its best only when they are on screen at the same time; if for no other reason than they are the only two who can keep up with each other.

While the movie's attitude is very modern, I doubt very much it could be made today in this politically correct climate. It's modern in the sense that not only doesn't Walter want Hildy to quit her job and become a housewife; he demands that she stay working at the newspaper. I doubt though that a comedy whose central plotline concerns a man on death row and also features a suicide attempt by a girl who is shown jumping out the window and then virtually ignored by the film's protagonists could be sold in Hollywood today. If it was made it would probably star Sean Penn or Susan Sarandon and be saddled with all kinds of political commentary.

Cary Grant is hands-down my favorite old-time movie star. There really has never been another actor like him. Someone with his charm and good looks today would either be playing in dramas or action films and the closest they would ever come to comedy would be in lightweight romantic ones. The fact he threw himself headfirst into comedies of all kinds as well as taking on more dramatic roles, makes him unique and explains why he has never been matched as an actor. 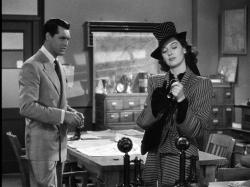 Actually Scott, His Girl Friday has all kinds of politics going on. There is an election about to take place so bribes, lies and name calling happen all the time here. Also, it was not a suicide attempt but an actual suicide. Molly does kill herself. It is a scene that truly does not belong in this comical farce.

His Girl Friday is at its best when Grant and Russell are sparring back and forth. As Patrick wrote, Russell steals the movie but it is only because she has more screen time and all of the best lines, “Walter, you're wonderful, in a loathsome sort of way.” “If I ever lay my two eyes on you again, I'm gonna walk right up to you and hammer on that monkeyed skull of yours 'til it rings like a Chinese gong!”

As Scott mentioned, they spend some twenty minutes apart. And there are a few scenes where neither one is even on screen. Add to the out of place suicide and this movie becomes less than a 4 star movie. Yes they speak a lot of lines but not enough of them are that funny. Don't get me wrong, His Girl Friday is a great old classic screwball comedy but it is hardly perfect.