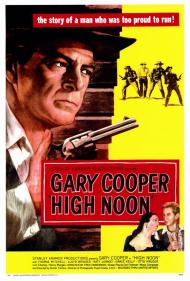 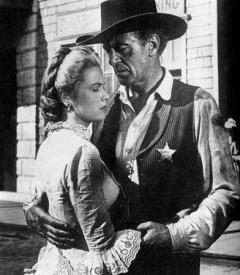 High Noon is such a well received, reviewed and remembered film that I hoped to have enjoyed it better than I did.  Do not get me wrong, this movie is very well made but the entire theme is that of a man having a very stressful morning.  I watch movies to escape my stressful day, not to be reminded of it.

The great Gary Cooper plays Marshal Will Kane on his wedding day and his last as town Marshal.  His bride, Amy, played by Grace Kelly, looks far too young for him.  Her flawless youthful complexion is in complete opposition to his weathered, craggy, saddle bag of a face.  When they share a scene together, she does not just look like his daughter, but granddaughter.  They are supposedly leaving to start a store somewhere.  Cooper looks more like he is ready to retire than start a business and family.

The film almost plays out in real time.   As Will and Amy are getting married, some cowboys arrive in town to meet a former foe of Wills at the train station, who is seeking revenge on Will.  Word reaches Will quickly that he is coming.  Will seeks help from the town but almost everyone refuses to help him.  Will quickly learns that he was not as well liked in town as he may have thought.  Amy wants him to run away with her and avoid the inevitable show down.  Will however, knows he cannot run away from his problems.

Here is the greatness of High Noon.  Will could easily run off with his beautiful young wife and have a great honeymoon and a bright future.  He even risks his marriage by refusing to leave with her right off.   Will tells her to stay in the hotel while he goes to take care of business.  She however, refuses, "I mean it! If you won't go with me now, I'll be on that train when it leaves here."

Will Kane is a man of honor.  He knows he has to stay and face a man he once put away.  It may cost him his marriage and the town does not even appreciate him, but he knows it is the right thing to do.  As Will says, "I've got to, that's the whole thing."  Will Kane is a character we do not always see in more recent Hollywood films.  Sean Penn tried to turn Christopher McCandless, who ran away from his problems, into a hero in Into the Wild (2007).   Will was a man who stood up to a situation that he helped to create.  McCandless would have ran off with Kelly without a second thought, except running a store would have likely been too much for him as well.

High Noon is a great film that earned Cooper an Academy Award and he completely deserved it.  It has been written that the script is an allegory for the black listing going on in Hollywood at the time.  Will represents a screenwriter that no one else in Hollywood is supporting.  As well made as this movie is, it is not a light piece of entertainment.  It is a four star film but it is not the kind of film I will want to watch again any time soon. 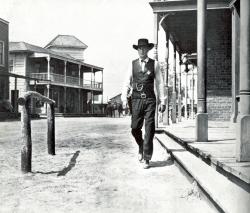 Although John Wayne accepted Gary Cooper's Best Actor Oscar when Cooper was unable to attend the ceremony and even made a joke wishing that he had been offered the part of Will Kane, in truth Wayne hated the film and had passed on it. He would say in an interview, "I'll tell you about Carl Foreman and his rotten old High Noon. Everybody says it was a great picture because Gary Cooper and Grace Kelly were in it. It's the most un-American thing I've seen in my whole life!" Howard Hawks was also not a fan and together he and Wayne made Rio Bravo as a response to the film saying that no Marshall should need to ask for help. Wayne's opinion of the film was no doubt influenced by his poor opinion of its screenwriter, former communist Carl Foreman, who had refused to name names before the House on Un-American Activities. Wayne later said that he would never regret having helped blacklist liberal screenwriter Carl Foreman from Hollywood.

Despite the Duke's belief that this film was somehow communist, it's actually quite the reverse and other conservatives would learn to appreciate it. Both Presidents Eisenhower and Reagan listed it among their favorite films and often screened it at the White House. Its message is a celebration of the individual and is about one man standing up for what's right when everyone seems against him. It's about remaining vigilant and being ever ready to defend your rights and freedoms instead of becoming complacent and taking the path of least resistance as the townsfolk do in this movie.

Wayne made entertaining Westerns, but in any of his movies were you ever concerned for his character? Will Kane though, is very human and is allowed to show his fear. His bravery comes from the fact that he is scared and we know he's scared, but he doesn't back down from the fight. He stays strong until the end, doing what must be done. As with many of Cooper's characters, he's playing the strong, silent type, but we see through the facade to the fear below. His Oscar win was undoubtedly a career win, at least in part, but this is also an Oscar worthy performance on its own.

The age difference between Cooper and Kelly is noticeable, but doesn't mar the film. Such dramatic age differences weren't uncommon (and still aren't entirely) at the time. Still, it wouldn't have hurt if the script had even one line that acknowledged the disparity. However, they don't exactly share a strong chemistry and Kelly seems rather cold and stiff. Katy Juarado, as Kane and Miller's ex-girlfriend out acts her at every turn in a part that implies things that would push the boundaries of the production code.

Eric is right that this isn't a light piece of entertainment. It's heavy in tone and there's more talking than gunfights. Its short, realtime, running time does build tension though as the clock moves inexorably to its climax. Those looking for chases and shootouts would be better served with a John Wayne western. But for those looking for something a little deeper and a movie that has something to say about what it means to be a man, then High Noon lives up to its classic status. 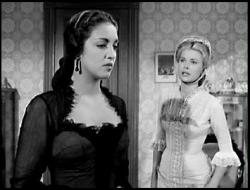 High Noon is, along with Stagecoach, probably the most iconic of all Hollywood's classic black and white westerns (and both movies feature the ubiquitous Thomas Mitchell). Gary Cooper, dressed like a bit of a dandy, cautiously walking those deserted streets (see photo in Scott's review), is an image that will forever be associated with the genre. His weather-beaten countenance amplifying the look of concern etched across his face. Add in the Oscar winning theme song "Do Not Forsake Me, Oh My Darlin'" by Dimitri Tiomkin and Ned Washington that underscores nearly every other scene and you have the makings of motion picture magic.

The age difference between Cooper and Kelly didn't bother me. People aged differently in those days. Will Kane could be anywhere between 35 and 50 and it certainly wasn't unusual for a young bride to marry a much older man. Kelly was fine in the role but I never bought her actions at the climax. Why make her a Quaker just to have her resort to violence in the end? She turns out to be courageous while poor Katy Jurado, as the bad girl, runs away when her ex comes to town.

High Noon certainly has a cynical view of small town frontier America. Nearly everyone in the town is shown to be either a coward, a crook, or completely indifferent to what's about to transpire on the sleepy streets of Hadleyville in New Mexico Territory. Of course this is the only way the script can set it up so that Marshal Kane has to face his four enemies alone but it paints a rather negative portrait of this society.

The entire movie is foreplay for what happens after that noon train pulls into town. The tension keeps building as the minutes tick by right up till the explosive finish. There's one good fistfight between Gary Cooper and Lloyd Bridges and that happens before the bad guys even show up. This poor guy's day just keeps getting worse. The final 10 minutes is the payoff. The shootout is excitingly staged and well-filmed. I love the abrupt ending with Kane and his bride riding quickly off as if to say “Thanks for nothing” to the townsfolk. A brilliant film.