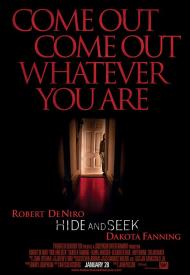 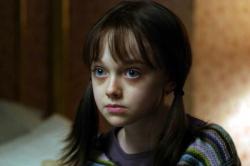 Dakota Fanning in Hide and Seek.

De Niro stars as David Calloway, a psychologist whose wife dies at the beginning of the film. In an effort to help his young daughter Emily (Fanning) cope with the loss of her mother, he moves them from their Central Park apartment, to a large country home in upstate New York. Just why a noted psychologist thinks moving his daughter to the isolation of a country house away from the comfort of surroundings she's familiar with, will help her fragile mental condition is never explored.

Shortly after their arrival in their new home, strange things start happening. Dr. Calloway attributes the odd events as his daughter acting out subconsciously in reaction to her mother's death. This is how he explains her suddenly dressing and acting as if she were related to the Adams family. And when she begins to talk and play with an imaginary friend called Charlie, her dad once again attributes it to her mental state. But as the strange occurrences become stranger and more violent, the question becomes, is it real or is it in his daughter's mind? Of course, it's impossible to tell you without spoiling the ending, but if it surprises you, then you probably weren't paying very close attention.

The predictability of the story is overcome somewhat by the quality of the cast. De Niro is as good as always and Fanning is the best child actor working today. At times she seems more like a midget than a child, or the soul of a forty year old trapped in a ten year old's body. Amy Irving has virtually a cameo appearance as the wife and mother. Famke Janssen plays a colleague and former student of Dr. Calloway who tries to help him understand what is happening to his daughter. And Elizabeth Shue plays a local woman who attempts to make friends with the doctor and his daughter. With all that talent floating around on screen, the one thing the movie never lacks is quality acting.

And as a thriller/horror movie should, this one provides a few jumps and thrills along with its mysteries, even if some of them are by the numbers horror movie standards, such as the heroine hearing a noise in the cellar and going to investigate.

Decent, but not great, Hide and Seek is a mystery that didn't make enough of an effort to hide itself. The answer is in plain sight if you look closely enough.