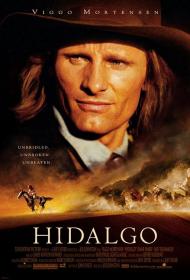 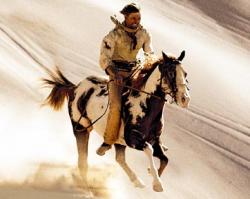 Hidalgo tells the story of Frank Hopkins (Viggo Mortenson in his first post Lord of the Rings role), a legendary horse rider who is invited to compete in a great horse race across the Arabian Desert in the 1890s. While it does manage some moments of real tension, it relies too heavily on clichés and strays too far from its central premise to be truly entertaining.

The movie gets off to a bad start when Hopkins is the dispatch rider to the Cavalry guarding the Indian camp at Wounded Knee creek. He delivers the orders that led to that famous Indian massacre and the memory of that haunts him and the audience for the rest of the movie. It's very similar to the plot device used recently in The Last Samurai only this time the hero flees to Arabia instead of Japan to escape his past.

Where the movie really gets going is at the start of the great horse race across hundreds of miles of open desert. The beautiful vistas over which the camera lingers truly need to be seen on the big screen to be appreciated. While Hopkins is atop his trusty mustang Hidalgo battling the other racers and the desert elements, the movie finds its stride. Whenever he dismounts, so does the movie.

There are too many subplots distracting us from the race itself. The Sheik sponsoring the race (Omar Sharif reliving his Lawrence of Arabia days) has a daughter who's looking for an equality with men she wouldn't find today in the Middle East, let alone over 100 years ago. British Lady Davenport is only interested in winning breeding rights of a prize stallion and is prepared to do whatever it takes to win those rights. There's bandit raids and Indiana Jones type action, all of which take the plot far away from the best part of the movie, which is the race itself.

To his credit, Viggo plays the weathered cowboy well. However, even an actor with his charm and talent is hard pressed to speak some of the dialogue that is given to him in this film. "Let 'er buck," is his trademark saying and I suppose it's meant to give the audience a thrill when he says it, but I found it more amusing than emotional. Like most good cowboys, he's better when he lets his guns, horse, or his fists do the talking.

In some ways, the movie has an old fashioned feel to it. In true old cowboy style, Hopkins never even kisses the girl, only his horse. And the epilogue reminded me of the movie Billy Jack, but not in a good way.

If the filmmakers had tightened the focus of this movie onto the race itself instead of trying to include so many plot devices, the movie would have worked. Instead, in this over two hour-long movie, the race doesn't even begin until nearly an hour into it. If they could have trimmed more, it might have worked, but as it stands, it just never pulls itself together. 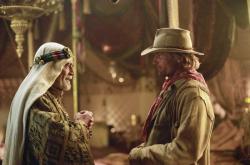 "...strays too far from its central premise to be truly entertaining." Exactly Scott. The beginning of this movie notes that this is based on Hopkins' life. However, it seems that the makers of this film didn't find it exciting enough so they added a ridiculous rescue scene and some extra villains.

This movie should have thought more about making Hopkins into an interesting character than adding action scenes. He is half European and half Indian, which he hides. He is haunted by his past, and subsequently becomes a drunk. The movie explores his Indian spirituality. Yet I never felt any connection to this character.

Viggo plays every scene with boring sincerity. Hopkins witnessed something disgusting, but can he never smile? Viggo adds nothing, other than his weathered face, to this character. Hopkins, in this film, has no discernable personality.

Considering that Viggo and the horse spend so much time together, the writers should have had Hopkins talk to Hidalgo more than he does. It would have worked as a narrative and some plot exposition. He could have told the horse some equestrian jokes or anything to add some life to this life story. Instead, the makers of this film added side plots for extra action scenes. However, action scenes without a great character to root for are tensionless and thus pointless. 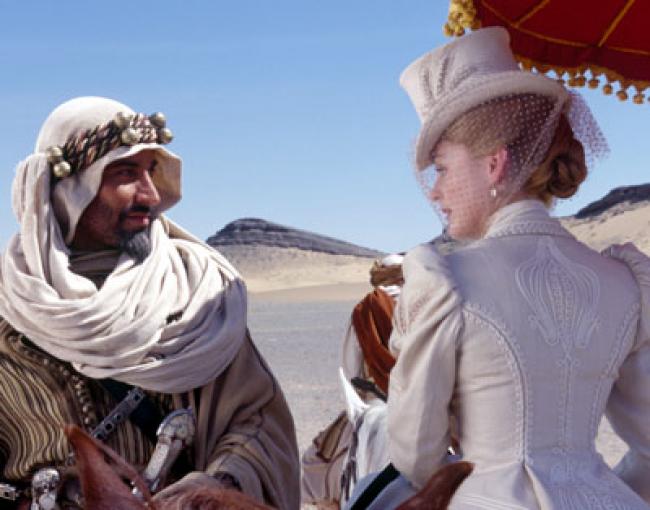 Sure it runs too long and includes extraneous subplots but for the most part I still managed to enjoy this movie. As Scott noted, it has an old fashioned feel to it, especially in regards to the swashbuckling elements of the story. Even though Frank Hopkins was a real person, his exploits have never been verified. Therefore to all intents and purposes Hidalgo tells a fictional story about a race that never took place. I agree that the highlights of the movie are the scenes set during the race itself.

Viggo Mortensen is good as the laconic horseman Frank Hopkins. My only complaint about his performance is that I wish he had played it bigger. In fact the entire movie needed a more lighthearted feel. This is a colorful, romanticized version of history with one-dimensional villains and an outcome that is never in doubt. Scott mentioned Indiana Jones, and the part of Frank Hopkins would have been perfect for a young Harrison Ford. He could have brought a light comedic touch to lines like, “Nobody hurts my horse.” that Mortensen's delivery lacks.

The action scenes are excitingly filmed. The open desert vistas are indeed gorgeous to look at. I also see Eric's point about the lack of character development. The script takes itself too seriously when this isn't that kind of movie. We don't expect character development in our action heroes. Frank Hopkins is the very definition of the mythical cowboy/halfbreed. What more do we need to know about him?

Hidalgo is nearly a great movie. It's just too bad they cluttered up the story. If they had focused solely on the race itself, ditched a few supporting characters, and had Mortensen play everything bigger, Hidalgo could have been a Saturday matinee classic. Instead it's just a mildly amusing and often frustrating, bloated epic with gorgeous cinematography.