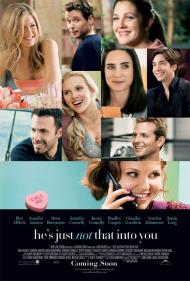 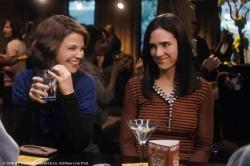 Ginnifer Goodwin and Jennifer Connelly in He's Just Not That Into You.

He's Just Not That Into You is a series of loosely connected love stories blended together. Some of the stories are interesting and some are entertaining, but none of them really reach out and grab you. The overall feeling it leaves you with is one of bleh; been there and seen that many, many times.

The most impressive thing about the movie is its cast. I can't remember the last movie I saw with so many stars in it. I mean what kind of movie has Jennifer Aniston, Scarlett Johannson, Jennifer Connelly and Drew Barrymore? The male cast isn't nearly as famous, but does feature Ben Affleck and Justin Long amongst other less well known actors. Although they never all appear together in one scene, there are several scenes with varying combinations of them. Of them all, Drew Barrymore's part is the smallest and the least connected from the other stories and also the least effective. It's nothing against her, it's just the material is rather weak.

Despite all the big names, it is Ginnifer Goodwin as Gigi who could most arguably be called the lead. Gigi is one of those girls who obsesses over guys and their habits and her lack of luck with them. She becomes friends with Alex (Long), who becomes her guy guru when he explains to her that it's really quite simple; if he's not calling you, it's not because he's been out of town or lost your number. "He's really just not that into you." Of course if you've ever seen a single romantic comedy than you can probably guess what's going to happen between Gigi and her new guy friend.

Aniston and Connelly both play women who work in the same office as Gigi. Aniston's character has been in a serious relationship for seven years, but her boyfriend (Affleck) won't propose marriage to her. Connelly is married, but her husband is cheating on her with a hot yoga instructor played by Scarlett Johansson. Johansson also has a guy friend who has a crush on her and that guy is Alex's roommate and he in turn advertises with a company where Drew Barrymore works.

You certainly can't fault the acting ability and charisma of most of the cast. It's just too bad that the writing is so mediocre. Any one of the storylines could have appeared in an episode of Sex and the City only on there it would have been funnier and probably more insightful. While none of the characters are given any real depth, the women are given much more than the men, as seems usual in romantic comedies these days. Unlike When Harry Met Sally, a movie this one tries to imitate with it's conversations to camera in-between scenes, equal time isn't given to both sides of the stories. Although you can't really say that the women come off much better since all of them are only interested in men, and any other side they might have is left blank.

Although its title suggests that this movie might break some romantic-comedy cliches, it's actually crammed full of cliches and characters we've seen hundreds of times. It goes to pains to say that the type of things you see in romantic comedies are the exceptions and not the rule and that you shouldn't expect a movie type ending to every relationship you're in, but then the end of the movie is the exact opposite. So not only isn't this a very good movie, but it's also a contradictory one.

The next time someone brings together a cast this big, let's hope they also bring at least one talented writer, with something original to say, along with them.

For the most part this movie says young women are stupid when it comes to love. Gigi is ignorantly obsessive. Anna has an affair with a married man. Mary is too impatient. They worry about the details while the guys are just trying to have fun.

Neil and Beth are easily the most sympathetic couple, and star the two best actors of the movie. They live together and love each other, but one day Beth decides she wants to be married. "I just need you to stop being nice to me unless your gonna marry me." Neil gives the old bullshit speech about how he does not need a paper or societies approval to demonstrate their love and commitment for each other. I see couples who live together like people who lease cars instead of buying. They don’t want the commitment of owning a car because of all the up keep and maintenance involved, and besides, a hot new model might be coming along soon and then they would have to go to all of the trouble of selling the old car instead of just returning it for a new one.

The only other one I liked was Conor. Here is a guy hopelessly in love with a girl who clearly has him trapped in friendship land. There is no way he will ever be with her romantically, but he is still holding out for her. Truth is, if they ever got together it would never last. The best he could hope for would be to get a rebound lay. Since it is Scarlett Johansson, that may very well be worth the wait.

I recall when the book,"He's Just Not That Into You: The No-Excuses Truth to Understanding Guys" came out. Oprah had the authors on and women were acting as if it was some kind of amazing revelation, for a guy to say that if a man avoids a woman he obviously does not want to see her. Duh! What is so enlightening about that? Are young women really that dumb when it comes to men?