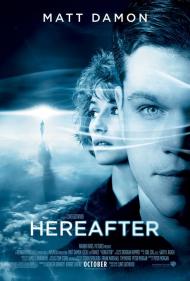 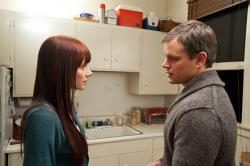 A movie about the afterlife could go in many different directions.  It could deal with religion of any kind or it could focus on denial.  It could try to make a definitive statement or it could leave you asking questions.  Eastwood's Hereafter, does none of those of things, and you could accuse him of taking the easy way out by playing it very safe and as non-offensive as possible.  What he does do is what all of the best Eastwood films do, and that is make an entertaining character driven film.

Perhaps it's because Eastwood is also an actor that his movies do always put the focus on the characters.  He knows that it isn't the special effects, the action or the locations that are the most important part of any movie because if you don't care about the characters, none of that other stuff really matters.  Without well written parts and actors capable of delivering solid, believable performances in those parts, nothing else matters.

Hereafter gives us three solid such performances by three different actors.  Cecile De France plays a French journalist who has a near death experience when she nearly drowns during a tsunami.  Twins George and Frankie McLaren play twins Marcus and Jason.  Marcus is devastated by the death of his twin brother Jason.  And finally Matt Damon plays George Lonegan, a psychic with the genuine ability to speak with the dead.

The plot shows each of them dealing with their own unique problems.  Marie, the journalist, believes that she caught a glimpse of the afterlife while she was "dead" and begins to do research into the subject of near death experiences to the detriment of her career.  Marcus too becomes obsessed with death following Jason's death and begins to research ways of communicating with his dead brother.  George has the opposite problem.  He wants to avoid death and has given up his career as a psychic and taken a factory job in an attempt to get away from his old life.  All of their stories eventually collide in London near the end of the story.

Although the characters ask deep questions and George actually has the ability to speak to the dead, no answers are ever given.  God and religion barely get a mention.  Eastwood and screenwriter Peter Morgan don't provide an opinion on what they think happens after death and this does lessen the impact of the story.  What's left feels like soap opera.  Very well done, interesting and entertaining, finely acted, written and directed soap opera, but soap opera nonetheless.

The pacing of the film is measured.  There are a couple of action scenes, but this is human drama above all else.  The showiest scene is the tsunami, which takes place in the first five minutes.  I was never bored, but since the previews give more time to the tsunami and London Underground bombing than they deserve in comparison to how much time they actually take up in the story, I felt I should point this out.

Like nearly all of Eastwood's films, there is plenty to enjoy here.  A finely drawn human drama, it just fails to go far enough with the supernatural elements. 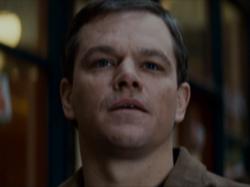 At  over two hours, Eastwood drags this story out.  It is simply three characters dealing with death, and their eventual meeting.  As Scott wrote, it implies very little and offers no conclusions, so it all is a bit pointless.

The character of Melanie simply exists within the story to demonstrate how George cannot connect with other people.  It could have been covered much quicker than it is.  Likewise with George's brother Billy.  The plot line with both Melanie and Billy simply serve to show how George is dysfunctional, but ultimately serve little purpose to the out come of the movie.

George cannot deal with his ability.  This causes him to keep friends at bay.  He does not shake hands, as that causes an unwanted psychic connection.  The film never goes there, but I assume George is a middle aged virgin, as he so desperately avoids human contact.

The rub, is that Howard does a great job of acting.  I loved the scene where she is blinded, tasting food.  It really demonstrates how sexy lips can be.  She is nice to watch, but a little dialogue between Billy and George explaining how he is afraid to fall in love because of his ability, could have cut plenty of time from the film without losing any exposition.

Eastwood tries for too much poetry.  George constantly listens to appropriate Charles Dickens recordings.  Just after arriving home from the Tsunami, Marie takes a bath.  The irony that she just nearly drowned in water, but now finds comfort in it.  Marcus's story line is likewise padded.  He visits several physics.  All but the first visit should have been cut.

The ending was nice enough, but once everyone gets to London, it should have changed pace.  Why make us wait for George to do a reading for Marcus when we know from the character introductions that it will happen?   The ambiguous ending with George and Marie is likewise frustrating.  The film spends so much time on a doomed relationship, but only mere seconds on the one that maybe worthwhile.    Hereafter has some interesting characters but the focus is way off.