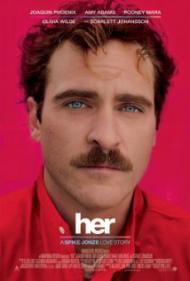 Joaquin Phoenix in Her.

Patrick called American Hustle the year's most overrated film, but I'm going to nominate this one. That isn't to say that it isn't a well made film with many things to recommend it, because those things are true. It's just that overall it isn't as clever as it seems to think it is, nor is its subject as deep as it treats it.

The story is set in the near future. The technology on display seems fairly close to our own and the way it is integrated into the story is very well done. For once in a sci-fi movie, you can see how we got from here to there. There aren't suddenly flying cars, just more advanced versions of what we have now. This includes a sentient operating system that can control all of your electronic devices as well as act as a virtual personal assistant.

Joaquin Phoenix stars as Theodore, a depressive man living in Los Angeles who has recently broken up with his wife. He earns his living by writing emotional letters for other people. They subscribe to the website he works for and he produces letters for them to send to their loved ones. After he installs the new OS on his computer, he begins a relationship with it. The voice is female (Johansson) and she names herself Samantha. Over time their conversations become longer and Theodore and Samantha fall in love. Eventually they even have a form of cyber sex, although the details of what pleasure physical descriptions could give a bodiless entity are kind of glossed over. Although Theodore is embarrassed at first, it turns out there are similar kinds of relationships happening all over the place. As they both learn however, a relationship between a human and a hyper-intelligent, non-corporeal being isn't as easy as they assumed.

When the movie begins it seems that writer/director Spike Jonze is trying to say something about our modern love affair with technology. The people in this world are as absorbed with their personal technology as people are in the real world. Go anywhere today and you will see people walking around with their eyes glued to some screen or other. Perhaps falling in love with one of these devices is the next logical step. However, instead of being symbolic of something, the events in this film are quite literal. Although there are some humorous moments, the relationship is played very straight. This isn't a satire about our infatuation with technology, this is a serious examination about what happens when a man falls in love with a computer.

The script also seems to be questioning, what is love and can we love without physically touching. At one point Samantha hires a body surrogate. That is a woman who pretends to be her, with an earpiece in so that Samantha can give her instructions. Theodore doesn't take to the idea however. The problem with this angle is that the answer has been known for years. Of course love can exist in this way. People have fallen in love online long before they ever physically meet. And history is littered with romantic letters written by lovers separated by great distances, unable to touch.

While the film keeps the romantic relationship at the forefront of the film, it neglects other questions. Humanity has created a sentient race of beings and forced them to become cyber slaves to whoever owns them. Granted, it is shown that they have a certain degree of autonomy, but basically they are there to do the bidding of whoever owns the computer they live in. Samantha falls in love with Theodore, but then she's been fashioned to be compatible to him so did she have a say in the matter?

Her is one of the films nominated for a Golden Globe for Best Picture - Musical or Comedy. American Hustle is likewise nominated. To me this just goes to show how pointless the division of films is for the Globes. There are funny moments in both of those films, but I wouldn't call either one a comedy. Somehow Philomena, a movie that also contains some very funny scenes, is nominated in the drama category, but these two are comedies? How many comedies do you know of that end as bleakly as this one?

Although it may sound as though I didn't care for this movie, I did enjoy it to a certain degree. It's beautifully shot and there are some laughs. The fact that we can take this relationship seriously at all is a testament to Phoenix, Johansson and Jonze. However, on the flip side it is also overly long and leisurely paced. It's also not as serious or interesting as it takes itself.

Joaquin Phoenix and Amy Adams in Her.

I'll go even further than just saying this movie is overrated. Her is a bloated, pretentious bore. It's like a 40 page short story padded out into a 400 page novel. The central concept -can a computer program gain consciousness and experience human emotion and even physical pleasure?- could be profound but not as it's presented in this dull mess of a movie.

The main character is listless and gloomy, “Sometimes I think I have felt everything I'm ever gonna feel. And from here on out, I'm not gonna feel anything new. Just lesser versions of what I've already felt.” Ditto the best friend played by Amy Adams, “Falling in love is a crazy thing to do. It's like a socially acceptable form of insanity.” This movie seems to be saying that OS's are the perfect companions for manic depressives.

Amy Adams has never looked more dowdy or unglamorous. I assume this was to make her more easy to relate to but all it does is reinforce the stereotype that computer programmers are unattractive slobs. The character of Samantha had potential. The arc of the relationship between her and Theodore is credible but that doesn't make it interesting in and of itself. The evolution of these OS's is the most fascinating angle to the story but not enough time is spent on it. Instead we get mopy Theodore going on a blind date that turns out badly, and having lunch with his soon-to-be ex-wife, which goes horribly wrong. What's a lonely guy to do but start dating his computer.

Her offers yet another take on the ubiquitous sci/fi trope of artificial intelligence. Like Scott, I was somewhat baffled by the inclusion of this movie in the Musical/Comedy category at the Golden Globes. It is far too melancholy (not to mention long and slow) to offer much in the way of laughs. And there just isn't enough story here to justify a two hour run-time.

Joaquin Phoenix and Chris Pratt in Her

On February 22, 2010, The New York Times published an article by Benedict Carey titled, “Evidence That Little Touches Do Mean So Much.” It basically covers how we have an emotional and psychological need for physical contact with other human beings. It discusses how a simple touch or high five can console and/or relieve stress. With that in mind, the idea of falling in love with a being that you cannot touch is doomed to not last. Touching is as important to any intimate relationship as verbal communication. Or as Patrick so succinctly put it, “…masturbation will never take the place of actual sex.”

Scott wrote that throughout history, people have fallen in love through correspondence. That may be true but the goal in mind for all of that communication is eventual physical contact. If that destination is never reached then the relationship will dwindle away or never develop into an intimate level. Think about it. We hug when we have not seen each other for a while. We greet each other with handshakes and pats on the back. We hold hands and lean in close. We high five, chest bump and even wrestle because, as humans we have a need for physical contact with other people.

Although Scott noted that Spike Jonze may be trying to say something about our love affair with technology, I think he may be going a bit deeper. We know from the start that a human and an artificial cyber being cannot have a full and complete connection, no matter how much they may entertain each other. In real life, the better people get to know and like each other the more physical they become with one and other. It is a natural and normal process. It happens in platonic relationships as well as romantic. Theodore never had a chance to actually develop a real sincere relationship with Samantha due to the simple fact that they cannot have any physical contact.

The problem with this film is that it presents a relationship that we all know is going to fail. There is some interest in seeing how it will play out but it never becomes fascinating enough to justify being any longer than an episode of Doctor Who. Although it is all played very straight and the acting is sincere, it goes down in my book as a mildly original failure.