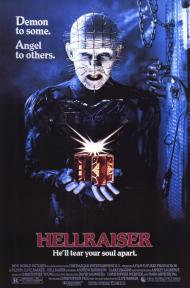 Three Movie Buffs prides itself on the large and diverse selection of movies we've reviewed since our inception on June 2, 2000. As of this writing, we are quickly approaching our 3,000th movie. Not bad for three guys who all work separate full-time jobs to pay the bills. We've reviewed movies dating all the way back to the dawn of the silent era, as well as many foreign language films, and movies from just about every imaginable genre. However, if one were to peruse this site at length one would begin to see a noticeable lack of many famous horror films. I think it's fair to say that none of us consider it a favorite genre. In particular we have yet to review many modern horror classics made during the 1970s and 1980s.

Hellraiser is one such movie. It was based on the novella The Hellbound Heart by openly gay British writer Clive Barker. A neophyte filmmaker, he wrote the screenplay and directed this movie himself. It would lead to a hugely successful horror franchise that to date has seen 9 feature films as well as a successful comic book series. The most recent movie, Hellraiser: Revelations was released in 2011. Unfortunately, due to the shortsighted decision by Barker to sell the rights before this movie even hit theaters, he has had nothing to do with any of the subsequent sequels.

The plot is twisted. It begins with a man buying a mysterious puzzle box from an antique dealer in Morocco. The man, Frank Cotton, returns to his house in London and solves the box's puzzle in his attic. Instantly chains with hooks appear and pierce his flesh (see photo). Inner-dimensional demons (called Cenobites) appear and tear his body to pieces. They take his physical remains back to their alternate plane of existence.

Frank's brother Larry and his wife Julia (who once had an affair with Frank, the black sheep of the family) move into Frank's house, thinking him most likely in jail in some far off land. When Larry cuts his hand on a nail, his blood seeps into the wooden floorboards where the Cenobites attacked Frank and this blood somehow causes Frank's flesh to begin to rejuvenate. Soon he has regained a human form but without any skin covering his muscles. Julia learns of his presence and Frank convinces her to bring him human victims on which he can feed to fully restore his physical form. Then the two of them can run off together. From here the movie gets weird.

Clive Barker created one of the most iconic horror characters of the last 30 years with the Lead Cenobite, later to be famously nicknamed Pinhead, (a name Barker dislikes and one he never used for the character) because his face and head are covered with what look like acupuncture pins. He is joined by three equally disgusting looking fellow Cenobites. One has a huge mouth with sharp snapping teeth, one resembles Jabba the Hut with sunglasses, and a female one has her throat ripped open like she just had a tracheotomy.

Barker also wrote some memorable dialogue. The hedonistic Frank explains why he opened the box in the first place by saying, “I thought I'd gone to the limits. I hadn't. The Cenobites gave me an experience beyond limits... pain and pleasure, indivisible.” That's the name of the game these Cenobites play. The details are left to the imagination but clearly it's some extremely intense sadomasochistic kinky shit. When a character asks the Cenobites who they are, Pinhead answers, “Explorers in the further regions of experience. Demons to some. Angels to others.” Pinhead's signature line comes later. It has been sampled by numerous hardcore metal bands over the years. “We'll tear your soul apart!”

Although in the sequels Pinhead gets in touch with his compassionate human side, in this original movie he shows no mercy. He and his fellow Cenobites torture with a cold, calculating, almost-scientific-like attitude. All of which makes them that much sicker.

Sure some of the special effects haven't aged well, but that's understandable when you consider the entire movie was shot for just a million bucks. Despite the obviously fake look of one of the monsters, Hellraiser remains a seriously disturbing, and very original, horror flick.

We have such sights to show you!

I had never before seen Hellraiser but I was long aware of the character Pinhead. As Patrick wrote, he is quite the iconic monster. I also agree that the special effects are sometimes flawed, such as the rubber skin, but after all these years, Hellraiser is still very much disturbing. My twenty year old son watched some of this movie with me while working on his college homework. His comment to me about the fleshless Frank was, “That is really gross, Dad.”

The most impressive aspect of this movie is the imagery. The chains with hooks seeming to come out of nowhere are scarily affective. Out of the darkness they shoot at you, rip into your flesh and hold you captive for the demons to do as they wish, and these are some seemingly seriously sadistic demons.

Although made on the cheap, Hellraiser still works. Almost the entire film takes place in one location and it is all it needs. The house is creepy with its multi leveled staircase that seems to come into play every other scene. Then there is the creepy attic room with the unfinished hard wood floor and the paper covered windows, not to mention the growing collection of decomposing bodies.

As incredibly gory and horrifically shocking as this movie is, it is not without some flaws. I was left with many questions. When Kirsty uses the puzzle cube and summons Pinhead, how does she know to serve up Frank as a deal to save her life? Why does Kirsty not question the blood and ooze on the side of her dad’s face near the end? Why does the hospital lock her in her room? Why is a chair still burning after the house it was in is nothing but ashes?

Imperfect as it all may be, it is still fairly easy to understand why there were several sequels made. Pinhead is only in a few scenes, teasing us as to what he is and what he is capable of doing. His appearance is cold, disarming and nightmare inducing. For horror film fans he is the man, or should I write, he is de-mon.