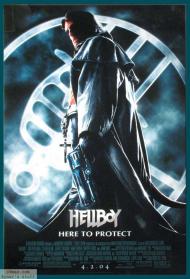 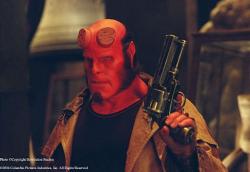 The two most important elements of any Sci-Fi/Fantasy movie are good dialogue and actors who can sell the most outlandish situations. Unfortunately, most of these types of movies focus instead on special effects and huge set pieces. Hellboy is definitely of the latter persuasion. Its director/writer, Guillermo del Toro (Blade II), has a great visual eye, but writes very awkward dialogue. The end result is a mixed bag of a movie.

Once again those pesky Nazis get the plot of a movie going. In this case, near the end of World War II Hitler recruited Rasputin (yes, the Russian Rasputin who caused so much trouble for the Romanovs) to open a portal to outer space where the gods of Chaos are sleeping. While he is successful, the ceremony is interrupted by the US Marines, with British Occult expert Professor Broom along as an advisor, who bust in and blow up the portal, but not before a baby demon-like creature, whom the Marines nickname Hellboy, comes through it.

Flash-forward to the present day and we find Hellboy working for the US government in a secret organization known as The Bureau for Paranormal Research and Defense, which is headed by a now quite old Professor Broom. Here Hellboy works alongside a telepathic Mer-man, and the love of his life, a woman with pyro-kinetic powers. Together they fight a secret battle against the forces of evil, or as Professor Broom puts it, "There are things that go bump in the night. We're the ones who bump back." Inevitably Rasputin returns with plans to destroy the world, and naturally its up to Hellboy and Co. to stop him.

The movie contains a distinct and attractive visual style. The makeup on Ron Perlman as Hellboy is quite good, although the coolest looking visual effect is the flame on Selma Blair. The CGI effects, of which there are many, are also quite good, but they've yet to reach the point where you'd ever mistake them for real. This isn't the fault of the movie, just the state of CGI.

Where this movie works best is in the action sequences and the lighter moments. At one point Hellboy's girlfriend goes for coffee with an FBI agent that Hellboy thinks has a crush on her. He follows them as subtly as a two-ton demon can, and ends up sharing a humorous moment with a young boy he meets on a rooftop as he spies on the couple below on a bench.

Too often however, the movie moves into melodrama. Whenever something dramatic happens, the music swells unbearably and the dialogue becomes quite cheesy. There's a 'romantic' exchange near the end of the film that is groan inducing. If del Toro wanted this movie to have dramatic overtones he should have hired someone to write dialogue that sounds like lines people would actually say.

Fans of the Hellboy comic books might enjoy seeing favorite characters and situations brought to life, but the movie is just too uneven to be anything but sporadically enjoyable by anyone else. 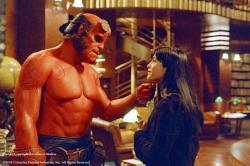 Hellboy could work if it maintained a consistent tone. Murder and death happen all the time in this movie but the lighter moments, such as the talking corpse, destroy much of the tension. Hellboy is apparently invulnerable so all that you get from his fight scenes are humor. "This is gonna hurt." He says just before being swallowed by a large monster and blown up.

The romance is also uneven. Hellboy is in love with Liz. Is Liz in love with Hellboy or is she just playing hard to get? She is as friendly to John as she is to Hellboy. As Scott wrote, the writing is hardly perfect.

The best thing about this movie is the character of Hellboy. He is unafraid of monsters of any size, yet he is scared to confess his feelings to the woman he loves. He acts tough and rough yet has affection for cats. Hellboy deserves to be in a better script.

I knew this movie was in trouble by one of the first scenes. It is 1944, and a bunch of Nazis have snuck into Scotland to open a dimension door. Of course, they don't want to be discovered; yet, they take the time to hang up several huge, two-story banners that have swastikas on them? 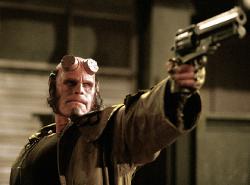 Hellboy is an interesting and entertaining lead character (thankfully they got a better script and a more consistent comedic tone for the sequel), which I had seen before watching this original installment in the franchise. The melodramatic touches don’t work in this movie and they must have realized that because they’re missing from Hellboy II.

So the script leaves a bit to be desired. I still enjoyed the movie, due mostly to the character of Hellboy and the droll performance by Ron Perlman. What del Toro lacks as a writer of dialogue he more than makes up for with his visual flair and atmosphere. The movie is beautiful to look at, filled with colorful images and bizarre creatures. Somehow they make you care about a large, red, horned, demon and a mer-man named Abe Sapien (he was discovered the day Abraham Lincoln was shot).

Hellboy may be nearly indestructible but since he still feels pain the brutal action scenes have a real tension. He is a bad-ass. At times he looks like a film noir demon prowling the city streets at night in his trench coat and at others he is sort of like a Bizarro World Arnold Schwarzenegger action hero from the 80s. As Eric mentioned he also has a softer, romantic side.

With the prevalence of CGI in today’s cinema it is nice to see actual make-up being used so creatively. The make-up for both Hellboy and Abe took four hours to apply each day before filming could begin. The result was clearly worth the effort as both characters have a realistic look that you just couldn’t achieve with computer effects alone.

Despite some inappropriate melodrama, this movie does have its share of laughs. Hellboy asking a monster, “Didn’t I kill you already?” or Abe with his Rubik’s Cube, “Listen, I'm not much of a problem solver. Three decades... and I've only completed two sides.”

Hellboy isn’t great but it does a good job of introducing the memorable title character. Hellboy II is a better movie. Come to think of it that movie is yet another example of a sequel surpassing the original. Perhaps that isn’t as rare as is commonly thought. 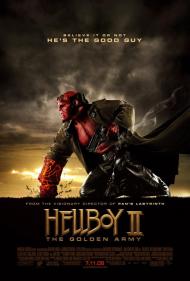