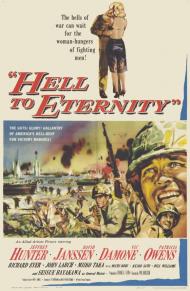 George Takei and Jeffrey Hunter. From Hell to Eternity to Star Trek alumni.

The story of Guy Gabaldon is just ripe for the telling, and Hollywood should sincerely consider re-making his story into a new movie. Guy's story is unique in that he was a minority who was raised by another minority group. Here is a boy with different ethnic influences who grew up to be an American hero.

Guy Gabaldon was a Hispanic boy growing up in a dysfunctional Los Angeles home in the 1930s. According to the movie, his best friend George was a Japanese boy whose brother was a coach at their school. The film is vague on how it all comes to pass, but Guy ends up moving in with them and the coach's parents. The two generations of Japanese-Americans became Guy's foster family. He was particularly close to the mother, who taught him how to speak Japanese.

When World War II started, his new family was sent away to an internment camp. Guy gets drafted when he comes of age. His ability to speak Japanese quickly makes him a valuable asset. A large portion of the film features the deadly battle and capture of Saipan. When he and another marine are hiding near some Japanese, he is able to translate their plans. His big moment comes when he faces down a Japanese General who ends up killing himself in front of 800 Japanese soldiers. Guy then convinces them all to surrender.

Hell to Eternity plays out in three acts. The first is his youth, being raised with the Japanese family. The third and longest is the realistic, action packed fighting in the war. The second act is shortest, but also the most out of place.

Guy and two other GI's spend their last day of liberty getting drunk and trying to get laid. Their search for a good time ends in a room with a cold Japanese matriarch, a Japanese stripper with all the right curves, and an uptight American girl in uniform. The stripper gives them a show while the men hoot and holler. Once the American girl gets drunk enough she decides to do the same, causing much more lascivious reactions from the soldiers.

It is an interesting scene and the girls look good in it. It was highly censored as you see more of the guy's reaction than you do the women in their underwear. It is a decent scene but it should have been cut. It has nothing to do with the rest of the story of a bilingual minority becoming a national hero. The film runs over two hours long and ends on the battlefield. Although at one point he gets a letter from his foster mother, it would have been nice to see a reunion between them. It would not have been as titillating as the stripper scene, but it would have made better sense plot wise.

As a six foot Caucasian with matinee idol good looks, Hunter was not the most realistic casting choice. He was a fine enough actor but he did not resemble the short, average looking Guy Gabaldon. Hunter was the same age as Gabaldon, but he filmed his scenes 15-20 years too late. With all the young male Hispanic actors in Hollywood today, I am sure they could find a better match to play the highly decorated Gabaldon, if they ever re-make this film.

There's something ironic about a movie making a statement about racism that features a Caucasian actor playing the part of a Mexican-American. Apparently the studio felt confident that audiences would accept the moral lessons, but not if they were delivered by an actor of color. This change of heritage doesn't affect the movie taken on its own, but given that it's based on a true story and the life of a true war hero, it seems a shame not to portray him more accurately. And of course, as Eric noted, the 6 foot tall, handsome Hunter looks nothing like the 5 foot, average looking Gabaldon. Eric mentioned the age difference as well, which also reduces Gabaldon's achievement. In real life he was just 17 when he joined the Marines. This means he accomplished his heroics while still a teenager, making them all the more remarkable.

What happened in 1960, to answer Eric's question, is the culmination of the previous decade's decline of the Hollywood Production Code. The advent of television and import of more daring European films prompted the studios to start pushing the envelope of acceptable behavior. A boycott by the National Legion of Decency no longer had the power to affect box office to any great degree. 1959's Some Like it Hot was one of the big nails in the Code's coffin. It couldn't get a certificate of approval so it was released without one and became a smash hit. Thus by 1960 Hell to Eternity was able to show more graphic violence, blood, and the provocative striptease scene that Eric mentioned.

However, just because you can do a thing doesn't mean that you should. As Eric wrote, the striptease party feels out of place. It feels as if it were included just to get a little bit of sex into the story. And it's clear that actual sex is on the cards. Hunter and Patricia Owens leave the party, her in just a skirt and bra, and when we next see them Hunter's shirt is unbuttoned. More tellingly, when the two of the them sneak off to the bedroom, the scene cuts to a shot inside the barrel of a gun and the camera acts like a bullet, moving up the barrel and ejaculating out of it. This shot is followed by a barrage of gun's firing. You don't have to be Fellini to see the symbolism there.

Although the script shows the unfair treatment of Japanese-Americans during the war, it tempers its criticism somewhat by having Gabaldon's adopted family accept their fate so stoically. They are very forgiving of the government. At one point, one of them says, "No one can bat a thousand all the time." in reference to the government. Their attitude seems to be that the government meant well by their actions even if they got it slightly wrong. I wonder what George Takei thought of his lines since in real life his family was interned for the duration.

In another sign of the changing times, we aren't just shown some gung-ho action, but also the consequences of the action. We see plenty of blood and in one effective scene we are shown the carnage of a battlefield as the camera pans slowly and in silence across the dead bodies that litter the ground in plentiful numbers. It does take an hour to get to that action and like Eric, I thought they should have cut the striptease scene in order to not only get to the action sooner, but also to allow a scene at the end that, as Eric suggested, could pay off the setup of the family life depicted in the first act.

I agree with Eric that the story of Gabaldon's life is ripe for remaking and this time with a more appropriate starring actor. This version has its merits, but Gabaldon deserves a more accurate representation of his life story. 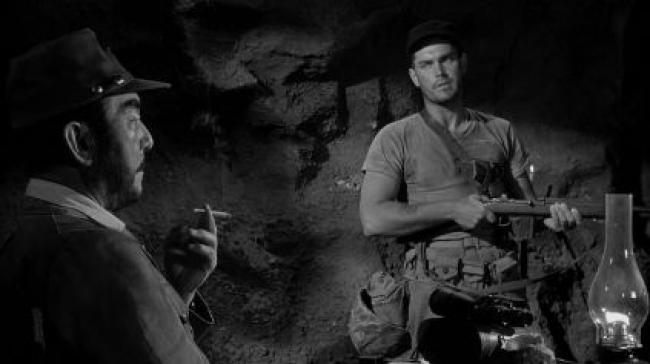 Sessue Hayakawa and Jeffrey Hunter in Hell to Eternity.

They cast a tall preppy-looking white guy to play a short Mexican/American from the mean streets of East L.A. I'll bet this decision didn't surprise Guy Gabaldon a bit. He had certainly experienced bigotry in his life before then. This man single-handedly captured more than ten times the number of enemy soldiers taken by the legendary Sergeant Alvin York during the first world war. Yet, unlike Sgt. York, Guy Gabaldon was not awarded the Medal of Honor but was given a Silver Star Medal instead. A very prestigious honor to be sure but you have to wonder if his ethnicity played a part in that decision, just as it apparently did in the casting of the actor to play the Pied Piper of Saipan (as Gabaldon was famously nicknamed) on screen.

Hunter's not terrible, and remember this was the age when leading men had to fit a certain mold, but he is wrong for the part. On the plus side, he looks heroic and he was a decent enough actor that he really makes you feel for this guy. The story has a strong emotional arc and Hunter handles the drama and the action with cool professionalism. The supporting actors each get to shine in a scene or two but this really is a one man show and Hunter is in nearly every scene.

Scott mentioned that the Japanese commander, General Matsui, was played by the legendary actor Sessue Hayakawa, who had been making movies since the silent era. What my brother didn't mention was that Tsuru Aoki, who plays Mother Une, had been married to Hayakawa since 1914. They had first shared the silver screen together more than 45 years earlier back at the dawn of Hollywood. Mother Une's relationship with Guy is at the heart of the movie and I agree that a reunion scene would have made for a more emotionally satisfying conclusion. This was Tsuru Aoki's final movie role. She passed away in 1961 at the age of 69.

I didn't really mind the striptease scene although I agree with Eric and Scott in the sense that it's gratuitous filler that doesn't advance the plot and goes on longer than it needed to. It does provide Patricia Owens with a wow moment that she makes the most of. Sheila Lincoln is called the “Iron Petticoat” by all the men who have tried and failed to breach her defenses. Once she lets her hair down, both literally and figuratively, she becomes a totally different woman. She goes from Ninotchka to Brigitte Bardot in one fell swoop.

I thought the movie's biggest problem was the fact that Guy Gabaldon spoke fluent Japanese while it's painfully obvious that Jeffrey Hunter did not. He repeats a few brief phrases in the language but never carries on any extended conversations. Normally this wouldn't be such a big deal but his fluency in the language was the main tool/weapon Gabaldon employed to capture enemy combatants. According to Gabaldon himself, it was his knowledge of backstreet Japanese that made him such a successful soldier. His years spent with his adopted family taught him Japanese slang, customs and folklore that you couldn't get in a classroom alone. This lent his voice authenticity and influence to go along with his courage and maturity.

The battle scenes are fairly well filmed. This isn't exactly The Longest Day but then they weren't going for that type of scope. Hell to Eternity is a personal film with a universal message. It tells one man's story and it's a damn good story. Guy Gabaldon was a product of the Great Melting Pot and his incredible life reflects the unique brilliance of America at its best. This movie is solidly entertaining but Guy -like Louis Zamperini- is deserving of a better movie. If they ever do a remake, hiring an Hispanic actor who actually speaks Japanese would be a great place to start. 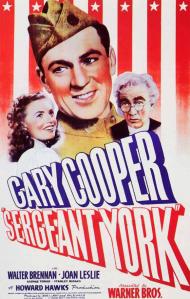