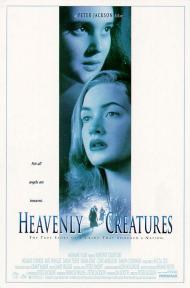 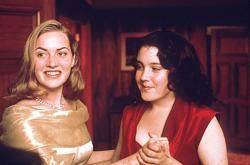 Heavenly Creatures tells the true story of the notorious Parker-Hulme murder case that shocked New Zealand in the summer of 1954. The case involved the brutal murder of Honorah Parker by her teenaged daughter Pauline Parker and Pauline's best friend/lesbian lover, Juliet Hulme. Rather than focus on the sensational trial and aftermath, director Peter Jackson instead tells the story of how these girls met and began an obsessive relationship that included an elaborate fantasy life that would eventually lead to murder.

The movie begins with the two girls covered in blood and screaming for help as they approach a tea shop. The story then flashes back to how they met two years earlier. Juliet (Winslet) is a new girl at school. She and Pauline (Lynskey) quickly bond and soon become inseparable. They begin to develop their own alternate fantasy world that they call “The Fourth World”, which is basically heaven only without the Christians. It is instead a place where art and music are celebrated above all else. In this world certain singers and movie stars are like saints. They love tenor Mario Lanza but loathe Orson Welles, whom Juliet calls, “The most hideous man alive.”

Pauline Parker kept a diary during this period. The voice-over narration spoken by her character in the film were lines taken from the real Pauline's actual diary entries. They paint a portrait of obsessive love between these girls that worries both sets of parents. Afraid of the intensity of their bond, as well as the obvious budding physical aspect of their relationship, the parents eventually decide to separate the girls. This decision ultimately leads to murder.

In the early 1990s Peter Jackson had begun to make a name for himself as a cult director of horror/comedies. This movie marked a departure for him and really put him on the international movie map, so to speak. It was nominated for Best Original Screenplay at the Academy Awards but lost to Pulp Fiction. Heavenly Creatures includes some early examples of CGI used to good effect to bring Pauline and Juliet's fantasy world to life.

Heavenly Creatures marked the film debuts of its two female stars. Melanie Lynskey was cast just a week before filming began based mostly on her resemblance to the young Pauline Parker. Kate Winslet beat out 175 other actresses for the role of Juliet Hulme. Both women give indelible performances, including several kissing scenes which were quite daring for 1994. These performances are two of the most intense movie debuts I've yet had the pleasure of witnessing and Heavenly Creatures is a brilliant film that handles a difficult subject matter without sensationalizing it.

As a side note, as of this writing both Pauline Parker and Juliet Hulme are still living, although both women have assumed new identities. In 1994, after the release of this movie, bestselling mystery writer Anne Perry came forth to admit that she was in fact Juliet Hulme. Pauline Parker was harder to find but she was eventually located at a rundown cottage in Kent, England where she runs a school for handicapped children. Both women have found religion and expressed remorse for their past crime. Juliet Hulme has denied any lesbian aspect to their relationship.

My first thought watching this was, “Holy shit! That’s Rose.” Melanie Lynskey has long been a bright spot in many episodes of "Two and a Half Men", as their crazy obsessed neighbor. Playing a character clearly off her rocker is where her career began and will likely be her acting legacy. She and Kate Winslet are brilliant here as two neglected girls who got lost inside their imagination and ended up committing murder.

In a way, this film takes the side of the killers. Both girls have parents who seem to not have much time for them. Juliet’s parents send her away when the convenience arises. Pauline’s parents take on rooming boarders, which means her mother’s time is taken up by plenty of people besides her. It also shows these girls as sharing a forbidden love that society was not prepared for in 1954. I like how Jackson used an extreme close up of the doctor saying the shocking word, “Ho-mo-sex-ual.” to Pauline’s mother. He then assures her, “Chances are she'll grow out of it. If not... well, medical science is progressing in leaps and bounds. There could be a breakthrough at any time!”

Considering that the parents want to keep these girls away from each other, not to mention one of the girls name is Juliet, we have the making for some Shakespeare comparisons. Like the famous lovers of Verona, these girls experience love for the first time and like all true love, it was not planned or orchestrated. They do not know what to do about it. They just know that each has found someone who understands and loves them unconditionally. They did not question it; they just enjoyed it until reality intruded into their fantasy.

Although this is based on Pauline’s diaries, Jackson took some liberties with their fantasy world, interpreting it as he imagined. As Patrick wrote, this gave him plenty of opportunity for computer graphics. Those moments, as well as the showcasing of some very scenic New Zealand landscape, make for some foreshadowing of Jackson’s Lord of the Rings films.

As Patrick mentioned, Melanie Lynskey occasionally narrates through a voiceover reading from entries in Pauline’s diary. Lines like, “We have decided how sad it is for other people that they cannot appreciate our genius.” reminded me of her Rose character. I wonder what Lynskey thinks of her acting career highlights being parts where her character is loony? She is probably laughing all the way to the bank.