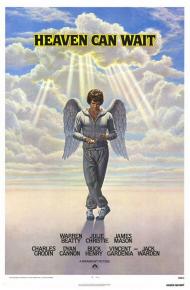 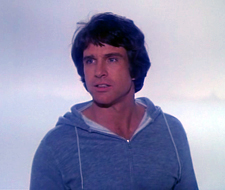 There are quite few movies from my early childhood that I remember fondly. Not all of them are classics. In fact, some of them seem down right cheesy when I watch them now, but Heaven Can Wait (a movie I watched over and over again on HBO), I not only remember fondly, but it stands up remarkably well today.

Warren Beatty co-wrote the script, co-directed the movie, produced it and also starred in it as Joe Pendleton, a back-up quarterback for the Los Angeles Rams. When Joe goes bike riding and seems destined to die in a horrific accident, an Escort Angel (Buck Henry) whisks his soul out of his body before the accident and takes him to a way station half-way between heaven and hell. It turns out however, that Joe wouldn't have died, but since his body has been cremated, the Escort and his boss (God?), played by James Mason, have to find Joe a replacement body. He winds up in the body of Leo Farnsworth, the CEO of an international conglomerate whose wife and Personal Private Executive Secretary have just murdered him. While in Leo's body, he buy the Rams so he can become their quarterback again and falls in love with Betty Logan, a environmentalist from England who has come to Leo to protest the construction of a factory near her home village.

Some of the movie's best comedy is provided by Dyan Cannon as Mrs. Farnsworth and Charles Grodin as Farnsworth's Secretary. The two of whom are having an affair. Cannon is drunkenly hysterical, while Grodin is very dry and sarcastic. One of my favorite scenes in the movie involves the two of them when they realize that Farnsworth isn't dead and Cannon screams. Grodin explains her screaming by stating, "She saw a mouse." "She just saw a mouse?" "No. Before. Outside. But she relives it." It might not sound hilarious just reading, but Grodin's delivery is priceless.

Of course Beatty is the heart and soul of the movie and he does a great job. His Joe isn't the brightest person in the world, but he's likable and well intentioned and he never stops running. I always feel that at the end of the movie although it's kind of a happy ending, that he gets screwed. It makes the ending both happy and sad, like all the best movies are. As a director Beatty has a light touch. He keeps the story moving briskly along. The movie never gets very serious and yet you care about the characters.

Apparently this is a remake of an earlier film from the 1940s, but I never saw the original so I certainly can't compare them. All I can say is that it would have to be very good indeed to be better than this version, which was nominated for 9 Oscars. It's good to know that some things from my childhood do live up to the memories and Heaven Can Wait is one of those things.

This is that rarity in Hollywood, a remake that improves on the original. I saw Heaven Can Wait before seeing Here Comes Mr. Jordan. While the original is funny and cleverly done, it lacks the heart of this version. One of the biggest changes made was Joe’s sport. In Mr. Jordan he was a boxer. Apparently Warren Beatty couldn’t box, but he had a decent arm for throwing the old pigskin.

As a kid my favorite parts of this movie were Charles Grodin and Dyan Cannon’s madcap murder scheming scenes. And I remember being touched by the relationship between Joe and his coach. Especially in the scene where Farnsworth convinces his coach that he is really Joe.

Now, though, I have to say that I really enjoyed the romance with Julie Christie. I never fully appreciated it before and it rendered the ending more bittersweet for me this time. One of the best sports comedies ever made, Heaven Can Wait is one hell of a funny movie.

James Mason had one of the greatest voices ever spoken on film.

It was the same for me Patrick. I was a teenager the last time I saw this film from start to finish. Watching it now, I appreciated the love story much more. Beatty and Christie stare at each other in ways that say so much more about what they are feeling than any dialogue could.

Cannon and Grodin are the funniest characters in the film. Their comic abilities make even the slightest joke funnier. Cannon's reaction to Beatty's mundane question at the dinner table is priceless. Grodin's reaction to almost anything Beatty says to him is hilarious. Whether Beatty asks him about mergers or what room he just hit a crocket ball in, Grodin responds in a hilariously dry manner.

The biggest surprise for me in watching this again was just how quickly it moves along. In a scant 101 minutes, Heaven Can Wait is a sports movie, love story, comedy, fantasy film. It has great dialogue, interesting characters and God bless it, it does it all in well under two hours. Judd Apatow, whose films he has both written and directed average over two hours in length, could learn a few things from this movie.