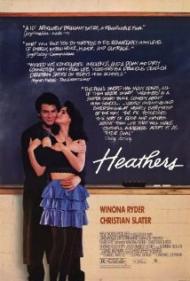 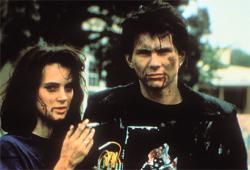 Heathers is a dark high school comedy about cliques that involves several murders disguised as suicides. It has a cynical sense of humor and features some truly quotable dialogue. It flopped at the box office upon its initial theatrical release in 1989, but has since attained a cult status whose imprint on popular culture continues to this day. An Off-Broadway Musical based on the movie is currently running in New York City.

Winona Ryder and Christian Slater (don't those names take you back?) are the two leads. She plays a girl named Veronica who has recently been accepted into the most popular clique at her high school. The other three girls in the group are all named Heather. Slater, meanwhile, seems to be imitating Jack Nicholson as the stereotypical loner/new student J.D. When he first meets Veronica he says, “Greetings and salutations... you a Heather?” (the name Heather is spoken some 90 times during the movie) She answers, “No, I'm a Veronica... Sawyer..” (Archie Andrews meets Mark Twain)

J.D. and Veronica quickly bond and have sex after an old fashioned game of strip croquet. Soon J.D.'s influence unleashes Veronica's repressed hostility which leads to the death of the head Heather after they fool her into drinking liquid drainer. J.D. convinces Veronica to write a fake suicide note. Later they add two dumb jocks to their body count. Afterward they leave a (fake) suicide note revealing that the two jocks were actually secret lovers. This causes one student to excitedly ask one of the Heathers, “Did you hear? School's canceled today cause Kurt & Ram killed themselves in a repressed, homosexual, suicide pact.” At their joint funerals, one of the boy's fathers states, “My son's a homosexual, and I love him. I love my dead gay son.” (you guessed it, the stage musical version features a song and production number entitled “I Love My Dead Gay Son”)

I won't reveal how the story culminates except to say it stays true to its decidedly dark vision of high school life in late 20th Century suburban America. Its two leads were then at the heights of their popularity but they almost didn't get these jobs. If the producers had gotten their wish Jennifer Connelly would have played Veronica. She turned it down. Brad Pitt was nearly cast as J.D. before being deemed “too nice” for the part. And a 17 year old Heather Graham's parents nixed her shot at playing cheerleader Heather McNamara. Now, of course, it's impossible to picture anyone else in these roles. Ryder & Slater make a great team in the tradition of such classic noir pairs as Barbara Stanwyck & Fred MacMurray in Double Indemnity, and Lana Turner & John Garfield in The Postman Always Rings Twice.

The real secret of this film's lasting success is the incredible script. Its bitchy quips and off kilter wisdom sound, at times, like an updated-teenaged version of Joe Mankiewicz. Here's a small random sample...

Heather Chandler, “Well, fuck me gently with a chainsaw. Do I look like Mother Teresa?”

Veronica Sawyer, “Suicide gave Heather depth, Kurt a soul, and Ram a brain. I don't know what it's given me, but I have no control over myself when I'm with J.D. Are we going to prom or to hell?”

You'll have to watch the movie to find out the answer to that last question.

One thing the 1980s are remembered for are the many great high school movies made during that decade. Heathers is among them, but it also has a sad legacy in the form of the sickening surge in school violence in this country over the past quarter century. Whatever innocence America had left in 1989 was fast disappearing. Now exactly just how much movies influence, or merely reflect, society is always going to be up for debate, but it's impossible to watch Heathers today without getting a slightly queasy feeling in the pit of your stomach. 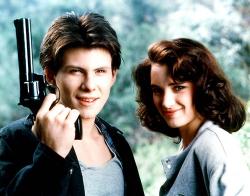 Heathers is a dark take on high school films. It collects the usual suspects of the popular girls, the jocks, the over achievers, the geeks and the outcasts. It presents them all with a sly, underhanded amounted of exaggerated truth.

Veronica and J.D. are stereotypes that go back at least as far as Jim and Judy in Rebel Without a Cause (1955). Slater’s character’s name even matches James Deans initials. Like Jim, J.D. is the new kid in town who has moved many different times after getting into trouble. At one point Veronica even yells at J.D., “You're a rebel? You think you're a rebel? You're not a rebel you're fucking psychotic!”

Veronica is like Judy in that Veronica is part of a cruel clique but is actually more sensitive once the rebel gets to know her. Veronica also reminded me of Clair in The Breakfast Club (1985), in that both girls admit to going along with their crowd all the while not wanting to. Veronica writes of the domineering Heather in her diary, "Tomorrow, I'll be kissing her aerobicized ass, but tonight, let me dream of a world without Heather, a world where I am free."

Like the Breakfast Club, the educators here are just as mentally distant from the students. One touchy feely teacher says to the other teachers, “I thoughtfully suggested we get everybody together for an unadulterated emotional outpouring. But no… You took this as an opportunity to play yet another round of "Let's Laugh at the Hippie." When she finally gets to hold, “…her little "Love-In" or... whatever.” She shoots down the first girl who wants to speak, “Now Tracey, let's not rehash the coroner's report. Let's talk emotions. Whether to kill yourself or not is one of the most important decisions a teenager can make.”

Heathers is a biting satire on stereotypes. Two lines always stand out for me. The first one is when J.D. says of the two arrogant jocks they just killed, “Football season is over, Veronica. Kurt and Ram had nothing left to offer the school except date rapes and AIDS jokes.” But the absolute best and darkest line is when one of the Heathers tells Veronica that an unpopular girl tried unsuccessfully to kill herself, and adds this editorial, “Just another case of a geek trying to imitate the popular people and failing miserably.”

Heathers is one of those films that could never be made today. As Patrick noted, since this film came out, school violence, bullying and teen suicide have finally been taken seriously. In this film, Breakfast Club and Rebel Without a Cause, the teens are struggling to make their own decisions. Notice that in all of these films, the adults are horrible at communicating with the teens and none of the teens have any real guidance. Hmmm! Maybe there is something we can learn from these movies. If not, then just sit back and enjoy some dark humor from a less medicated time.

There have been many great high school comedies. Fast Times at Ridgemont High, Clueless, and Mean Girls are three that leap immediately to mind, with the latter one owing the largest debt to this film, with direct parallels obvious between the Heathers and the Plastics. However, no other high school comedy has ever dared to go as dark as this one. And, as my brothers have noted, given the number of real life shootings at schools, the chance of anyone ever going this dark again with this type of film, is almost nil. In a way perhaps that's apt anyway, as it would take some doing to top this one.

Another connection between this film and Mean Girls is that the director of that film is the brother of Daniel Waters, the writer of this one. The fact that an almost 30 year old man wrote this script seems rather remarkable. He was able to capture the timeless hell that high school can be, while featuring fully developed young women as the main characters. Given how sharp this script is and how quotable, I expected to discover that he had written many other films, but that's not the case. He has only 7 other screen writing credits to his name, although one of them is as recent as this year's Vampire Academy.

As good as the script is, and it is great, it's the performances that really make it work. I'm a huge fan of Jennifer Connelly, but Winona Ryder is perfectly cast as Veronica. She plays the melodramatic teen girl better than anyone else could play it. Only in her case, the world really could be coming to an end. Likewise Christian Slater is irreplaceable as J.D.. He does channel Jack Nicholson, but with his own youthful spin on the character. He's playing the stereotypical Hollywood loner, only instead of just appearing unstable and misunderstood, he really is unstable. Playing these two fucked-up high-schoolers would be the pinnacle of both their careers. And the faults in their characters are part of what make this movie work. Veronica complains to her diary, while wearing a pretentious monocle, about life in high school, but does nothing to change it. Until the film's climax, she does literally everything anyone asks her to do. J.D.'s flaws are a little more self-evident.

This is one of those movies that you can watch and enjoy purely as a comedy, or if you care to look deeper, you can see in it a reflection of society. It has wit and brains, with laugh out loud moments, including a very funny use for mineral water, as well as darker truths about popularity and the power it brings, and all of it is wrapped up in a Midwestern high-school package.

There have been talks of a sequel for many years. Daniel Waters envisioned one where Veronica became a page at the White House, working for a Senator named Heather, but nothing ever came of it, despite Winona Ryder voicing support for the idea. It's probably for the best. This movie is perfect the way it is. It requires nothing further. 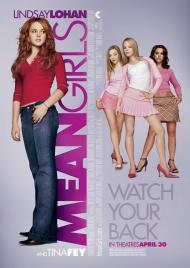