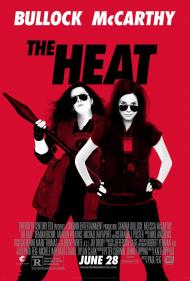 Sandra Bullock and Melissa McCarthy in The Heat.

William Holden's Sunset Boulevard character Joe Gillis, a screenwriter, said, "Audiences don't know somebody sits down and writes a picture. They think the actors make it up as they go along." Increasingly however, in today's comedies that is exactly what is happening. The actors are making it up as they go along. Such is the case with this movie, where Sandra Bullock has revealed in interviews that much of the film's humor was improvised. As with most movies where that is the case, this one proves that most actors should stick to acting and let writers do the writing.

The humor in this female, buddy cop picture is very hit and miss. Some of the jokes are funny and some are not, but only a few are really, really funny. Melissa McCarthy has proven herself to be an able comedian and she's able to deliver some of the film's funniest lines, but first you have to accept that this extremely overweight woman is somehow considered to be a tough Boston cop who somehow manages to cow her male counterparts in fear without any of them telling her to shut the fuck up.

It is the pairing of Bullock and McCarthy that makes the film work. Female buddy movies are rare enough to make this fairly run of the mill cop picture more unique than it really is. Bullock is basically playing the straight man to McCarthy as the uptight FBI agent who is sent to Boston on a drug case. She runs afoul of McCarthy's streetwise, local police officer character, who is also working the case. Before you can say "The Odd Couple", the two are paired up and bickering as they slowly begin to bond with each other on the way to tracking down the bad guys.

Although McCarthy is the more blatantly funny of the two, Bullock steals a few scenes of her own, particularly when she begins to loosen up and tries her hand at swearing, something that is a particular specialty of McCarthy's. And speaking of scene stealers, McCarthy's character's family, filled with stereotypical lower class Bostonians, complete with strong accent, provide some of the film's funniest scenes.

The Bechdel Test is a test given to movies to see if they meet three criteria: (1) it has to have at least two women in it, who (2) talk to each other, about (3) something besides a man. The fact that so many movies made today still fail that test is the reason why a female buddy movie is such a rarity. There are always reasons given for this, like the standard one about women going to see movies that star men, but men not going to see movies that star women or even the old fashioned idea that women can't be (or shouldn't be if you're Jerry Lewis) funny. Movies like this one and Bridesmaids (both directed by Paul Feig) are doing what they can to defy those stereotypes.

There really isn't much more you could do with these particular characters, apart from more of the same, so I can't say I'd look forward to a sequel, but I did enjoy Bullock and McCarthy as a team. With a stronger script and much less improvised comedy, I'd happily go and see them together again as completely different characters. Their chemistry is the real heat.

Bullock and McCarthy bring The Heat.

I agree that much of the dialogue seems ad-libbed, especially Melissa McCarthy's lines. She is very funny but some of her riffs begin to drag before she's done milking them. A little of her humor goes a long way. The Heat is the first feature film screenplay by Katie Dippold. She's a very funny lady who works as a writer and producer on the hit television sitcom Parks and Recreation. Sandra Bullock rounds out this trio of funny ladies. She makes a great foil for McCarthy to bounce her humor off of.

The buddy cop film is a genre that long ago ran out of originality. The Heat breaks new ground by giving us this distaff version. Other than the fact that the two main characters lack penises it really doesn't bring anything new to the genre. The formula is tried and true. Two opposites get thrown together on a case, bicker on their way to becoming BFF's before eventually solving whatever generic crime the script calls for.

Having said that I do think it's worth the price of admission to watch these two very funny gals do their shtick. McCarthy's sewer mouth is enough to make a sailor on shore leave blush (yeah Scott, I don't think Jerry Lewis is a fan). Bullock makes like Bud Abbott to McCarthy's Lou Costello and plays the straight man (woman). She does double takes as well as anyone in the business and she's also a fine physical comedienne. Together she and McCarthy make a very funny duo.

Unfortunately the movie feels padded. It is yet another example of a comedy that runs too long. If they had kept McCarthy in check a bit more and cut about 20 minutes from the final print The Heat could have been a classic example of the buddy cop genre. As is it's still a solid 2½ star comedy.

Melissa McCarthy and Sandra Bullock in The Heat.

I have liked everything Melissa McCarthy has been in up to this point. She has perfected an obnoxious, yet likable character all her own. She has found roles that allow her excessive weight to play into her jokes and likability. Here however, as Officer Mullins, she was not able to completely pull it off.

The film starts with her personally harassing a man for solicitation of a known prostitute. With said person handcuffed in the back of her car, she runs down and captures a healthy young male. This woman, who cannot walk without waddling, is able to drive after this man who is running on foot, outsmart him by driving around the block, knowing where he is going, jump out of her car and capture him.

Watching her fat ass crawl out her car window because she decided to park in a spot she should not have did not endear me to her, it just made me think how stupid she was. She disrespects and tries to humiliate her boss. She steals information from Bullock.

Bullock is meanwhile playing an arrogant, by the book kiss-ass. Ashburn marches into the Boston police station, waving her badge as if it makes her better than everyone else. She looks down at the local law enforcement as if they were children and she was their mother. She seems to know where perpetrators hide things as if she had Superman’s x-ray vision.

Once they join forces, they begin breaking more laws than anyone else on screen. Nearly anyone they interview could report them for police brutality. McCarthy is constantly pulling her gun on people, for very little reason. At one point they dangle a man over a railing to get him to talk, and then drop him. At another point, Bullock cuts a man’s throat, thinking she is doing a tracheotomy. How these two are considered the best at their jobs can only attest to how bad everyone else they work with must be

Eventually we start to learn more about these ladies past and I started to like them a little better. Ashburn is a loner who has never had any friends. Mullins' family creates a wee bit of sympathy for her and is worth some laughs. Her brother is a hapless convict. Her mother drives past her on the street, holding her middle finger up at her. The family thinks Ashburn is a man. One of her brothers is played by New Kids on the Block member, Joey McIntyre. When Mullins arrives for family dinner, he announces, “Great! This asshole.”

As my brothers wrote, Bullock and McCarthy work well together but Bullock, who is in much better shape, should have played the tough Boston street cop, while the obese McCarthy should have played an FBI book worm. Although played for laughs, it is a tough pill to swallow that Mullins, as played by McCarthy, sleeps with lots of men who want long term relationships with her. The Heat was a decent idea but the execution, not so much.