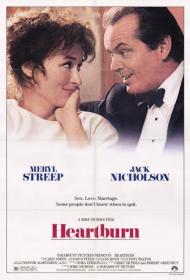 A movie directed by Mike Nichols, from a screenplay (based on her novel) by Nora Ephron, starring Meryl Streep and Jack Nicholson has a lot going for it. It also has a lot to live up to. Heartburn never reaches the level of greatness suggested by the sum of its celebrated parts. Ephron would go on to write better scripts, Nichols certainly directed better films, and Streep and Nicholson would reunite the following year in what most people consider to be a superior film, Ironweed. Heartburn has its moments but it's extremely one-sided and the script often mistakes bitterness for humor.

The story is based on Ehpron's tumultuous real life marriage to Carl (All the Presidents Men) Bernstein. Streep is Rachel Samstat, a New York City food writer. She meets Mark Forman (Nicholson), a Washington D.C. based political columnist and they have a whirlwind romance, get married, and begin having babies. And then the roof caves in on Rachel when she finds out her husband is cheating on her. She's got an infant daughter and another baby on the way but she still manages to find time to attend group therapy sessions when she's not preparing gourmet meals for her husband.

Streep is particularly good as the heartbroken mother trying to pick up the pieces after her world falls apart. Unfortunately the script portrays her as practically the perfect little wife and mother while Mark remains pretty much just a symbol of the cheating male, rather than a real person. Ephron was perhaps too close to the story to fully develop its inherent comedic possibilities. A few years later she would successfully recycle certain aspects of the story in When Harry Met Sally. The couple played by Richard Masur and Stockard Channing here are incredibly similar to the couple played by Bruno Kirby and Carrie Fisher in that romantic comedy classic. And just as Billy Crystal does in When Harry Met Sally, Jack Nicholson humorously sings a show tune in Heartburn.

Jack Nicholson replaced Mandy Patinkin as Mark Forman after Mike Nichols realized Patinkin and Streep had no chemistry together. Nicholson and Streep do generate some sparks although neither is particularly known for their romantic leading roles. But the script rushes through their falling in love scenes so that the audience barely has any time to invest in their relationship before it hits the rocks. And once that happens Nicholson disappears from the movie for much of the third act.

From Maureen Stapleton as Rachel's therapist to Kevin Spacey making his movie debut as an armed subway thief, Heartburn boasts an impressive array of familiar faces in supporting roles. Jeff Daniels, Catherine O'Hara, Joanna Gleason, Mercedes Ruehl, Anna Maria Horsford, Steven Hill, and even legendary director Milos Forman all show up in small or cameo roles. Spacey was a baby-faced 26-year-old at the time and his big scene is robbing Rachel's entire therapy group at gunpoint.

Heartburn tells the story of one woman's journey from a young idealistic romantic to a wiser embittered woman (and mother of two small children) able to put a pie in her philandering husband's face and walk out. But since these are upper middle class citizens her triumph is of the emotional kind only. She doesn't have to worry about paying the bills, she simply gets on that plane with her kids and flies off, but to what? Heartburn never really gets beneath the surface of Rachel and Mark's marriage. Thanks to the incredible emoting of Meryl Streep we are able to understand Rachel on a deeper level than the script alone allows. But great acting, and even great directing, cannot overcome the limits of a mediocre screenplay. 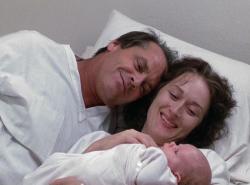 Jack Nicholson and Meryl Streep are such iconic actors that their names alone make this a movie worth checking out. Their pairing is akin to Spencer Tracy and Katharine Hepburn. They are the best things about this tepid dramedy.

I agree with Patrick’s point that, as Ephron is depicting herself, she wrote a script that portrays herself as the victim. Why is it that when a wife has an affair, too often the husband gets the blame for neglecting her but when a man has an affair he is a dog plain and simple. Had Mark been completely content in his marriage he would not have sought out other company. Had he been given sufficient sexual attention from his wife he would not have found it elsewhere.

Yes, I know Rachel was pregnant during this time and as I and most fathers can attest, there is no more selfish creature in the world than a pregnant woman. Granted, it is all biological nesting instinct going into over drive but all a pregnant wife talks about is themselves, the baby and how much the next baby related purchase is going to cost, reducing the husband to a wallet and chauffer, taking her to the next doctor’s appointment. And Sex, well that becomes a thing of the past. If ever in a marriage there was a time to forgive a husband for having an affair, it is when the wife is pregnant

Rachel is so selfish that when her father suggests that she let one of the children live with Mark, she yells, “Are you crazy? They’re my children.” So Ephron does not see children as belonging to their father? Rachel forgives Mark but she moves back in with him acting depressed and miserable. Who would want to be with her in that pathetic state? It takes two to make a marriage and two to make a divorce.

I did not care for either of these characters but there were a few scenes that I liked. The scene in the beauty parlor where Streep puts it all together is a good piece of acting. It starts comical as Streep watches the beautician destroying her hair as she rambles on about her cheating boyfriend to another employee. Slowly, Streep stops caring so much about her hair and begins listening to the girls and applies what is being said to her own life. I also enjoyed the scene where her therapist group gets robbed and her ring won’t come off because her finger is swollen due to being pregnant.

Although Nicholson was not given as much to do as Streep, he shines in the scenes where he sings. Both he and Streep have, as Patrick wrote, been in better films. Heartburn is simply a lifetime channel movie with headlining movie stars in the lead roles.