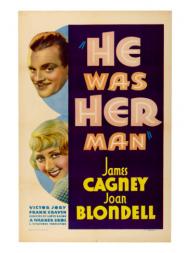 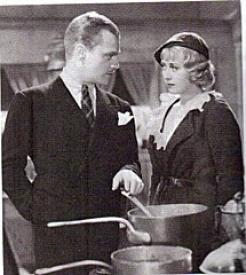 James Cagney and Joan Blondell in He Was Her Man.

He Was Her Man was the seventh and final screen teaming of James Cagney and Joan Blondell. Although they exhibit their usual chemistry together the story is lackluster. Lloyd Bacon’s direction seems uninspired while James Cagney sports a rather unflattering mustache.

Cagney plays a New York City safecracker with the unusual moniker of Flicker Hayes. When the movie opens Flicker has just been released from prison (what a surprise). He takes a job but demands his share of the cut up front. Believing these guys to be the ones who set him up the last time, he turns stool pigeon and calls the cops on his partners. When a police officer gets killed during the burglary one of the men escapes while the other winds up in the electric chair. Flicker goes on the lam to San Francisco with plans to leave the country, while the surviving member of the gang seeks revenge on the wayward safecracker.

Cagney crosses paths with Blondell, playing a streetwalker named Rose. He seduces her in this movie that just snuck in pre-Code. She confesses to being engaged to a Portuguese fisherman who doesn’t care about her past. Flicker (using the alias Jerry Allen) stakes her to a bus ticket then accompanies her to her future husband’s small fishing village to hide out. Unbeknownst to him he has been recognized and soon has a couple of hit men hot on his trail.

This is one of Cagney’s most obscure pictures. Like many pre-Code movies it wasn’t shown on television until TCM rescued it from the vaults. The fact that Blondell’s character is a prostitute was a bit too blatantly portrayed for TV consumption back in the day. She brings a real sense of sadness to the part and provides the story with what heart it manages to muster. Cagney, meanwhile, plays one of his least likable characters. For once I found myself not rooting for him to get the girl.

He Was Her Man is an offbeat melodrama/gangster picture. It is a curiosity for fans of the great James Cagney and the underrated Joan Blondell. Together they created one of the most charismatic and original movie pairs of the early 30s. He Was Her Man remains their least heralded collaboration for good reason.