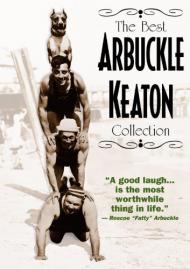 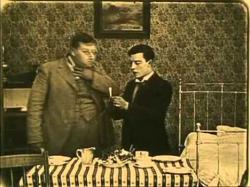 Roscoe (Fatty) Arbuckle and Buster Keaton in The Hayseed.

The teaming of Arbuckle and Keaton began to wear thin with The Hayseed. They would only make one more movie together after this one. Not only is the plot sadly like many of their other movies, but even some of the sets are the same as well. The building used for the general store looks like the same one that Arbuckle stood in front of, trying to light his cigarette in the rain, in Good Night Nurse.

In The Hayseed, Keaton runs a general store while Fatty is a mailman. In one scene he delivers the mail to a girl he likes and they end up playing hide-n-seek in the haystacks. As usual, another man has the hots for Arbuckle's girl. This time it is a crooked police officer. Keaton catches him stealing.

The best joke the movie has to offer is when Keaton suggests to Arbuckle that he eat a bunch of onions because it will make his soar throat feel better. Everyone reacting to Arbuckle's bad breath is the funniest and most original gimmick to be found here. Keaton, Arbuckle and the cop fight and do some slapstick but at this point in their film careers it was old hat.

The one noticeable change is that Arbuckle's long time companion, and nephew, Al St. John is nowhere to be seen. I am not sure why he stopped working with Arbuckle, but after watching this snooze of a comedy it was probably not a bad thing for him. 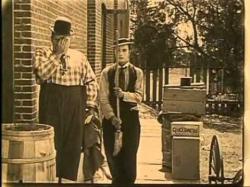 Roscoe Arbuckle and Buster Keaton in The Hayseed.

Eric, although his name isn't listed on either the IMDB or Wikipedia pages for this movie, Al St. John's name is listed among the opening credits onscreen. He appears as the Postmaster in a smaller role than he usually played in Arbuckle/Keaton comedies. For whatever reasons Jackie Coogan Sr. got cast in the role St. John normally would have played of the villain.

I agree with Eric that this isn't one of their better shorts, although there are some amusing bits here. Arbuckle manually drilling holes into a piece of cheese is funny, as is Keaton driving a horse and buggy backwards. Keaton getting hit repeatedly in the face by the crooked constable after Keaton catches him stealing and then told that next time the guy will “get tough” with him is amusing. I also chuckled at the costume jewelry that comes with a pickle for measuring ring size.

Like many silent two-reelers the final act is the funniest. Once Arbuckle and Keaton arrive at that dance the comedy gets kicked up a notch. Their overly exuberant dancing is quite funny. Keaton's attempt at a magic trick by making a rabbit disappear is hilarious, and like Eric, I laughed at Arbuckle's onion breath. It's so bad that even Luke the Dog walks away in disgust.

The Hayseed may not represent either Roscoe Arbuckle's or Buster Keaton's best work but like virtually all of their movies together it features plenty to laugh at. 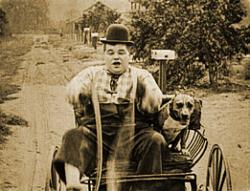 Roscoe Arbuckle in The Hayseed.

I don't believe the partnership of Arbuckle and Keaton was wearing thin exactly. They still make a very potent comic combination even if the script for this short isn't the most original or funny. The overweight, more dominant, cocky Arbuckle and the smaller, acrobatic Keaton with his deadpan expression could still produce laughs. Certainly as Keaton would soon prove when he struck out on his own, he wasn't out of comic ideas. Perhaps if their work together had been more of a true partnership instead of Keaton being basically Arbuckle's sidekick, they could have kept making movies together.

Like my brothers I did find some things to laugh at in this short, even if some of the jokes do fall rather flat. The onion breath and the cheese holes are funny bits. There are also a couple of amusing physical bits, such as when Arbuckle and Keaton dance with the older woman, flipping her around like a rag doll, or when Arbuckle delivers the mail and is able to perfectly toss the letters into the slots.

In between the funny stuff though, there's plenty of filler. This is a 20 minute two-reeler, but probably only enough jokes for a one. It's also lacking a unique physical stunt by Keaton to make it memorable. The one thing he does do that stands out is to make a face when he smells Arbuckle's bad breath. It's so strong that it cracks even the great stone face.

I agree this wasn't their best work, but it will put a smile on your face, even if it doesn't make you bust a gut.