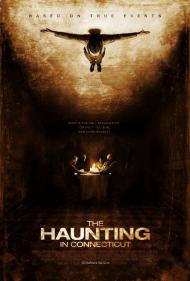 Get out of the fucking house already!

The Haunting in Connecticut is supposed to be based on true events as the promotional material and captions at the beginning and end of the movie repeatedly tell us. It's as if the filmmakers are saying that by the virtue of being based on a true story this is a better movie. Well even beyond the fact that all this "true events" stuff is clearly bullshit, even if it was true I'd rather they'd made some stuff up, because maybe then they could have made a good movie instead of just a mediocre rip-off of The Amityville Horror.

Virginia Madsen stars as Sara, a mother and wife whose oldest son; Matt, is dying of cancer. To be closer to the hospital where he is receiving treatment, Sara rents a big old house in Connecticut. Her husband splits time between their other home and the rented one but is mostly absent. Also living in the house is Sara's other son Peter, her niece and her niece's daughter.

It doesn't take long before we learn that the house used to be a mortuary and we start seeing strange things happening around the house. At first only Matt sees the ghostly images and he's receiving an experimental treatment for his cancer that he was warned could cause audio and visual hallucinations.

Like a lot of horror movies, the beginning is the best part. The story is set up and you're not sure what's going on. There are some scary scenes where you catch something reflected in a mirror or see something in a flash of light. There's some genuinely creepy imagery. As the story progresses however, and it is forced to explain what's going on, it quickly proves itself to be fairly mundane and has nothing new to offer.

My biggest complaint with movies like this is just why the hell do these stupid people stay in the house? I don't care if you just spent your life savings on the place or signed an incredibly binding lease and will be homeless if you move out, when burned and scarred-up ghosts are walking around in your house, you get the fuck out of it. There are several moments in this movie where you just have to scream at the screen, "Get out of the god damned house already!".

The plot is fairly predictable especially as you've probably already seen it a few times in other movies. Even the "twist" in the plot was lifted directly from The Ring. There is also an unnecessary subplot to the movie about the father being an alcoholic which never really goes anywhere. There's one scene where you think his getting drunk is going to affect the story but then it really doesn't. The whole script just has a lazy and unoriginal feel to it.

Okay, so I wasn't exactly bored while watching this movie, but I also wasn't exactly on the edge of my seat either. I think it's about time Hollywood put the haunted house storyline on hiatus. It's been done to death.