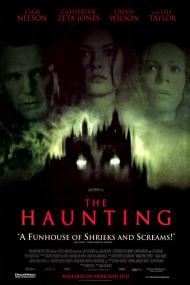 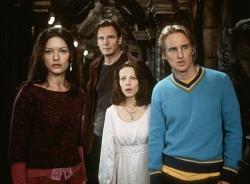 The Haunting will go down in film history for it's cast. Neesom, Zeta-Jones and Wilson all went on to bigger and better things after making this nearly forgettable horror film. The Haunting is barely even a horror film at that. The cast and setting are fairly interesting but the movie really lacks in the horror category.

Three people take part in a sleep study at a impossibly huge mansion. However, they soon begin to experience strange noises and occurrences. The Doctor in charge of the sleep study never sees or experiences anything of the odd going ons. It quickly becomes apparent that the sleep study is actually a study of fear. The people are guinea pigs in this big maze of fear. So the big question of the movie becomes what is a set up for the test and what is really happening. Either way, the scares are few and far between.

The real star of The Haunting are the movie sets. The mansion looms above every scene and action. "It's like Charles Foster Kane meets the Munsters." Theo describes the mansion at one point. There is so much detail in the sets and rooms that I found myself looking at other things in the room besides the actors. If they gave out Oscars for set construction, The Haunting would have won. The sets have more depth than the characters.

Zeta-Jones is unconvincing in her role. She does a decent enough acting job but she is horribly miscast. She is above this material and is better when playing a more sophisticated character. Wilson is Wilson. He gets a couple of decent lines but nothing great. "You don't get this from the Martha Stewart Catalog." he says referring to the Hell door. Neesom is playing an early version of his Kinsey role, only instead of sex, he gets excited by fear.

The Haunting is a decent watch for fans of these actors, but, it will not do much for scaring you.