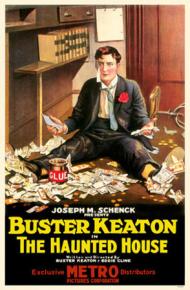 Buster Keaton and cast in The Haunted House.

This short was written and directed with by Keaton with Edward F. Cline, who worked with Keaton on several films.  It has very little plot but is fast paced and demonstrates Keatons acrobatic/comic charm.

Buster works at a bank as a teller.   He gets into trouble when he accidentally spills glue on some money.  It gets stuck everywhere, hands feet, butt.  Two guys get their butts stuck together.  Before that mess can get cleaned up, some men come in to rob the bank.  Buster gets falsely accused of being a bank robber, so he runs off and ends up in a 'haunted' house,  which is really the hideout for the real criminals, who have rigged the place to appear haunted.

Meanwhile, the cast of a play, Faust, has been chased off their stage for being so bad.  Did people really throw vegetables at actors?  Still in costume, they end up at the same haunted house as Buster, causing more confusion.

Buster jumps, climbs and runs around with his usual energy.  He was short, but very agile.  Keaton often experimented with "special effects" and this movie has a decent one.  While in the house, two men dressed as skeletons carry body parts into a room, and then assemble the parts to make a man standing in the middle of the room.  Other than the last second, where the mannequin is replaced by a man, the effect is good, and kind of creepy, for 1921.

My son, who loves the Three Stooges, likes watching Keaton films with me.  At almost 100 years old, Keaton's antics are still fun to watch.  The lack of dialogue or sensible plot mean nothing.  The fun is in ordinary situations, exaggerated for comic affect.  What kid has not made a mess, or ran away in fear.  Slapstick is the first kind of humor humans learn, and in that, movies like The Haunted House are timeless. 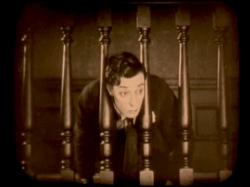 Buster Keaton gets his head stuck in The Haunted House.

Keaton was known as the Great Stone Face, but if you get a clear copy of one of his shorts (which isn't always easy) you can see that just because he doesn't often crack a smile doesn't mean that he doesn't act. One moment stands out in this short where he gets his head stuck in between the bars of a railing in this short and when he squeezes his head out he gives the railing a look of quizzical hurt as if it had willfully trapped his head. It's subtle little nuances like this that are too often lost because of the poor condition of old films.

After watching quite a few of Keaton's shorts, I have to say that I have become something of a fan of his. However, he does sometimes milk a joke. In this short it's the glue that he sticks with for far too long. It's funny when he first glues the money to his hand, but then he keeps running with it for too long. Although the funniest moment with the glue doesn't come until the end of the bit when the two gentlemen's backsides become stuck together.

The haunted house is filled with special effects and gimmicks. Some of them work for laughs and some don't. I laughed when so many ghosts appear that Keaton pauses to actually direct the traffic. Others, like the assembling of the body that you mention Eric are innovative camera tricks that Keaton used not so much for laughs but rather to amaze.

Eric, you failed to mention the most classic moment in the short and that is the finale when Keaton is knocked unconscious and he dreams that he climbs the steps to heaven, but is denied entrance. St. Peter then pulls a lever and the stairs turn into a slide, mirroring the stairs in the haunted house. Keaton then slides all the way down to Hades where the devil switches the sign that says Keaton "Out" to Keaton "In". It's a great ending to just a so-so short. 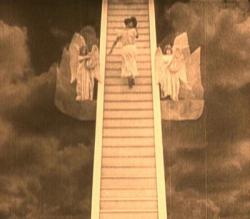 Buster climbs the steps to Heaven in The Haunted House.

This movie definitely improves as it goes along. The first half in the bank is the weakest section. It has a tired been there/done that feel to it. I agree with Scott that the glue gag drags on too long. And the time-lock vault door gets overplayed as well.

To add to what Scott wrote about Keaton’s acting talent, I will mention the scene where he shares a near kiss with a woman customer at the bank. It is a wistful little romantic moment. A look of blissful yearning flickers across Buster’s face as the woman leans in seductively with her lips just inches from his. He quite often added these tiny little details, which gave his characters just the right human touch to rise above being merely one-dimensional clowns.

Once the cast performing Faust enters the movie it really picks up. They are not only horrible actors but they also have really bad set designers. Their costumes add a lot to the haunted house scenes and the dream Keaton has at the end about winding up in Hades ties in perfectly to the Faustian theme.

The gag of the body being assembled is quite a remarkable visual trick for the era. Keaton was indeed peerless in his technical innovations. The Haunted House starts off as a run of the mill Buster Keaton short. It finishes strong, as a memorable and above average bit of film in his catalogue.