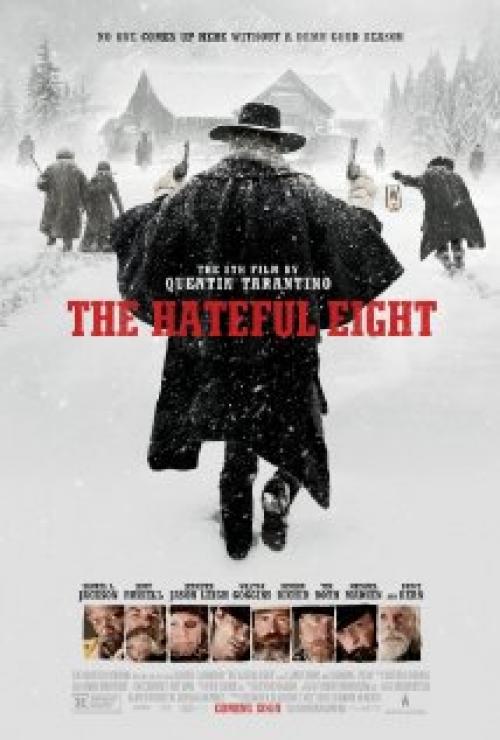 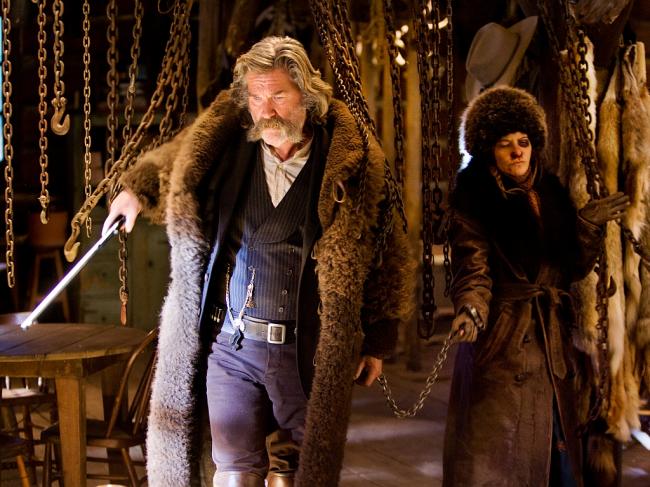 Kurt Russell and Jennifer Jason Leigh in The Hateful Eight.

More than once on this site we have mentioned how difficult it is to sustain a movie without any likable characters. It's even more difficult when the movie runs nearly 3 hours long as this one does. Like all Tarantino movies, it packs a lot of action, humor, and violence, all wrapped up in a glossy package. However, spending such a long time with some of the most unpleasant characters ever put on the screen, is a hard sell.

The lack of heroes in the story was a deliberate choice of Tarantino's. He was inspired by the Western TV shows of the 1960s, like Bonanza and The Virginian, which all seemed to feature an episode where a bunch of outlaws would take the lead character hostage. In an interview with Deadline.com he said, "What if I did a movie starring nothing but those characters? No heroes, no Michael Landons. Just a bunch of nefarious guys in a room, all telling backstories that may or may not be true. Trap those guys together in a room with a blizzard outside, give them guns, and see what happens." What happens is entertaining, up to a point. Without a Michael Landon to root for, the story just meanders. It's not much of a spoiler in a Tarantino movie to reveal that some of the characters die, but honestly, by the end, I didn't care if any of them survived.

In January 2014, the script of the film was leaked online, following which, Tarantino briefly considered turning it into a novel instead of a film. Adapting it as a play would have made more sense. Apart from the opening scene in a stagecoach, nearly the entire film takes place in the one room. And with such a limited cast and a long running time, the finished film ends up feeling like a play anyway. It's almost ironic that Tarantino filmed the movie in an ultrawide 70mm,2.76:1 aspect ratio, of the kind they used to brag about in the 1950s and 1960s. In fact, Tarantino revealed that the lenses used to film this movie were the same lenses used to film 1959's Ben-Hur.

The plot is a simple one. Some unspecified few years following the Civil War, a group of people end up in a stagecoach stop in the middle of a blizzard. Kurt Russell is a bounty hunter bringing in a female prisoner (Jennifer Jason Leigh) for the reward. Samuel L. Jackson is another bounty hunter and acquaintance of Russell's. Along with the two bounty hunters and the prisoner, there's a sheriff, a former civil war general, the stagecoach driver, a hangman, and the guy running the stage stop. The thing that all of these different characters have in common is that while it's fun watching them go after each other, you really wouldn't want to actually spend time with any of them personally.

For the first couple of hours, Tarantino's trademark style and wit, coupled with some great performances, keeps the movie entertaining. Jennifer Jason Leigh is a scene stealer as the only female member of the main cast. Her violent relationship with Kurt Russell as her captor provide some of the best moments in the film. But really, there's not a bad performance in the bunch. Even Channing Tatum, who's not normally the most talented actor in the world, does good work in a small part near the film's climax.

Although Tarantino is known for including violence in his films, he nearly out does himself here. By the film's climax, that room is coated with blood and guts. People are literally shot in the face (and other body parts) at close range without the camera cutting way. Every Western ever made has shootouts, but this is one of the only ones to actually show the consequences of bullets ripping through flesh. It's definitely not a movie for the squeamish.

Any fan of Tarantino's (of which I count myself a member) is bound to find things to enjoy here, at least for the first couple of hours. Eventually though, as the film gets bloodier and the body count grows, it all starts to feel rather pointless. It's enough to make you wish that the Cartwrights would come riding through the snow to burn the whole place down. 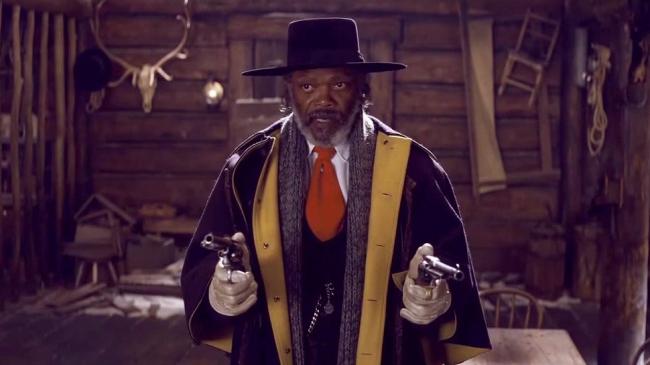 Like Tarantino's previous seven movies, The Hateful Eight is good and bad. On the plus side are the strong central performances (I agree that Jennifer Jason Leigh is a scene stealer – but Samuel Jackson is playing a parody of his screen persona) and some stunning outdoor cinematography – unfortunately, as Scott mentioned, the majority of the film takes place indoors in a one room setting.

The script starts off promisingly enough. Early in the story, while the various characters are meeting for the first time, Tarantino's gift for gab is on full display. It features the director's trademark whip smart dialogue and there are many little homages to the western genre. I was curious to know where things were heading and I didn't have long to wait. It soon becomes quite evident that the story is really just an excuse to have colorful bad guys spout quotable but unrealistic lines at each other while blowing each others' faces off with shotguns.

Like my brother, I thought the movie outstayed its welcome by at least 45 minutes. The screenplay starts to sink under its own preposterous weight by the time the director's odd voice-over narration begins. Then when we have to sit through the events from earlier in the day it falls apart completely. At this point the audience can piece together the details without having to sit through additional superfluous violence and carnage simply because the filmmaker thinks it's cool. In short, The Hateful Eight lives up to its title. 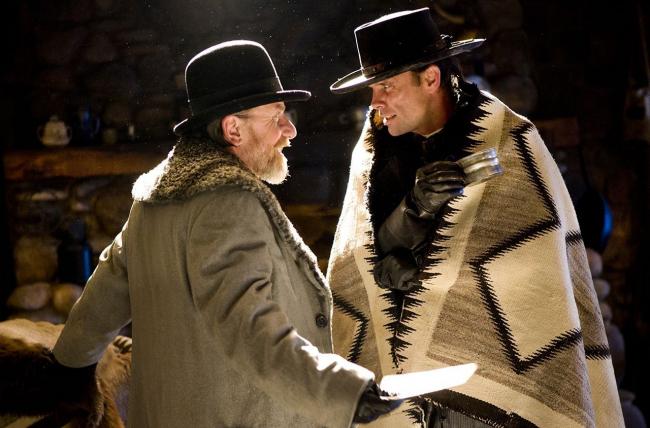 Tim Roth and Walter Goggins in The Hateful Eight

All movies, for the most part, are told in thirds. The first is the introduction of characters and setting, The second is the conflict or challenge presented to those characters and the last is the resolution or reveal. The Hateful Eight follows this pattern, only at three hours long each third takes an hour.

The beginning should have been trimmed by a half an hour. That is all we need to meet these eight yahoos. The chapter titles were completely unnecessary, as was the narration. We did not need to see the felatio flashback. Having Samuel L. Jackson describe it is enough as it leaves it up to us to decide whether or not it actually happened. After all, he is just telling the story to piss someone off. It is their reaction to the story that counts, not ours.

Although Tarantino does not always know when to have his characters stop talking, he does, as Patrick noted, often write some entertaining dialogue. John explains how he wants to communicate with Daisy, "When I elbow you real hard in the face, that means, shut up." Later Daisy tells John, "When you get to hell, John, tell them Daisy sent you." Tarantino even tries to make a social statement on race.

This movie is filled with colorful characters as everyone seems to have a story to tell. Scott stated that there was not a "hero" to root for. Actually, there are some "good guys" but their flaws make them hard to like. You never know which of these detestable people you can trust. It makes for an interesting and suspenseful watch but ultimately a hollow outcome.

There was a reason all of those old westerns featured a white hatted hero to root for. The audience needs to care about their safety. We truly do not give a shit about any of these people and thus we never emotionally invest in any of the proceedings. It matters not which of these characters die, leaving only the anticipation of violence and gore to keep us watching and as this is a Tarantino film, we know what is coming in the final third of The Hateful Eight.