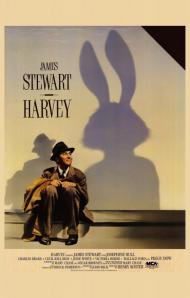 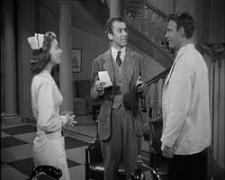 From trying to get Jean Harlow to marry him in Wife vs Secretary (1936), to protecting his family in Shenandoah (1965), James Stewart made a long career out of playing nice guys. It was his stock character, and what his fans always remember him for. Out of all of those good guys, none were more pleasant that Elwood P. Dowd.

Harvey is a large rabbit that only Elwood can see. It showed up shortly after his mothers death. It is Elwood’s best friend and constant companion. Harvey lives with him and every day they go to some local bars to socialize. Elwood is always eager to meet and talk to strangers,"I always have a wonderful time, wherever I am, whomever I'm with." He politely states.

His sister Veta, and her daughter, who also live with Elwood, have a different opinion. They try to keep Elwood out of sight as his "friend" is an embarrassment to them. After he destroys one particular social event at their home, Veta tries to get Elwood committed to a sanitarium, but ends up accidentally committing herself. Comedy ensues as everyone tries to put all of the pieces together. My favorite line is when an orderly is looking for Elwood in a bar and asks if Elwood is alone. The Bartender responds, "Well, there's two schools of thought, sir."

Stewart and Hull played their same roles on the stage together. For the movie, Hull won an Academy Award for best supporting actress. Stewart was nominated for best actor. He would reprise this role in a 1972 television version of Harvey. An orderly at the sanitarium, who has the hots for Veta’s daughter, will be very familiar to anyone of a certain age. He was television's Maytag repairman for 20 years.

The message of Harvey is that crazy is relative. So what if Elwood talks to a huge rabbit. He is still very nice and respectful to everyone. Should he be judged on his imagination instead of his manners? "It's our dreams, doctor, that carry us on. They separate us from the beasts. I wouldn't want to go on living if I thought it was all just eating, and sleeping, and taking my clothes off, I mean putting them on..." Veta explains at one point.

To everyone in the movie, Harvey is a nuisance. To Elwood, he is a gift. He takes him into bars and introduces him to men with problems. In a strange way, they help people. The movie ends with a classic scene of Elwood walking off into the sunrise. He stops, looks to his side and says, "Well, thank you Harvey! I prefer you too."

Oh, do you want to know if Harvey is real or just in Elwood’s imagination? Sorry, I will not spoil it for you. Watch Harvey. Meet the nicest man in the world, and discover that whether or not Harvey is real, is actualy irrelevant. 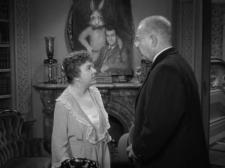 Harvey is one of those famous classic movies that I'd never seen all the way through. I remember seeing bits of it as a kid and I remember the famous ending, but until now I'd never seen it all and I'm sorry it took so long, because it deserves all of the acclaim it has been given.

There's a line from The Hitch-hiker's Guide to the Galaxy that says, "I'd far rather be happy than right." and that line easily applies to Elwood P. Dowd. As he puts it, his mother told him that he could be either smart or pleasant. He tried being smart for a few years, but now he'd much rather be pleasant. Almost everyone in the movie might think that he's crazy, but not one of them is as happy as he is.

Josephine Hull is a delight as Veta. Of course insanity doesn't just run in her family, it gallops, as anyone who remembers her in Arsenic and Old Lace will undoubtedly recall. She along with all the other supporting characters bring added humor to the movie. I particularly like Myrtle Mae and how she latches on to Mr. Wilson, the first man even close to her age that enters the house. I also enjoyed the scene between Elwood and the Doctor when the doctor tells Elwood what he would do if he had access to a Harvey and how Elwood can't see why he'd want beer instead of whiskey and how Harvey's never said a word against Akron that he can remember.

This is such a simple and yet joyful movie. There's very little conflict because to Elwood conflict simply doesn't exist. And its message, like you said Eric, that just because someone is a little different from everyone else doesn't make them crazy, is a nice one.

When it comes to a list of the greatest feel-good movies of all time, Harvey has to be near the top of it. 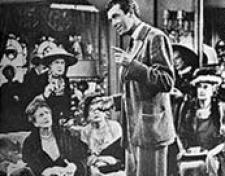 This movie looks and feels as if it takes place inside a giant B & W Easter egg.

Like Scott I had never watched this movie before from beginning to end, but there were several scenes that I had distinct memories of from my childhood. I remember the stately old Dowd mansion and the oil painting of Elwood and Harvey. I was surprised to see that this movie was originally released in October because I had always associated it with Easter. Harvey is like the Easter Bunny after all. In fact this entire movie looks and feels as if it takes place inside a giant black & white Easter egg. It certainly has a magic and charm that is all its own and Stewart is wonderful. My favorite moment between Elwood and Harvey is near the beginning at a bar. A guy leaving points in Harvey’s direction and tells the bartender that the one at the end of the bar will pay for his drink. Elwood checks with Harvey and then without missing a beat answers, “He’d be delighted” in the most cheerful manner. Delighted is how watching Harvey made me feel.