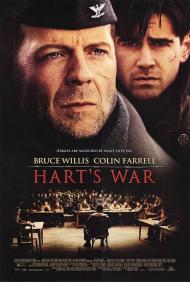 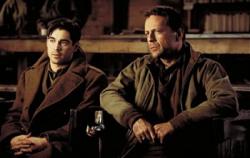 Hart's War is a movie about honor, loyalty, alliances and bigotry. As with most war films, it shows us the stress military men so often find themselves under. These men are prisoners of war, dealing with interrogations and circumstances that are out of their control.

It starts with Lt. Hart, a young officer played by Colin Farrell. While driving someone back to the front he gets captured by the Nazis, interrogated, and sent to a POW camp. There he meets a Colonel, played by Bruce Willis, who has the Lt. bunk in the enlisted men’s barracks. This causes a few eyebrows to lift, but not as many as when, a few days later, two Tuskegee black pilots arrive at the prison. They are met with curiosity and some outright racism.

I understand that the military was still segregated then and the idea of bunking whites and blacks together was something rare. However, the racism seems a bit forced for plot sake. Sure, racism was prevalent then but the Nazi’s were the enemy, not a fellow American. Nothing binds two different people together better and faster than a shared common enemy.

The most vocal bigot in the barracks is soon found murdered and one of the Tuskegee pilots is accused of his murder. The Colonel assigns Lt. Hart to defend the pilot, with much of the rest of the film being the subsequent trial.

The previews for Hart's War show explosions and Bruce Willis saying something about 35 men escaping, with some quick shots of men climbing out of the tunnel. That preview is very misleading as Hart’s War is not an action film. One scene has the train carrying the POWs getting bombed. It is dramatic and exciting but has little to do with the plot. The tunnel and the escape, although let known in the previews, are not even in the film until the last half hour. The trailer gave away what is intended as part of a big plot reveal.

This film was publicized as a war flick but is a pretty decent drama. All of the characters are portrayed as flawed and very human, including the Nazi Company Commander. Colin Farrell does a legitimate job as the nervous Lt. who finds his voice when acting as a defense lawyer for the accused Tuskegee airman. This is potentially a star making role. His small brown eyes express a man trying hard to prove himself even though he knows some of his weaknesses have been exposed.

Bruce Willis can play two characters. The first one is a cocky smart ass, and the second is serious and hardboiled. Here he plays the latter. You will not see his trade mark smirk here as he walks through this supporting role like John Wayne in any number of war films.

Terrence Howard is decent as the accused pilot. When he is on the stand answering questions, he starts pontificating about how Nazi prisoners were treated better in Alabama than African Americans. True or not, the soliloquy is more of a social statement than a plot development. I found it interesting that this movie humanizes the Nazi Commander by showing him drunk and making reference to his dead son, while the American bigots are narrow minded and, at best, defiant of authority.

Although Hart’s War is a worthwhile tense war time mystery/thriller, the stereotypes are a bit trying and it stretches believability a bit too much. In real life, 32 black Tuskegee airmen were captured and became prisoners of war. I imagine every one of them has a story worth hearing. Theirs are some biographies I would like to see. 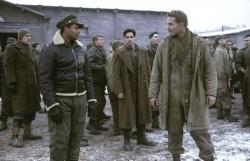 I have never liked Bruce Willis much. Here he looks the part but has very little real acting to do. His change of heart scene at the movies conclusion is not believable at all. He goes from being a selfish bastard to a noble hero in a split second.

Colin Farrell is the heart of the movie. Literally and figuratively. He gives a great performance as the conscience of the American soldiers.

I wasn't at all bothered by what Eric refers to as Lt. Scott's pontificating on the stand. Sure it's a social statement more than a plot device but it makes sense that he would choose this opportunity to speak out about an issue that obviously has affected his life in a major way.

Terrence Howard is a very underrated actor. Usually he plays bad guys, so it is nice seeing him as a hero in this one. In the end though, Hart's War is just another WWII POW movie. It has the prerequisite stereotypical Nazi Colonel. The secret tunnel used to escape. It really breaks no new ground and doesn't threaten the image of Stalag 17 which is probably one of the best of this type movie ever made.

Hart's War attempts to be a thinking man's war movie. It has relatively little action. Unfortunately the ending is a little too pat. It plays out as if Bruce Willis insisted on having his character be the hero in the end even though it would have been better and more believable if he had remained the bastard that he is portrayed as in the rest of the film. 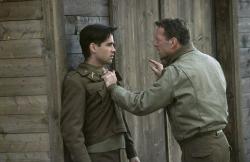 Personally, I don't find it very honorable to sacrifice a man's life so that a Colonel, desperate to get back into the war, can blow up an ammunition dump. Particularly when the whole court martial is apparently so pointless. The prisoners of war seem able to come and go as they please, and even hide an enormous tunnel project, yet for a distraction to the actual escape, they decide to stage this enormous trial, which involves a man's death. It is such an obvious plot device to add drama, that it makes the escape plot, completely ludicrous.

As for Lt. Scott's statements on the stand, I think it's best to remember that as far as he knows, this could be the last chance he ever has to make a statement. These are his last words, so they hardly seem out of place.

I actually enjoyed this movie right up until Hart discovered the real reason for the trial. The plot unravels quickly after that. As I said, no legitimate reason is given for the trial being the only cover for an escape attempt, Colonel McNamara is able to get to the ammunition dump and blow it up in just a matter of minutes, and Hart's taking the blame for the murder may have had honorable intentions, but instead it just means that the escape is discovered immediately.

My point of disagreement with Eric is that not knowing the tunnel scene was coming would have made this a better movie. I wasn't aware it was coming, and it didn't help the movie, it hurt it.