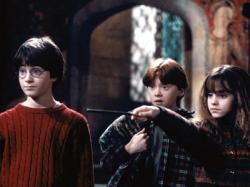 Anytime they make a movie based on a beloved novel, there is the worry that they won't get it right. This is probably because reading a book is so much more personal than watching a movie. When you read, your own imagination decides what the characters look like based on the writer's descriptions. In a movie, you are shown exactly what the characters look like along with the settings, backgrounds, props, etc. Rarely does the filmed version of any book live up to the imagination of the average reader. That is...until now.

With Harry Potter and the Sorcerer's Stone,  Chris Columbus takes us inside the magical world so masterfully created in writing by J.K. Rowling. Here in vibrant color and vivid detail are the spires of Hogwarts School of witchcraft and Wizardry, the Hogwarts Express, Hagrid's cabin, and the Quidditch field. Here also are Harry, Ron, Hermione, Snape, Dumbledore, Uncle Vernon, Draco Malfoy, and all the rest of the characters, brought to life by a cast so perfect, you'll think they walked right off the written page. I couldn't find one mis-step, one wrong move, or one disappointment in the transition from print to celluloid. Well maybe one. The movie is a little long, clocking in at 2 and 1/2 hours. Why couldn't it be even longer? Then we would have been able to see even more of the details from the book!

Before seeing this movie, I read many of the reviews written by critics who saw the premiere or advance screenings. One of the things cited in many of these reviews was Chris Columbus's slavish devotion to the book and his lack of originality. Of course these things are written by those very same people who would have jumped all over him if he'd dared to change anything from the books! He had to remain true the book. He had millions of fans who know the source material by heart. Too many changes and he would have disappointed all of them. Now that the series is up and running and soon to be a franchise, now he'll be able to make more changes, and considering the lengths of the other books in the series, he will be forced to make changes and trim sections. Plus, it's not as if he didn't make some changes from the book in this incarnation. Mostly these are small trims in the plot to speed things along, but they are there.

Even with this spot on adaptation of the novel, the film might still not have worked were it not for the cast. From Daniel Radcliffe as Harry, down to John Cleese as nearly Headless Nick, there is not one person cast who is wrong for their part. So much so, that like Sean Connery as Bond, whenever I read or re-read a Harry Potter book, I shall picture the characters as these actors.

And for the parts where actors alone can't do it, the special effects take over. Today that means one thing, Computer Generated Graphics. There are a lot of CGI shots in this movie, as you well might imagine, and they all work wonderfully. They whisk our heroes around on broomsticks, chase them in the shape of a three headed dog, swarm upon them as thousands of keys, and a million other things. Most importantly, the effects do all this without once getting in the way of the characters or the plot. Like all the best movies, they serve the story rather than becoming the story.

Obviously, I am a fan of the Harry Potter books and I loved this movie. How will people who aren't fans of the books like this movie? Or people who've never read this book, what will they think of it? Well first, if you've some how read the Potter books and didn't like them, I don't really care what you think of this movie, as obviously there is something seriously wrong with you. As for not having read them at all, I can't really say what you will think. The story, particularly the beginning, is shown quite quickly, but is still easily followed. I would imagine someone coming to this movie for the first time would still be able to watch and enjoy it. But what the hell are you waiting for? Read the book, then go see the movie! In any incarnation, Harry Potter is pure entertainment. 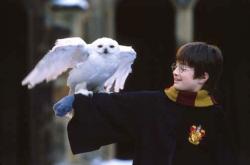 Daniel Radcliffe in Harry Potter and the Sorcerer's Stone.

Scott is right that 'Harry Potter is pure entertainment' and although his review is a bit extreme in its rush to praise, anyone who knows my brother will understand that this is quite possibly the perfect cinematic vehicle for his tastes.

As stated the cast is marvelous. Using unknown actors in the children's roles and contrasting them with an elite group of veteran thespians as the adults was a masterstroke. Especially appealing are no less august talents than Maggie Smith and Richard Harris as Professors McGonagall and Dumbledore.

The direction is fine, it isn't particularly inspired but neither does it detract from the movies enjoyment. The guy simply did his job and with the eyes of the world on him deserves credit for at least avoiding the many pitfalls which could have easily destroyed this effort.

My one complaint is that in my humble opinion a few of the special effects are a bit on the cheesy side. Most noticeably Fluffy the three headed dog seems a bit exaggerated and the quidditch match is overdone as well. In terms of the films enjoyment level these are certainly minor points but any movie that expects to hold our attention for over two and a half hours should expect some nitpicking.

Not since Gone With the Wind has a movie of a beloved book been anticipated this much. GWTW the movie has eclipsed GWTW the book in our culture. Will Harry Potter do the same thing? I don't think so. But only because the books are so damn perfect. 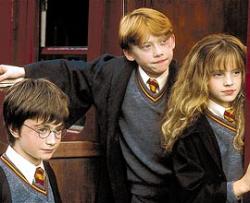 A year ago I attempted to read Harry Potter and the Sorcerer's Stone to my then six year old. It proved to be a bit difficult for him to follow. Now after taking him to see the movie, he and I are excited to start the book again. This film is the most entertaining children's movie since Willy Wonka and the Chocolate Factory. Like Willy Wonka, Harry Potter is filled with wondrous imagination and incredible detail. Where as the children explored a magical factory in Wonka, in Harry they explore Hogwarts Hall. These British films have much in common, such as both are based on books. Where they greatly differ, and perhaps makes Harry Potter better, is that it's plot can be enjoyed by adults much easier than Willy Wonka's simple fantasy of all the candy you could want.

I agree with Patrick on the casting of veterans along side unknowns. It was fun picking out actors and actresses I had seen in other movies. The entire cast is British so unless your a fan of British movies, like Scott, you may not recognize that many. The actor who played Harry Potter did a great job. He seemed to be down playing the whole time, and it worked brilliantly. I only hope they can finish all the movies before he is to old to play the part.

The one and only complaint I have heard about this movie is that they left many parts out that were in the book. At two and a half hours the movie was long enough. A lot of things in the film were simply there for atmosphere. The wondering ghosts and the moving paintings. The main thrust of the plot was fine and I felt nothing was left out that will not be further explained in upcoming years of Harry's schooling.