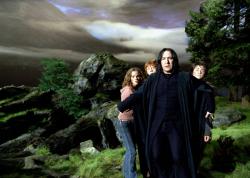 While the first two Harry Potter movies were pure entertainment, they owed all of their magic to the books that they followed so closely. Not daring to offend the legion of Potter readers, director Chris Columbus remained laboriously faithful to J.K. Rowling's writing. Now with The Prisoner of Azkaban – the third in the series – under the helm of director Alfonso Cuaron, the Harry Potter movies have taken a different and more independently interesting turn, becoming entertainment in their own right.

Still, despite the shifting of certain elements and the trimming of most of the side plots, the main thrust of the story doesn't differ too much from its source material. It still centers on Harry's third year at Hogwarts with the escape of murderer Sirius Black (Gary Oldman) being the main cause for gossip in the wizarding world. Black was imprisoned for aiding the villainous Lord Voldemort and for murdering at least one wizard. It also comes to light that Black may have had a hand in the death of Harry's parents and now that he's escaped, is looking to do the same to Harry himself.

It isn't just the changes to the plot that make this installment stand out. It's the change in mood. The characters, and the actors, are getting older and are able to express more emotion; the visual imagery is much darker, making it more pleasant for adults, without going too far, so that it is still suitable for children. Hogwarts' castle grounds, filmed on location this time around in Scotland, instead of on claustrophobic sets, and the more modern wardrobes of the students give the movie, a more realistic, less artificial look. The hooded dementor guards are eerily spooky to such a degree that it's difficult to picture them ever having appeared in the earlier more sanitized Columbus directed films.

The adult actors in the series have always been first rate, representing a veritable who's who of notable British stars of stage and screen. This time around, along with the usual cast, we have the delightful addition of Emma Thompson as Professor Trelawney. Her small, but key scenes offer several of the movies' lighter moments, as well as one dark one. It will take some getting used to seeing Michael Gambon in the role of Dumbledore that the late Richard Harris played so well. The transition wasn't aided by the cumbersome and often times overdone lines that Gambon is saddled with saying and that don't gel with the added realism of this installment.

One of the greatest side benefits of this new interpretation of the Harry Potter books is that this installment, although based on a much longer book, actually clocks in at nearly 30 minutes shorter than the first two movies. The shortened run time really helps with the pacing and keeps the story flowing along at a nice clip.

My only regret with this film is that it is the only one Cuaron is going to direct. While Mike Newell, who is directing the next Potter, is a decent director, it's hard to imagine the man behind 4 Weddings and a Funeral and Mona Lisa Smile continuing in the same dark vein that Cuaron began to mine here. 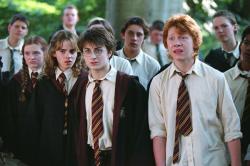 Emma Watson, Daniel Radcliffe and Rupert Grint in Harry Potter and the Prisoner of Azkaban.

Whereas Scott enjoyed the quicker pace, I found it confusing. The movie changes scenes so quickly that it is sometimes a chore to keep up with what's happening.

Early in the movie Harry runs away from home. He takes a bus to The Leaky Cauldron, a wizard's tavern. There, he meets Ron and Hermione. Did I miss something? When was it arranged that this meeting was going to take place? I did not slip out of the theatre for any reason. I was not distracted, so exactly when was is established that the three main characters would meet up at this exact spot at this exact time. No doubt the book explained it better.

The Harry Potter movies have grown on me so much. Never has a movie series aged it's characters and maintained the entertainment quality so well. Thanks to Rowling, the plots are maturing right along with the characters.

This movie is definitely a film where you must pay close attention. I have not read the books but was able to keep up most of the time. My 10 year old has not read the books either. He was completely lost. He said that if he were doing this review it would get 2 stars. However, I liked this movie very much. I will give it 3.5 stars. 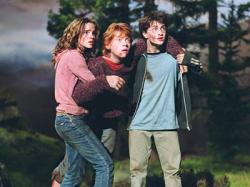 Emma Watson, Rupert Grint and Daniel Radcliffe in Harry Potter and the Prisoner of Azkaban.

With the first Potter movie the decision to adhere as close as possible to the written word was understandable, the characters and the world they inhabit needed to be introduced and even more important was the risk of disappointing fans of the universally popular books. With the resounding cinematic success of Sorcerers Stone, however, this was no longer necessary, and proved to be a mistake in the less entertaining Chamber of Secrets. Thankfully with the third movie this is not the case. As the books keep getting longer it would become more and more impractical to try including every little detail. With Prisoner of Azkaban director Alfonso Cuaron keeps the pace flowing by skimming by a few minor sublplots. And though the faster pace may be a bit confusing for those like Eric who haven't read the books, for those of us who have it is a big improvement.

I was at first surprised by the choice of Cuaron. The only movie I had previously seen by him was the sexually explicit coming-of-age story Y Tu Mamá También. It is quite a leap from that to Harry Potter but he makes it smoothly. I assume he influenced the refreshing decision to recruit many more minority students at Hogwarts this school year. That and the more modern clothing add a sense of maturity and realism to the story. I also agree with Scott that the exteriors on the castle grounds are much more effective than the sets used previously.

Another advantage to this installment is that it is from one of the best stories thus far in the series. In interviews J.K. Rowling has said that she was in a great place when she wrote it and that the process was smooth. This is especially evident during the creative and exciting final thirty minutes or so of the movie. It was brilliantly written in the book and the brilliance translates well to the screen. I won't give it away but it deals with time travel in what just might be the most original and unique way ever in a children's movie.

The three young actors at the heart of this franchise have really grown into their roles. Ron is getting tall and rather awkward just like I picture him in the books. Hermione is becoming quite a pretty young lady with extraordinary courage and brains. But this movie belongs to Harry. He gets to express anger, frustration and sadness in much more adult ways this time around. He is evolving into an interesting and complex screen hero.