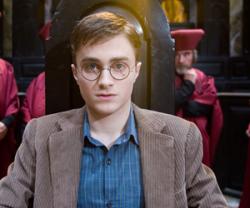 Daniel Radcliffe in Harry Potter and the Order of the Phoenix.

The longest book becomes the most streamlined Potter yet. And though more is missing from this adaptation than any in the series, this is the best movie to date. What a great example of book to screen morphing. Till now the best of the franchise was Prisoner of Azkaban but Order of the Phoenix tops that.

Harry finally comes into his own as a hero.. He's a bit angrier but he stands on his own. Ron and Hermione take a back seat this year. Neville grows in importance and the introduction of Luna Lovegood seems timely. Things are definitely building to a climax.

Can't wait for the next one!!

Evanna Lynch as Luna Lovegood in Harry Potter and the Order of the Phoenix.

This is the best of the Harry Potter movies so far. Credit for this has to go to screenwriter Michael Goldenberg who takes over the reins from Steve Kloves (who wrote all of the previous adaptations). Goldenberg and new-to-the-series director David Yates have created a fast paced version of the book that hits all the right key points in the script. It feels like a complete story rather than a Cliff's Notes version, as some of the earlier films felt. Unfortunately, only Yates will be returning for the next film, Kloves is returning to write the next installment of the series; Harry Potter and the Half-Blood Prince.

If for some incredibly insane reason you haven't read the book (and if so, why the Hell not, you idiot!?!), the plot goes something like this.

Following the return of Lord Voldemort, Albus Dumbledore has reconvened the Order of the Phoenix, which is sort of a resistance group that fought against Voldemort previously and intends to do so again. The Ministry of Magic meanwhile, refuses to believe that the Dark Lord has returned and instead claims that Dumbledore is really planning a rebellion against the government. This affects Harry directly when the Ministry installs Dolores Umbridge as the new Defense against the Dark Arts Teacher at Hogwarts School of Witchcraft and Wizardry. A thoroughly vile and despicable woman who hides behind a motherly facade and simpering smile, Umbridge is given powers by the ministry to basically control all aspects of school life.

Meanwhile, Harry is dealing with some really bad anger management issues, for reasons he can't explain, and also a bad case of puppy love as he receives his first kiss from Cho Chang, the girl he's had a crush on since Goblet of Fire. He's also been nominated by a group of students to be their "real" Defense Against the Dark Arts Teacher, since he's actually been out there, fighting evil.

All of these machinations and goings-on build to the climax of the film which involves a massive magical battle between Voldemort, his Death Eaters and the Order of the Phoenix. It also goes a long way to setting up the final two films.

As in the earlier films, this one introduces a host of new characters, most notably Umbridge and Luna Lovegood. Umbridge is played to perfection by Imelda Staunton. On the surface she looks like someone's kindly old maiden aunt, but beneath the facade, you can smell the malevolence. Luna, meanwhile, played by newcomer Evanna Lynch, steals every scene she appears in as the daffy Ravenclaw student who exists in a world of her own half the time.

With such long books, it's inevitable that any movie made from them would have to leave parts out. The only way to really do justice to every last detail of the books would be to make them into a television series, with each year at Hogwarts being one season on the show. However, what makes this movie so special is that for the first time in the series, I never once stopped during the movie to think, "Oh, they cut that bit." There's too much going on in the movie, at such a nice pace, that I simply didn't have time. I was far too busy simply enjoying the movie. 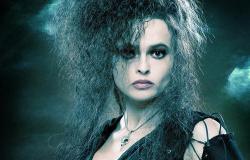 Helena Bonham Carter as Bellatrix Lestrange in Harry Potter and the Order of the Phoenix.

This installment does make some nice improvements in the movie series. Most notable is the extra screen time given to other characters. Mark me an idiot, but I have not read any of the books and do not intend to. Even without having read the books, I can tell where some plot lines are going. Neville will likely get some revenge on Bellatrix, played deliciously by Helena Bonham Carter. Luna will prove to be quite relevant to future events. Dumbledore will die. After having his "moment" in this film, his character has no where else to go. My last prediction is that Harry will end up as a teacher at Hogwarts.

Even though there have been some nice changes, the formula still remains monotonously intact. The movie starts again with Harry and his annoying family. Could not J. K. Rowling have softened these bigots a bit and given them some meager emotional arc? Once again the Defense Against the Dark Arts teacher is a quack. Once again Harry is teased with bits of incomplete information. Once again he comes close to getting Voldemort. Once again Hermione proves to be the smartest student. Once again Malvoy acts like an ass. Once again Harry feels like an outsider. Etc. etc. etc.

Am I the only person who watches these movies and thinks that they are all just remakes of the previous movie only with slightly older actors?