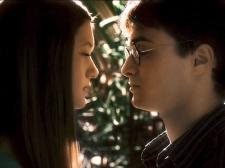 The title of this one could have been Harry Potter and the Hot-Blooded Hormones.

It wasn't until the third Harry Potter movie that they really came out from the shadow of the books. The first two movies were slavishly faithful in replicating JK Rowling's written words. The third film, Harry Potter and the Prisoner of Azkaban, was the turning point in the series. It was the first one that felt like an original movie and not just an adaptation. With Harry Potter and the Half-Blood Prince, the series continues that trend, carrying on the spirit and the general plot of the books, but not being afraid to add new scenes and change others. Certainly this installment ranks as one of the best in the series.

As you may or may not remember, the previous Potter film ended with Harry finding a prophecy that foretold that the only way he or Voldemort could live was for one of them to kill the other. In the process of obtaining the prophecy, Harry's godfather, Sirius Black, was killed and Voldemort's return was revealed to the Wizarding world.

Now, as another year at Hogwarts begins, Harry finds himself referred to as the Chosen One. Together, he and Professor Dumbledore set about learning more about Voldemort's past. Also Harry, Ron and Hermione all do battle with their hormones as each of them develops a crush on someone. Hermione likes Ron, but Ron is off snogging Lavender, so Hermione dates Cormac to make him jealous. Harry likes Ron's sister Ginny, but Ginny is dating Dean and Romilda makes a love potion in an effort to make Harry love her. All of the romantic entanglements make a nice lighter contrast to the darker matters that are taking place in the background.

As always in a Harry Potter movie, a new Professor is introduced. This time around it is Professor Slughorn, played memorably by Jim Broadbent. Slughorn is the new potions master and he's a bit of a social climber. He ingratiates himself with the more well-connected students hoping to extend his social circle to his advantage. He also possesses knowledge that Dumbledore and Harry need, which is up to Harry to wheedle out of him.

The Half-Blood Prince, the book, was most famous for its ending, where (*SPOILER ALERT*), a major character dies and the movie does end with that same death, but with much less of an emotional impact. I've always felt that the actor who plays this character was miscast and that the writers of the movie never really got the character right and this character appears much less in the movies than they do in the books and so has less development. It's still a good ending, but not as an emotional one as it could have been.

Being so familiar with the books, I do wonder if some of the plot elements are explained enough for those who have never read them. I felt in particular that the Horcruxes weren't explained as thoroughly as perhaps they should have been and that the scene in the cave felt rushed.

Although the movie looks amazing and the effects are great, it has always been the characters that give the story its heart. It's good to see that Daniel, Rupert and Emma have grown in their acting ability and they really bring their characters to life. In particular, Emma Watson has improved immensely as Hermione. In some of the earlier films, her acting was a bit stiff and wooden, but she's much better here. The supporting cast is also quite good. Helena Bonham-Carter brings life to Bellatrix and Evanna Lynch is perfectly cast as Luna Lovegood.

If the first two movies in this series had been original movies and not based on wildly popular books, I doubt they'd have been as successful. This one though, stands strongly on its own and is a great movie in its own right and a very worthy entry in the series.

Having never read any of the books and only seen the previous film once, I did have a hard time putting it all together. I forgot all about Sirius Black having died. I remember Bellatrix, but only because Carter looks hot playing a bad girl. I recall Voldemort makes an appearance, but have not a clue how and why. Is my memory that bad? Perhaps, or maybe these stories are just so redundant that they all kind of blend into each other so that it is hard to remember what happened in what movie.

The build up to Potter and Voldemort's showdown holds little interest as I know it will all come to a head in the last movie. Why get caught up in all the tease and denial going on now. I am tired of the foreplay already. Where is the climax?

With the Tom Riddle/Voldemort story line moving at a snails pace, I paid more attention to the goings on of the main characters personal lives. All of their love lives are giving them more of an education than any of their current professors. As Scott wrote, it provides for some lighter moments. My favorite line is when Ron asks Harry if he did it?

Not only do the students experience love and attraction to the opposite sex, but they also dabble in drugs. As they are wizards at a wizards school, the drugs are potions. Scott mentioned the love potion, but there is also a luck potion. Both have the effect of making the users act high. This creates some funny moments and it was nice to see Radcliffe have a few scenes where he actually acts giddy. He is usually always so serious.

I enjoy the Harry Potter movies. At two and a half hours, I never felt it dragged. However, I by no means find them to be perfect. Why does Hogwarts bother to have such strict security, when they let the students go to a pub outside it's walls without chaperones? Does anyone actually keep track of what is in Hogwarts? Assassins are trying to get in, maybe they should put a spell on the transportation cabinet so no one can use it to sneak in? Just a thought. Is it not just a little coincidental that two dozen kids already took their Potion books out of the cupboard before him, yet Potter ends up with the one previously owned by the Half Blood Prince? In 20 years no one has discovered that the real recipe is in that one? Do these wizard professors have a clue what is going on around them? I know I do not. 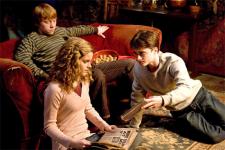 Ron, Hermione and Harry are growing up.

Eric, you should read the books. The movies are much more enjoyable if you do. Scott, you criticize the first two movies yet to date you have given every single movie four stars. Half-Blood Prince joins Order of the Phoenix as the best installments thus far, with Prisoner of Azkaban a close third. The other three movies are seriously flawed.

Scott, I disagree with you about Dumbledore. I think Michael Gambon captures him better than Richard Harris did. He is able to be serious when needed but also gives Dumbledore a kind twinkle in his eye that is essential to the character. Harry, Ron and Hermione all continue to grow as actors but this movie belongs to Alan Rickman as Severus Snape. After Harry and Dumbledore he is my favorite character in the entire series. I have also always enjoyed Maggie Smith as Professor McGonagall although she has very little to do in this one. And did anyone else notice how much Maggie Smith has aged since the last movie?

The pacing and emotional arc of the last two movies has really improved the series. I can’t wait for the final two! Just picturing the Battle of Hogwarts gets my cinematic daydreams flowing.